Expertise is the key for The Planning Centre in a wild Windsor market. 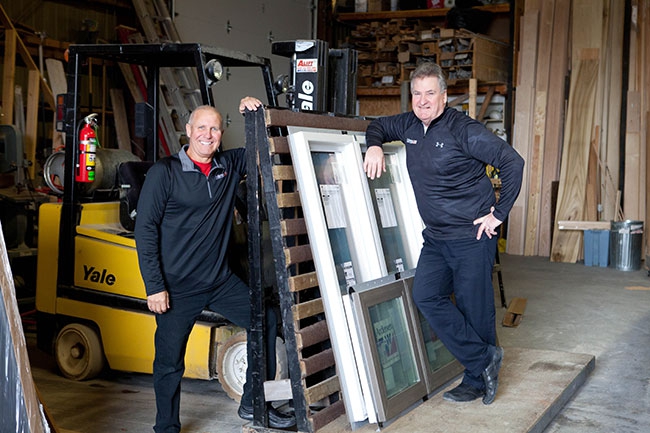 The know-how to work with architects to create high-quality custom products has been the secret to success for Marc Rivest and David Johnson. Business in Windsor can be a roller coaster ride, but great relationships have kept them afloat even as the economy fluctuates.

Ask Marc Rivest and David Johnson how they decided to celebrate more than three decades in business together, and you’ll get a rather candid answer: “With a case of beer,” Marc jokes.

“But really, we had no flamboyant celebration. We just strive in our business to keep moving forward every year.”

Co-owned by Marc and David, The Planning Centre is a Canadian mainstay in the industry. Located in Maidstone, Ont., the company has been helping customers in Windsor and surrounding areas “make the right decisions on windows and doors” since 1985. In 2017, The Planning Centre enters its 32nd year.

Filling a market need
Marc and David, both engineers by trade, first created The Planning Centre in response to a lack of higher-end products in the consumer market: windows and doors that would meet architectural as well as engineering requirements for larger custom homes. “We approached the Andersen distribution and wholesale division, who didn’t have any distribution at the time in Canada,” says Marc. Based on Marc and David’s business plan, Andersen agreed to once again entertain a Canadian dealer. “Andersen had been absent from the Canadian scene for a period of time.”

The distribution went from Andersen to a wholesale division just outside of Detroit, which then went to a dealer and then to retail or consumer-direct. Being located close to the Canada-U.S. border, “we could go across every day and pick up products from our wholesaler,” says David.

More than three decades later, Andersen is The Planning Centre’s main line for products today. “Some companies have gone out of business since then, but Andersen still represents 80 per cent of our business today,” says David. With such a wide product line, it’s no surprise The Planning Centre’s website claims that “we can find something for just about any project, whether you’re just replacing a door, or building your dream home on the water.”

The savvy consumer
If there’s one big change The Planning Centre has seen between 1985 and now, it’s the end user. “Thirty years ago, we did a lot of retail direct,” says Marc. “Regulations were pretty lax back then, so people were building homes themselves and acting as the home builder and contractor.” Today, The Planning Centre still does a fair amount of retail, but “with more restrictions in the building industry, we now work mainly with contractors,” says David. Still, consumers are continuing to play a role in the decision-making process by taking on much of the window and door shopping themselves.

“They’re definitely doing more investigative work than they used to,” says Marc. “Today’s consumer is much more savvy and well-read than ever. They research things. They want to be full of information when they make large-ticket item decisions, and ensure they’re getting quality. That’s something we didn’t see much of 30 years ago.”

Marc and David attribute this evolution to two things. First, with the rising cost of utilities and continuously changing building codes, consumers are increasingly conscious of making their homes as energy-efficient and “air-tight” as possible through careful selection of products like windows and doors. Second, consumers are feeling inspired by the expansive range of designs featured in magazines, on Pinterest and Houzz. “The impact of all that is fuelling the consumers’ need and want for customized windows in a whole range of shapes,” says David.

As custom windows and doors are The Planning Centre’s specialties, “we’re now making windows for customers that are bigger and taller than ever before – like bi-folding, retractable walls up to 40 feet long and 10 feet high,” David adds. Consequently, driven by homeowners and consumers, the installation market now makes up a large portion of The Planning Centre’s business today. “I’d say it’s expanded 10-fold since the mid-1980s,”  Marc estimates.

Product and technology changes
Of course, three decades has seen an evolution in window and door technology, a fact Marc and David cannot overlook. According to Marc, the biggest transformation is in glass. “I remember Andersen used to have two panels of glass welded together that were very well built but very inefficient energy-wise. I know a lot of that glass is still performing today but it’s offering very little efficiency. So, obviously, the technology has had to change.”

Materials have evolved too, adds David. “There are more synthetics now. The wood-clad market has gone through a huge change. Customers expect more and want better performance.”

Finally, the availability of more colours has also pleased customers over the years. “It used to be that all you had were brown and white windows. That’s all that Andersen offered. Now, we have up to 55 standard colours and custom colours available.”

The know-how to work with architects to create high-quality custom products has been the secret to success for Marc Rivest and David Johnson. Business in Windsor can be a roller coaster ride, but great relationships have kept them afloat even as the economy fluctuates.

The secrets to successs
Now in its 32nd year, The Planning Centre continues to be a small team. It has only five full-time employees and hires the occasional part-time worker. Marc believes the company’s size is part of its success. “I think we’ve been able to survive the last 30-some years because we’ve kept the company as small as possible,” he says.  Having an engineering background allowed Marc and David to keep the business small. “We wore all the hats from the very beginning,” says Marc. “We would unload the truck, reload it, do site set-up and installation when needed – basically, whatever needed to be done, we would do it. And we still do it today.”

David points to healthy relationships with their Andersen sales rep and the ability to connect with Andersen’s technical support department as another key factor in The Planning Centre’s success. “We have always understood the importance of being technically savvy, so we can go out there and work with builders, architects and designers for an end-result that’s positive,” he says. “It’s a hard market to break into at that level where you can put forth a product with both service and product knowledge,” he adds. “But over many years, we’ve built a rapport with architects, builders and designers to the point where we have a very strong network – one where when the job is done, it reflects well on everyone involved.”

The strength of that network is built on The Planning Centre’s well-known commitment to service. “Builders like to send other customers to us because of our knowledge not only regarding blueprints and ideas for products we can provide but we also offer a really good service, and we always have,” says Marc. “We provide a more hands-on, personal service than most. Part of that is because we are in an office where we can stock parts and pieces and where people can walk in. Many of our competitors have no showroom. Having a physical presence makes a big difference.”

“We have people calling us to get old Andersen parts and pieces that we keep in stock and that date back as far as 1940,” adds David. “This is an all-around service we can provide that not many other window and door businesses can.”

Marc and David also believe that good old-fashioned communication makes a difference. “Everybody gets so caught up in electronic world, but we’re now seeing a resurrection of face-to-face interaction, where everyone – us, builders, architects and others – are going to meetings and making a point of being on-site. That’s been a really positive thing over the years as well and we’ve gotten a lot of respect from people because of it.”

Finally, being Canadian may also play a role in The Planning Centre’s longevity. Most of the company’s customers are in southwestern Ontario, not far from home. “We like to work in our own backyard; we don’t want to step on our fellow Andersen dealers’ toes and try to stay out of each other’s way when it comes to getting business,” says Marc.

“Andersen has even remarked that our Ontario Andersen group has its own identity,” adds David. “We interact well with each other, share information and help each other in business. It’s more or less an open dialogue that we have with our fellow dealers. From a business standpoint, I guess most don’t operate that way!”

To the future
The Planning Centre continues to evolve, thanks to another generation. “My son is coming into the business, as all of our kids have,” says David. “He’s going to help us expand the business from a more ‘millennial’ angle, and incorporate some newer ideas with his background.” Meanwhile, David and Marc will continue carrying on the same business structure and keeping their regular day-to-day routine, all while taking things to a newer level.

“We want to keep bringing new, fresh products into our showroom and to stay on the cutting edge of technology and style,” adds Marc. “Plus, we want to continue to increase our highly trained staff so we’re positioned in the next five to 10 years to transition into retirement. That’s our goal.”