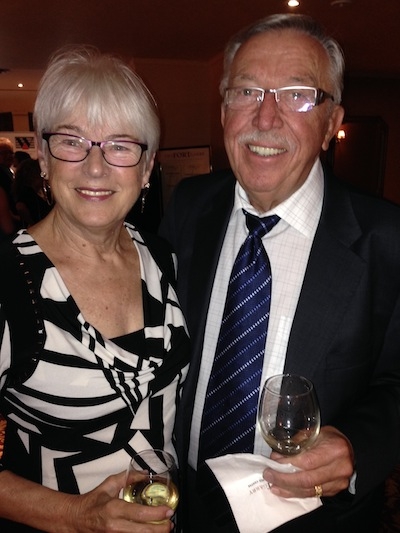 June 19, 2014 – At the President’s Dinner at the Fenestration Canada Annual General Meeting, Bill Fast, founder of Willmar Windows, was recognized for lifetime achievement with the C.P. Loewen Award. The award recognizes achievements in window manufacturing, leadership in innovation and market development, engagement with Fenestration Canada, family ties and philanthropy.

Al Dueck of Duxton Windows and Doors presented the award, having worked for Fast early in his career. He pointed out right off the top that the award really was going to both Bill and Margaret Fast, as Bill’s wife had always had an integral part in the business. Even the name of the company is an amalgam of their two first names.

Dueck chronicled the growth of Willmar from a small office and shop space to the sprawling 250,000-square-foot factory now owned by Jeld-Wen. At its peak, Willmar employed around 1,000 workers. According to Dueck, Fast was always bringing in new technology, often before others were even aware of its existence. Willmar was one of the first to offer PVC windows in Manitoba and an early adopter of heat mirror glass and fiberglass-reinforced frames. Fast also pioneered new finish options including copper-clad windows.

Fast embraced a radical concept at the time of going to market through exclusive distribution, taking the number of dealers Willmar authorized from about 800 to fewer than 80. Everyone thought he was crazy, Dueck said, but the strategy proved successful. Willmar made other moves that were later copied by others, including putting local manufacturing facilities in strategic locations, launching a separately branded replacement/renovation division called Hi Therm, and bringing PVC and heat mirror technology into the northern U.S.

Fast’s engagement with his family took up a large part of Dueck’s comments. The Fast family was heavily involved in all aspects of the business, and were known by just about anyone who became involved with Willmar.

Bill Fast and Willmar supported IDE, a charitable organization dedicated to improving access to water for farmers in some of the poorest parts of the world. Dueck noted that IDE has become a very large and influential charity since Fast’s initial involvement, and that it is dedicated to helping others help themselves rather than just giving handouts.

Bill and Margaret were on hand to accept the award. Fast thanked the Fenestration Canada executive and said he was fortunate to have worked in such a rewarding industry. He remarked on his relationship with the late Cornie Loewen and said he felt honoured to be recognized with an award bearing that man’s name.