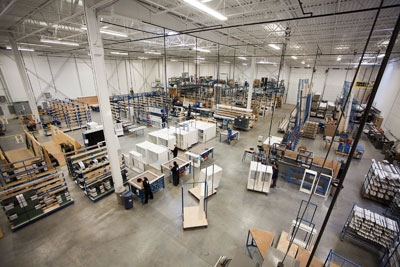 In his 35 years in the window and door industry, Mike Greco has seen a lot of colleagues and competitors go down.

In his 35 years in the window and door industry, Mike Greco has seen a lot of colleagues and competitors go down. That is why he and his brother, Peter, have built their Woodbridge, Ont., vinyl window fabricator, Vinylguard, around a philosophy of sweating the small stuff. The Grecos are careful who they deal with, careful with their company’s expansion and, most of all, careful with their product. The mantra of care and control has been successfully passed along to the next generation of Grecos, general manager Peter Jr. and Mike’s son, marketing manager David. Yet while the Grecos freely admit their approach is cautious and conservative, it allows them to make some of the most aggressive warranty promises in the business.

Mike and Peter Greco got into glass tempering in the late-1970s at Tempglass Industries, learning the business from Ian Moore and Wayne Metcalf. It was a new process at the time. They took that knowledge to United Windows. That experience was an excellent grounding for the brothers in the challenges of the industry. “When they were making all those wood windows back in the boom years,” Mike remembers, “we would service them. Going in there and fixing all the air leaks and drafts and failed sealed units and so forth. So we knew them very well from that.” This experience led United to ask them to start producing IGUs for them. The Grecos partnered up with two other fabricators, one of whom was Toro Aluminum. Together, they grew a successful business making IGUs for both residential and commercial projects.

In 1991, the Grecos saw opportunity in another technology that was just gaining popularity at the time: vinyl. They began fabricating vinyl windows under the name Vinylguard. In 1996, the DiBiaso family sold United to Jeld-Wen. Toro began to focus more and more on commercial and large multi-family projects. Initially, the Grecos sourced extrusions from Enerpro in western Canada, but found the logistics difficult. So they made a connection with an industry contact who would prove critical to the fortunes of the company for many years to come: Vic De Zen, owner of the former Royal Plastics. “He was the guru of vinyl back then,” Greco says. “There were not any other real sources for vinyl that were Canadian made.” Greco remembers that extrusion suppliers used to be eager to help new fabricators get started. “They would loan the equipment and make some deals where you manufacture the windows and buy the vinyl. They would loan the equipment, but give it more or less as a gift if you buy the vinyl.”

Vinylguard single-sourced its extrusions from Royal for 15 years until Royal was sold to Georgia Gulf in 2005. De Zen vanished from the scene for several years, only to come roaring back in 2008. He started Vision Extrusions Group and built a million square feet of plastics manufacturing plants on a huge plot in Woodbridge. Vinylguard’s plant is actually attached to one of Vision’s extrusion plants. “With our history and the support given and taken over the 15 years we were with him, it just made sense to move back to him as opposed to Royal Plastics,” Greco explains. “Vision has taken a lot of the employees that were with Royal, all the people we knew, so all you are doing is changing from an American extruding company to Vision, which is Canadian and right beside us.”

Greco’s loyalty has paid off. His fabrication shop now sits next door a state-of-the-art extruding facility that is owned by an old friend.

Vinylguard moved into its current 40,000-square-foot facility in 2009, leaving its original location on nearby Arrow Road. The company had run out of space there, but the chance to relocate so close to its main supplier was the big driver of the move. “We go next door with a forklift to pick up our extrusions and bring them back,” Peter Jr. explains. “It is perfect. It is almost easier to walk over there as opposed to calling and finding out what is in stock.”

Vinylguard produces casement, awning bay and bow windows in-house. Peter Jr. says they get so little call for tilt-turn designs that they don’t do them. They also distribute steel, wood and fibreglass doors, as well as patio doors. “I think the trick is to be diverse enough that you have new construction, replacement, custom homes, building supply centres and some local stuff,” Mike says.

When discussing business strategy, the Grecos return again and again to one theme: control. Mike learned early the importance of working only with the right people under the right circumstances. “When we started, we started in the recession years, so it was pretty tough,” he remembers. “The most difficult part was manufacturing and not getting paid. There were large real estate companies like Bramalea and Olympia-York going down, plus all the little guys. We weathered that and it taught us to be conservative and very selective on who we sell to and who we partner up with as dealers or distributors of our products. You are farther ahead to sell less but make sure you are going to get paid.”

Peter Jr. echoes the sentiment. “We have full control of every product that is on the floor at all times. If you get a dealer who is installing a window on Tuesday afternoon on the second floor and he drops it and he has taken the old window out and it rains, he calls. Within an hour, we can have that identical window made and ready for him to pick up. We have full control over our manufacturing process. A lot of companies out there, if that happened, it goes into the system and your standard is a two-week lead time.

“Attention to detail and relationships,” he continues. “Everybody in the vinyl industry has a lifetime warranty. Everybody. But if you have a 50-cent cam lock that breaks with our competitors, you call the company and they say ‘Absolutely, that cam lock is warrantied for life.’ It is $150 to send the guy for labour and travel. But the part is warrantied for sure. Ours is all-inclusive for material and labour. So if you have a sealed unit that is faulty, the unit is no charge and the labour is no charge and the travel is no charge.” Vinylguard can offer these generous terms because it takes care to produce a good product and to sell only to dealers who will install it properly and pay on time. Care and control – it is surprising how these simple principles can transform a business.