Articles
Centra Windows believes employees should be owners too 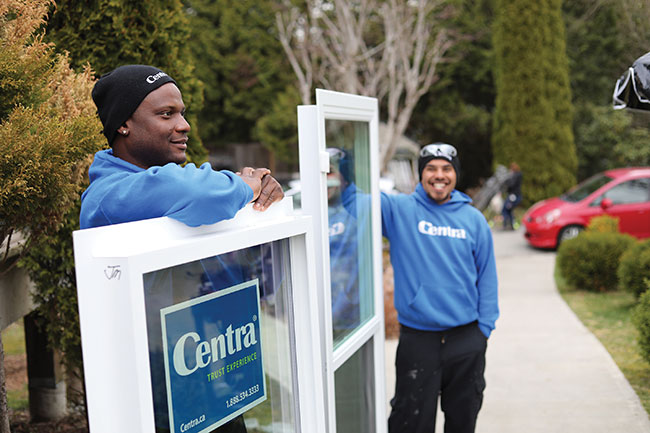 As well as expanding Centra’s territory, the acquisition also offers the Calgary team of about 70 the opportunity to become employee owners – a model Centra says is central to its success. It was also a major selling point when the Supreme board decided who would acquire the company.

Centra, which has recently won both Canada’s Most Admired Corporate Culture and Canada’s Best Managed Companies awards, was founded by John Tilstra in 1984. Shortly after, he invited his colleagues to buy a stake in the company and exercise what Centra refers to as their entrepreneurial spirit. “To see so many people be afforded the opportunity to invest in themselves and their peers through the employee ownership model of Centra is really rather special,” says Garett Wall, president and CEO of Centra Construction Group, in a Q&A that Centra shared with Fenestration Review.

Ninety percent of the company’s 455 employees participate in the voluntary program, according to Wall. The company offers a share match scheme, doubling the employee’s investment up to a certain amount. Centra also supports their ambitions by teaching them some of the finer points of entrepreneurship. “Entrepreneurs are very driven individuals, so we try to coach them. We have a leadership development program that 12 to 14 people per year go through. We meet for a full day, multiple times a year, and we go through the key areas of what it’s like to be an entrepreneur. It was very important to me to have this program. A lot of other companies focus on the external instead of recognizing the talent that’s right in front of them and we want to provide the means for that talent to flourish,” Wall says.

Centra is vertically integrated, from marketing to manufacturing, distribution, installation, consultation and service, as well as having in-house engineering. Its showrooms in Langley, Victoria, Nanaimo, Kelowna and now Calgary are also employee-owned.

Vertical integration means a one-stop warranty for Centra’s clients, according to Anton Van Dyk, vice-president of product development and innovation. “Some companies subcontract out the engineering, but we have a fully integrated engineering team. Almost every day it’s, ‘What’s the thing we have to solve?’” 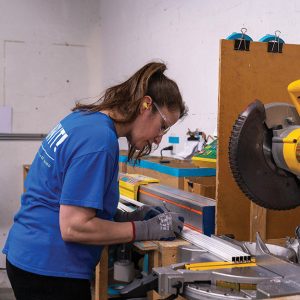 Centra believes that employee-owners, like fabricator Hiam Yonan, are the key (and not-so-secret) ingredient to the company’s success. 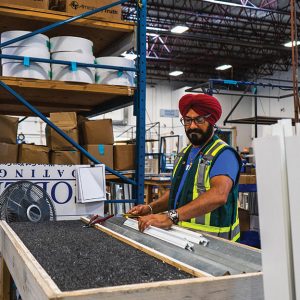 Gurprit Toor, senior lead, fabrication, is one of around 400 Centra employee-owners. 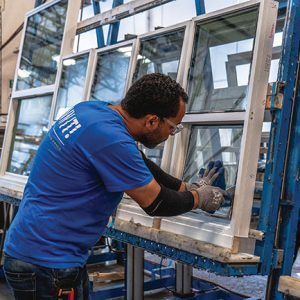 Specializing in retrofitting, as well as providing windows for new construction on a supply-only basis, Centra accepts projects ranging from family dwellings to properties such as the 26-story Imperial Tower in Vancouver. The experts at Centra are well-experienced in navigating the complexities of retrofitting larger strata buildings, with over 400 complexes under their belt.

New to my eastern lexicon, strata housing, according to the British Columbia government, “… not only includes apartment-style condominiums but can also include duplexes, townhouses, fractional vacation properties, even single family homes in bare land strata corporations (“strata subdivisions”).” They also include industrial and commercial developments, all governed under the Strata Property Act.

“Our team is full of respectful, professional employee owners who do all they can to make the process as smooth as possible for all the residents they work with, no matter how many of them there are. One of the things strata owners love most about Centra is that we install our products as well as making them. Using our own experts and avoiding subcontractors avoids a range of potential problems and finger-pointing, and it’s also how we’re able to offer our industry-leading warranty,” Centra notes.

There is that, but Van Dyk, the company code breaker, so to speak, keeps the wheels of code compliance turning. Everyone involved in building construction finds themselves staring down the barrel of the local building codes, but Van Dyk invites the code on his annual vacation. He has, he says, a “big focus on technical expertise and codes.” 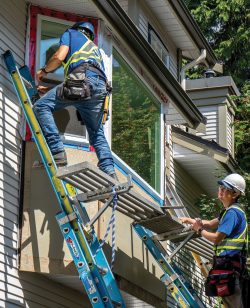 Centra Windows installers upgrading a multi-family complex to energy-efficient vinyl windows. Centra does all its retrofit installations itself to maximize quality and accountability.

“I always [re]introduce myself every year. I take a week off and re-read it. The code is written in double negatives. There is a two-letter word in the National Building Code that is rather important: it is the word ‘or.’ So, [I might] pick the ‘or’ path and building inspectors [may not] accept that. I don’t argue with them, I just ask them to provide me with the section of the code they are referring to. Before you know it, you get some clarity.

“The Imperial Tower in Vancouver and the new modular Marriott hotel are examples of projects we were able to do because of our knowledge of the code,” Van Dyk explains. “People said, ‘You can’t use vinyl windows.’ But actually, you can. It is in the code. With Imperial Tower, we were able to work with engineers to figure out how to make vinyl windows work in a 26-story building. There is a specific section of the British Columbia Building Code that allows for this.

“The challenge with building like this is that you have to meet more than just the combustibility section of the code. You need to take into account thermal performance and structural performance. Traditionally, it would be assumed that aluminum is the only product that can meet the combustibility section of the code and, because aluminum is stronger than vinyl, it generally is the preferred product. The new challenge we face in that regard is that the energy codes are making the use of aluminum products more difficult due to their higher thermal bridging properties, so now vinyl windows are becoming a more popular choice. Vinyl windows are less conductive than aluminum, but we still need to add steel reinforcement to vinyl in order to meet the window load requirements for a high-rise building. This starts to create its own challenges as the more steel you add the more conductive the window is, but also, the more steel you add the stronger it is. So, the balance is between thermal conduction and structural deflection resistance. It’s not always a simple task to design.”

Looking down the road, Van Dyk mentions the company’s drive to automate aspects of window design and testing, including, for example, developing tools that warn of code conflicts. “’Error. Cannot make,’” he mimics. “Technology combined with knowledge is the key. There is a massive amount of work going into our IT systems for automation.”

But the human touch will always be paramount, judging from the words of Wall and Van Dyk. “A company should only exist if it makes the lives of its customers, employees and communities better. Employee ownership does all three – customers receive the highest levels of service from owners, and employee owners get access to investment opportunities which spreads wealth back into their communities.” Attending to this principle helps Centra make the right decisions.