Articles Fabrication
Doing it with heart – A look at Atlantic Windows

Employee engagement, innovation and quality on display at Atlantic Windows. 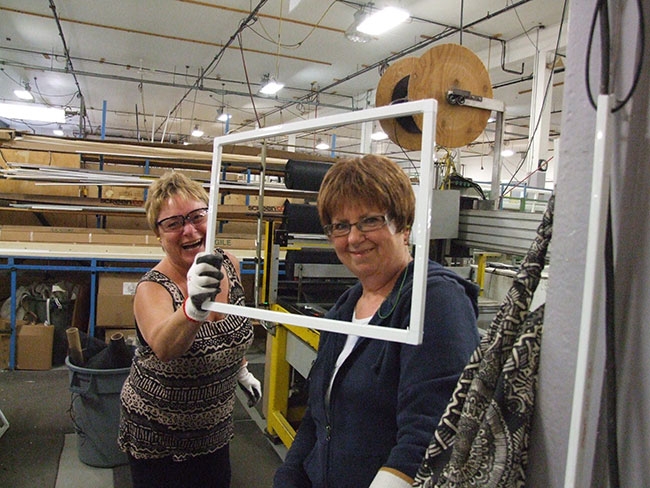 It’s one of the happiest shop floors you’ll ever walk. President Greg Dickie and the rest of the management team have people working hard and liking it by taking a genuine interest in their ideas and well-being. From left - Julia Arsenault and Sue Walton

Don’t blink, or you might miss Port Elgin, N.B., population 450. For tourists, at least, it’s usually a blip on their way elsewhere. But if you do take the turn, you’ll find a small community that’s been at the crossroads of commerce in New Brunswick for hundreds of years.

Now it’s Atlantic Windows leading the charge from Main Street and a 120,000-square-foot facility. About 200 associates are putting together an ever-growing number of solid vinyl windows here for customers throughout Atlantic Canada, Bermuda and now in Ontario, too. Twenty minutes away in Amherst, N.S., the company has another 50 associates building entrance systems in a 44,000-square-foot space.

Growth has been the overwhelming theme here since 1984, when Alain Anctil turned Port Elgin’s old community centre into Atlantic Windows. Steve Smith bought the company in 1997, and that growth has just accelerated since. Over the past 20 years, the company has tripled its sales numbers and expanded by 120,000 square feet. It can also boast a number of firsts: the first window manufacturer to offer lifetime warranties in the Maritimes, the first to install a Lisec automated glass line in Canada, and the first to offer Energy Star windows in Atlantic Canada. In 2010, it also won the Crystal Achievement Award for Most Innovative Plant in North America.

So how did Atlantic Windows become so successful so rapidly? Well, over the course of a couple of hours in Port Elgin with company president (and Fenestration Canada board member), Greg Dickie, it becomes clear the answer has a whole lot to do with how the company treats its people, its customers and new ideas.

People First
The first strange thing you’ll notice on a tour of Atlantic Windows with Dickie is that he knows the first names of most of the 200 people who work here. And it’s clear he didn’t just memorize those names before I arrive, as he exchanges jokes with many and even hugs one person.

“I used to work at General Motors in Oshawa as an engineer, where there was animosity between the staff and the people in the office. The atmosphere was strained,” he says. “At Atlantic it’s not like that. Our past president, Rob Miller, established a culture where every associate has a voice. He had an open-door policy, and I still believe in that philosophy today. The people working here are the experts, as they build our products every day. Many companies don’t realize this, they just say, ‘Do it this way.’ It’s amazing the creative ideas our people come up with.”

Exhibit A: A few years ago, the company introduced a new layout in one area to try to make manual window assembly more efficient. It wasn’t working for one associate in particular who had to walk an extra 20 feet at his station to keep the flow going. Dickie’s response: “You’re right. Why don’t we stay tonight and get that changed around?” And so they did. “For me, I like it that if I have a stupid idea, tell me that I have a stupid idea,” says Dickie. “Don’t go behind my back. I want people to feel comfortable, and that just makes things more transparent and efficient.”

That respect extends to the hours Atlantic Windows asks their team to work: Monday to Friday, 7 a.m. to 3:30 p.m. for the day shift; Monday to Thursday, 3:30 p.m. to 2 a.m. for the night shift. Good attendance is rewarded with paid time off if they don’t miss more than two hours per month.

This isn’t to say Atlantic Windows associates are always happy, of course. Which is why they have an Associate Advisory Committee of nominated peers who meet with each associate every six months and then pass along their concerns or suggestions face-to-face with the president, the director of manufacturing and the human resources manager.

One suggestion a few associates made this spring was to plant a garden in an inner courtyard where they could grow vegetables, sell them to fellow associates and then donate the proceeds to the IWK Health Centre in Halifax. In just a few months, they’ve raised close to $1,000 to go along with nearly $260,000 the company has raised for the IWK over the past nine years through golf tournaments, bake sales, 50/50 draws and more. Locally, Atlantic Windows also contributes to a range of different charities, and provides a $100 “fit credit” to every associate.

“It’s all about life-work balance here, not work-life balance,” says Dickie. “For us, it’s treating people like people, and that’s been a big reason why we’ve been so successful.”

Flow lines are a good example of something they’ve tried and had to tweak over the past 10 years. Before they were introduced, manual assembly tasks weren’t always balanced for each work station; one associate might have had three minutes of work at a time, while another might have had one minute of work. So, the team came up with a plan, and took it down to the floor to initially try with four associates.

“Some of the associates had some choice names for the new line. They were leery of our intentions to get them to work harder,” says Dickie with a laugh. “But right away we had a 40 per cent improvement, and the participants did not feel they worked any harder and actually felt better. We took the team upstairs to discuss their thoughts and work out some tweaks, and some of the naysayers became our biggest proponents. The next time we fired up the line, we had 12 people volunteering to be a part of it. So we could have taken a year to analyze, but you don’t get that buy-in until you get everybody involved. And you can solve problems a lot faster that way.”

What also helps, he says, is having an engaged owner in Steve Smith who continually invests in the business. In 2003 alone, he invested $1.6 million in a 30,000-square-foot expansion at the Port Elgin facility and $1.7 million in a Lisec automated glass line.

Dickie says the Lisec machine is “the heart that really pumps the blood through here.” Powered by two state-of-the art robots – one that places the spacer on the glass and another that puts a secondary seal all the way around the glass – it drastically increased their efficiency, offsetting 13 people per shift. “But nobody lost their job; we placed those associates in other areas,” Dickie is quick to add. “No one has ever lost their job here over automation or Lean manufacturing, and we’re proud of that. And that just helps people realize that if we don’t do things like this, we’re going to get left behind.”

Committing to Quality
What’s also prevented Atlantic Windows from getting left behind is backing up their commitment to producing the very best products they can. “Commitment to quality – that’s always kind of a cliche, but for us we back it up with the lifetime warranties we have on most of our products,” says Dickie. “If you’re offering a lifetime warranty, including parts and labour, and servicing your warranty like we are, then you better back it up with good quality or you’ll be out of business.”

You’ll also be out of business if you’re not listening to your customers and paying attention to new trends or shifts in the market, he adds. Which is why, after talking to contractors and other customers like Kent Building Supplies (their largest customer), they’ve been expanding paint operations here and in Amherst and making them more efficient. The new gas-driven paint booths they now use mean that a painted window will dry within two hours, as opposed to the previous four days.

Similarly, in response to a stagnating new construction market in the Maritimes a few years ago – and experiencing flatlining sales themselves – Atlantic Windows began targeting the renovation market. Their most significant move was to redesign a few of their windows so that it was much easier for contractors to replace old wood windows. Soon sales were trending upwards, and last year was the company’s best sales year ever.

Dickie is banking on that growth to continue as they dip their toe in Ontario, where the window and door renovation market alone is three times the entire window and door market in Atlantic Canada. This summer, they began an alliance with one of Canada’s largest window manufacturers, and through that partnership recently landed a contract with Mattamy Homes, North America’s largest privately-owned home builder.