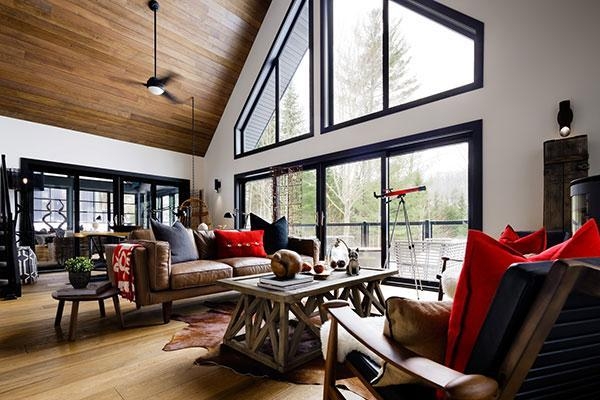 April 30, 2015 – Scottish power couple Colin & Justin have quite the following as successful designers, celebrity elitists and social media gurus. They have recently left the city life behind and overhauled a ‘slanty shanty’ into a modern cottage on their Cottage Life show ‘Cabin Pressure’ – season two.

Located in the heart of Haliburton Highlands on Drag Lake, these two gentlemen took it upon themselves to design and build the project utilizing local trades and materials. As most of us know in the industry, cottage building poses all sorts of unique challenges including site access and dependable trades through to timelines around hunting season. This didn’t dissuade them, as they’ve built in the Muskoka’s before and knew the drill. We were skeptical though and we weren’t the only ones!  In contrary to our assumptions and in an inconceivable manner, the layers and layers of trades and suppliers that were involved with the project worked almost seamlessly with one another.  Typically, a jobsite is not the most approachable place, as trades often compete for time and budget.  Not this build.  There was an open understanding of what was needed to succeed and every participant in the project did their very best to create harmony on the jobsite.  That’s right – harmony on the jobsite.  Big machines, muddy landscape, tight spaces and sometimes very bad smells didn’t hinder the positive vibe that was created.  Colin and Justin were restless leads on site.  Even while traveling from Toronto or sometimes Glasgow and living from hotels with only items packed in their truck, they still put everyone at ease and inspired premium workmanship.  And of course, as always, they made it fun and stylish too.

The pace and the final outcome of this project has been impressive. Colin and Justin’s project has since become a catalyst for our latest growing market segment; black windows and doors. Their vision was inspired by Chris Meiorin’s BlackBirch Cottage (on Drag Lake) for the use black frame glazing to modernize the overall esthetic. This included floor to ceiling bedroom tilt-turn windows with an offset sash design, bi-parting sliding doors, and pitch perfect trapezoid windows. The black lines frame their lake view perfectly in with their Canadiana interior décor.

Check out the ‘Façade Applaud’ episode of Cabin Pressure on Cottage Life Network. Our favourite scene would have to be when they are marveling over the look and feel of the frames. That’s what we do in the shop here at EVW – we didn’t foresee these guys swooning like that too! It was the highest compliment. We hope you enjoy the show too.