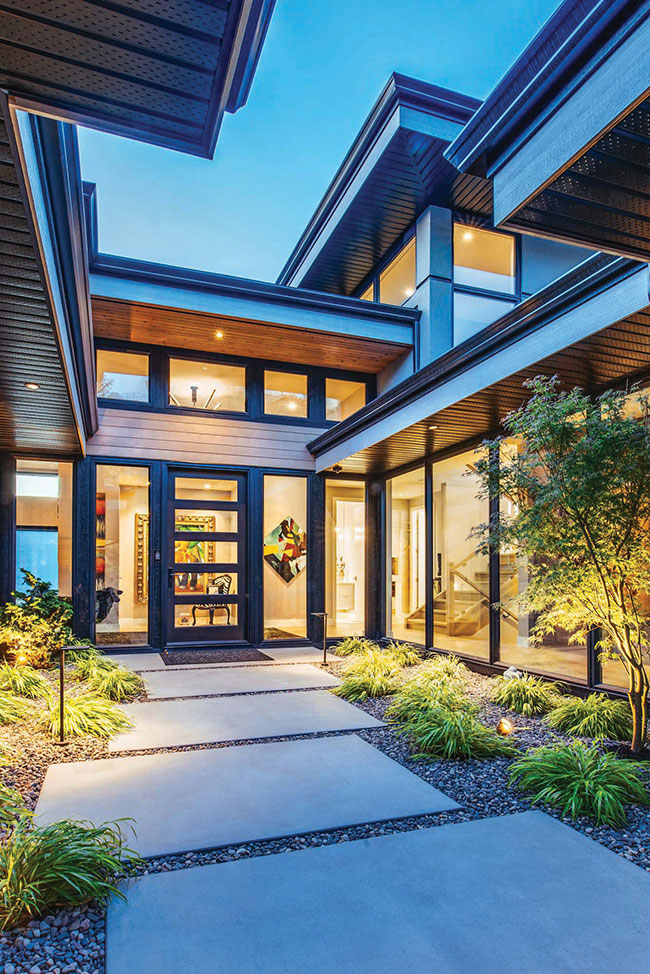 Westeck strives to not only meet the stringent energy efficiency standards of the Vancouver region but goes beyond to offer Passive House-certified quality products that are setting the stage for the future of eco-friendly housing.

Westeck Windows and Doors has been at the forefront of the industry in terms of innovation and product firsts, delivering energy efficient options for custom home builds in western Canada and the northwestern United States.

The company has grown from a small start-up into an industry leader thanks to an ever-better mindset and ambition to stand as an example to others in the industry.

The Westeck team consists of over 250 employees with 30 project consultants across three manufacturing facilities located in Chilliwack, B.C. The company also boasts seven showrooms throughout British Columbia and Washington state. While its main focus is on production, Westeck also works with clients to arrange for the installation of its products via subcontractors that are familiar with the specific installation needs of Weteck’s unique products.

Will Tait, general manager for Westeck, has been with the company since January 2021 after 30 years in the industry in both western Canada and the U.K. He began in accounts and finance and has been in management positions for over 20 years, with the past seven years in the role of general manager. “Looking at Westeck, they were one of those names, one of those companies, one of those competitors that were out there in western Canada that you look towards,” says Tait. “So, when the opportunity came for me to take this role, I basically jumped at the chance.”

Future Efficiency Today
The recent heat dome that seared the west coast of North America brought many conversations around environmental impact to the forefront. As a result, a large portion of the industry that is involved in building development is looking for ways to offer solutions that have a positive impact on energy efficiency and contribute towards the mitigation of climate change.

Westeck’s primary customer focus is currently centred on high-end single-family homes in western Canada, predominantly in British Columbia, with a large portion of sales coming specifically from the Vancouver market. As Vancouver, and B.C. as a whole, has some of the highest standards for energy efficiency and sustainability in the world, Westeck has spent a great deal of time and effort bringing its products in line with those standards and has even gone so far as to exceed them by offering Passive House-certified products.

Passive House is a voluntary standard that seeks to create ultra-low-energy-use buildings by reducing the amount of energy needed to heat or cool the spaces within. This is often achieved by ensuring air tightness and proper insulation. A key factor in this endeavour is the quality and high performance of the windows used. That’s where Westeck comes in.

Westeck offers a Passive House lift-and-slide door as well as a North American-style wood outswing casement window. The company also pushes for high efficiency standards across its product lineup to get the best U-values possible and provide its customers with future-facing, energy-reducing products. As Tait puts it; “We want to keep it functional and good looking, but at the same time, it has to be able to hit or exceed the current code that the city of Vancouver, if nowhere else, will be continuously pushing forward.”

Westeck achieves the high level of efficiency in its products by using triple-glazed argon- and krypton-filled units with multiple coats of low-E to allow for a thinner, smaller frame that helps reduce weight and increase efficiency. Furthermore, Westeck does its own inhouse testing for performance, research and development and quality control purposes before any products are sent out to the accredited test lab facilities for validation of compliance and certification. This allows the company to redesign its products as many times as needed to achieve the maximum efficiency ratings, structural stability and compliance certifications.

Custom high-density fiberglass mullion reinforcement can exhibit roughly 200 times less conductivity while maintaining its structural integrity due to its geometric design. Westeck has gone to lengths to mitigate it’s use of traditional metallic reinforcements, which inherently decrease the overall thermal performance of products due to their extremely high material conductivity. 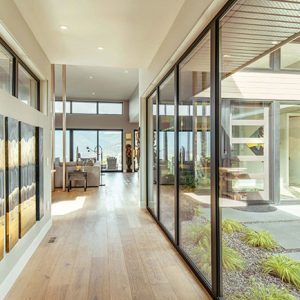 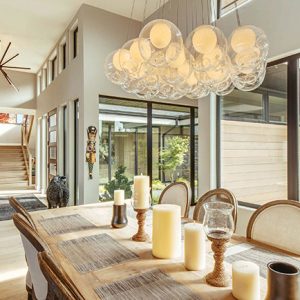 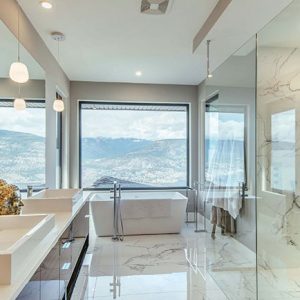 Big views, even in the bathroom. The latest trends guide Westeck’s R&D.

Forward, Always
As housing trends begin to shift away from single-family homes towards more communal, multi-family buildings, such as condos and townhomes, Westeck is keen to move into those markets through its foothold in the renovation market. Another factor driving trends in the market that cannot be overlooked is the impact that COVID-19 has had on purchasing and home-buying trends. People are in their homes more and spending more money, time and effort towards making those homes comfortable, affordable and sustainable. Windows and doors are often high on the replacement list as older units are far less energy efficient than modern options.

Tait foresees this continual push for higher energy efficiency and environmental standards will make it more difficult for many in the industry and will result in some consolidation. Those that will be able to meet the rising standards will serve as an example in the industry, and Westeck aims to be that example.

Westeck is now benefiting greatly from the foresight of its previous management, which set the company on its current path of producing windows and doors to the highest standards of energy efficiency – standards that are rapidly moving from voluntary measures to compulsory qualities.

Maintaining Momentum
When product innovations become the daily norm, it seems reasonable that a company could let their foot off the gas and enjoy their moment in the spotlight. Not Westeck. The company maintains its momentum through a company culture and ambitious team mindset that have been cultivated by members of senior management over the past 20 years. “We want to be the best in the industry,” says Tait. “We want to be the company that other window fabricators look up to. But maybe not even just in the window industry.” Indeed, Westeck has set itself out as the company to emulate when it comes to innovation, especially with regard to energy efficiency and environmental impact.

But how does a company plan for the future in such an uncertain present? According to Tait; “We have to constantly be looking at what the long-term expectations are and what we can do to build and improve on that.” And those improvements come into play at all levels of the company, not just product innovation.

Westeck’s new system was a year and a half in development and, like so many large changes recently, the switch came during the height of the pandemic. “Now that it’s there and it’s ready and we continuously improve on it, how do we go beyond that? How do we make more improvements?” The technical team as well as the sales team are always on the lookout for those improvements, wherever they can be found. This tireless drive towards excellence is what keeps the company churning out new products that don’t merely push current standards but, in many cases, blow right past them.