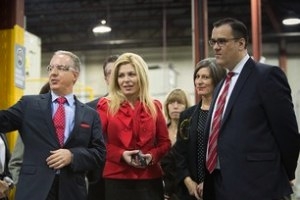 Nov. 27, 2014 – Industry Minister James Moore has announced $9 million to support manufacturers in southern Ontario. This investment will help manufacturers do what they do best – innovate, grow, create jobs and compete globally.

Nov. 27, 2014 – Industry Minister James Moore has announced $9 million to support manufacturers in southern Ontario. This investment will help manufacturers do what they do best – innovate, grow, create jobs and compete globally.

The Harper Government is providing funding to the Yves Landry Foundation (YLF) to continue delivering its Achieving Innovation and Manufacturing Excellence (AIME) Global initiative. The renewed initiative, which will launch December 1, 2014, will help export-oriented manufacturers provide employee training to support the adaptation of new technology, new processes or procedures that increase productivity and competitiveness.

This will increase the skills and experience of the southern Ontario workforce, while increasing manufacturing export sales and strengthening the region’s export supply chains.

• Manufacturing is an economic driver for Canada, employing 1.7 million Canadians. This investment will create up to 1,100 new manufacturing jobs, maintain more than 1,000 and provide training for more than 6,900 workers. This project is also expected to leverage up to $16 million from southern Ontario manufacturers.
• Since 2009, the Government of Canada has invested more than $18 million in YLF to deliver skills training in southern Ontario, which has advanced the skills of more than 9,500 workers with 451 manufacturing companies.
• The Harper Government is investing in innovation in manufacturing through initiatives such as the Advanced Manufacturing Fund, Technology Demonstration Program, the Strategic Aerospace and Defence Initiative, and the Automotive Innovation Fund.
• Canada’s manufacturing sales have bounced back and are up more than 25 percent since the recession.
• A key part of supporting manufacturers is ensuring that companies have global markets for the goods they produce. Through its Global Markets Action Plan, the Harper Government concluded seven different free trade pacts with 38 countries. It has also concluded or implemented foreign investment promotion and protection agreements with 22 countries and continues to deepen trade ties with the largest, most dynamic markets in the world.
• Canada’s two most recent trade agreements, the Canada–European Union Comprehensive Economic and Trade Agreement (CETA) and the Canada–Korea Free Trade Agreement, promise to add at least $14 billion annually in new economic activity, equivalent to creating more than 90,000 new jobs.
• Since 2006, Canada has gone from having free trade agreements with only five countries to now having free trade agreements in force, or being finalized, with 43 countries around the world.
• Both the International Monetary Fund (IMF) and the Organisation for Economic Co-operation and Development (OECD) expect Canada to be among the strongest growing economies in the G7 over this year and next.
• In 2013, Canada leapt from sixth to second place in Bloomberg’s ranking of the most attractive destinations for business.
• According to KPMG, total business tax costs in Canada are the lowest in the G7.