Articles Community Events & Shows
FenCon17 – A spark in the West 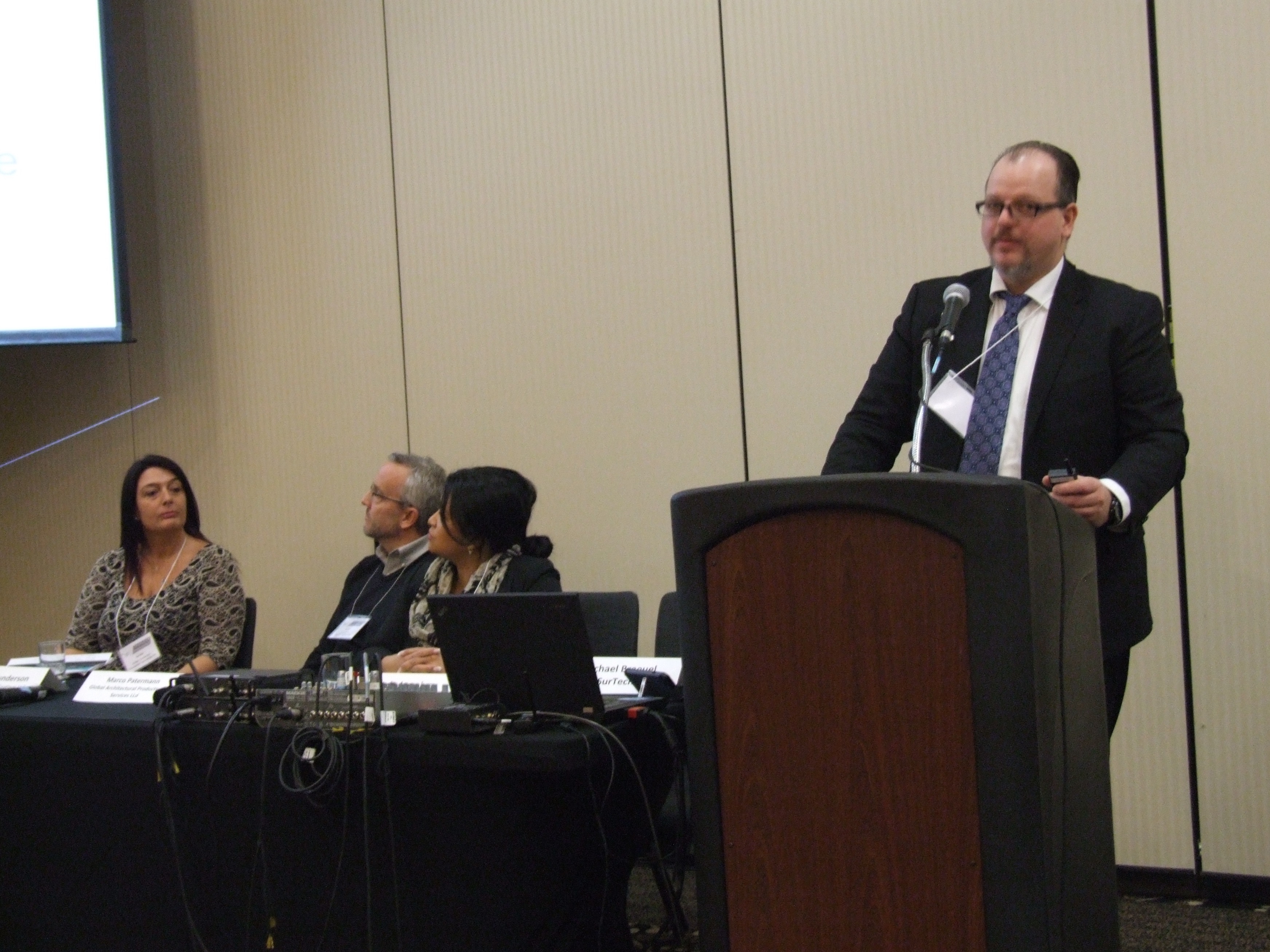 Feb. 13, 2017 – Al Dueck is clearly a man who is willing to work his posterior off for the good of his business community. As chairman of FenCon17 – the fenestration industry conference he imagined, sold, organized and hosted on Feb. 10 with the help of his friends at Fenestration Manitoba – Dueck created a day packed wall-to-wall with fresh, exclusive education and networking opportunities aimed squarely at window and door manufacturers. One wonders just how many phone calls he made to attract the all-star presenters and the healthy crowd of over 140 attendees, but it seems safe to assume that everyone in the room was contacted more than once. Thanks to the organizing talents of Nancy Zubriski, Fenestration Manitoba executive director, the result was a polished event that remained friendly and accessible. It isn’t hard to imagine FenCon becoming an important recurring forum drawing visitors from all over the country.

Dan McInnis of Sustainable Building Manitoba ably MCed the opening proceedings. McInnis was formerly assistant deputy minister for climate change and environmental protection in the Manitoba provincial government. FenCon17 was kicked off with a touch of official gravitas by a welcome from Cliff Cullen, Manitoba’s minister of growth, enterprise and trade. Cullen spoke about the new government’s plans to reduce taxes, eliminate interprovincial barriers to trade and make access to venture capital easier in the province. Ryan Dudeck of Paramount Windows and Fenestration Manitoba president then rose to welcome everyone and comment on the significance of the event, saying it was the culmination of the board’s determination that their association should do more than just organize golf tournaments. He pointed to their ability as an association to influence provincial codes and national standards, saying the organization has allowed even competitors like himself and Dueck to work together for mutual benefit.

Following the opening remarks, McInnis moderated a panel discussing innovation in the window and door industry. Participating were Matt Batcha of Fenetech, Ian Marshall of Canadian Manufacturers and Exporters and Stephan Segal of Polar Windows. Batcha noted how information technology continues to change the manufacturing world at a breakneck pace. As an example he pointed to quoting software, which was relatively rare 10 years ago but now is practically a necessity for most window and door makers. Looking to the future, he predicted fenestration companies will need to be ready to combat digital security threats such as ransomware, increase automation to address labour shortages and make products that can be integrated into the internet of things. Marshall spoke about the need to use continuous improvement methods to harness the potential of the people already in the fabrication business. Finding a person who is good at something and leaving them in the same role for decades is a wasted opportunity for innovation and improvement, he argued. Manufacturers should be using their staff’s expertise to push past the old ways of doing things. Segal made a strong call for the industry to not allow itself to become complacent in its established ways of doing things. He noted that the Canadian window and door industry used to be recognized as a world leader in innovation and quality, breaking new ground in such areas as triple-paned units and PVC frame construction. He said it the past our innovation in product and processes might have ranked an eight or nine out of 10, but now has slipped to four, five or even less. That way lies a race to the bottom on price, Segal warned, and, he said “I didn’t buy into this business to compete on price.” He blamed a conservative, defensive mindset that resists collaboration and focuses on preserving existing business to exploring new territory. McInnis and the panel mused about the potential in stimulating demand for new products that homeowners don’t even know they want and in possible new business models that provide fenestration through creative financing arrangements.

As the breakout sessions began, the challenge was certainly to choose which one to attend. Three education streams were offered, meaning there were three sessions happening at any given time.

A session titled “Window finishes from the present to the future” was presented by David Harris of Renolit, Maria Jasminez of AquaSurTech, Marco Patermann of Global Architectural Products and Services and Amber Gunderson of Chameleon Top Coatings – all at the same time! One of the remarkable accomplishments of Dueck and his team was to get competitor suppliers to occupy the same podium and deliver educational presentations together without any loss of life. The result was a feeling that the material must be reasonably well-grounded in fact, since each presenter had their competitor there to keep them honest. This was borne out in the finishes discussion, which certainly provided both sides of the solvent-versus-water-based debate. Bottom line: water-based finishes have drawn even with solvents in terms of regulatory compliance and available colours with advantages in terms of worker safety and VOC standards. Solvents may retain some edge on durability.

The competitor-on-competitor fun didn’t end there, with Serge Rondeau of 360 Innovations, Matt Batcha of Fenetech and Brant Olson of WTS Paradigm teaming up to discuss ERP software implementation and how to avoid its pitfalls. The presentation was extremely useful to anyone hoping to avoid some of the costly overruns that can occur with a botched implementation. The main message came down to preparation prior to starting the implementation process; the goals and scope of the ERP project must be clearly defined and kept as simple as possible, the data to be input should already exist and people who understand the company’s processes should be dedicated to the project. Unexpected snags that delay implementation for long periods are one of the main causes of cost overruns as changes that occur while nothing is happening can force a step back to earlier stages in the implementation process.

Denis Perron of Adfast and Paul Breault of Precision Motion and Control discussed automated window and door manufacturing with an interested audience. Perron described Adfast’s almost totally automated process for making and packaging silicone sealant and told how the approach has helped almost every aspect of the business from quality and production volume through data collection to supply chain and sales management. Breault talked about PMC’s process to develop the automated manufacturing cell it displayed at WinDoor and emphasized the correct approach to automating for the first time: start small and build up. He answered questions about the capabilities of robots to deal with the fluid circumstances in a window fabrication process, saying just about any condition is simply a problem that can be solved with proper implementation of the system. He urged manufacturers to avoid “poisoning the well” by introducing automation without proper consultation and support – if a project goes wrong, it is unlikely a company will try again for a long time.

Matt Holladay, editor of the Green Building Advisor blog, and Harry Schroeder of Manitoba Hydro presented a look at energy efficiency. Schroeder had some interesting statistics showing that homeowners rarely think about windows as a priority when buying a new house, but tend to rate them as a highly desirable renovation after owning for a few years. The market has shifted, he said, from viewing windows as an investment to seeing them as a contributor to lifestyle and quality. He showed that discrepencies between ambient air temperature and the temperature of surfaces (like windows) is one of the biggest drivers of discomfort in rooms. Condensation is the biggest source of complaints about windows, and one of the hardest to solve, yet ratings agencies say little about it. Schroeder showed that triple units can reduce condensation even when they are not critical for energy efficiency. Return on investment in energy efficient windows continues to be weak (three to six per cent) because of low energy costs – Schroeder suggests a need for higher end windows to be sold on comfort and style rather than ROI. Holladay addressed a number of topics in his talk. He spoke about his journey from being an advocate of the superinsulated efficient building concepts of the ’80s to a position where he is not entirely sure that is the best approach. He talked about the diferences between how North American and European standards measure U-value and how they generate different standards for IG cavity width. Holladay showed that depth of frame can be as important as the solar heat gain coefficient of the glass for determining how much the sun actually heats the interior. There is no single solution for the best about of solar heat gain, he said – it depends on multiple factors such as house orientation and shading. Holladay pointed to one study that determined that with energy prices as low as they are now, the windows’ contribution to the home’s overall energy performance was so low as to make esthetics the more important consideration.

The event venue was convenient and well-served and the attendees positive and appreciative. A great start for what could be a great tradition in the heart of Canada’s western window and door manufacturing hub.


Related
FenCon17 Winnipeg: A spark in the West
Support pouring in for FenCon17
FenCon17 blog offering a wealth of information
FenCon17 update