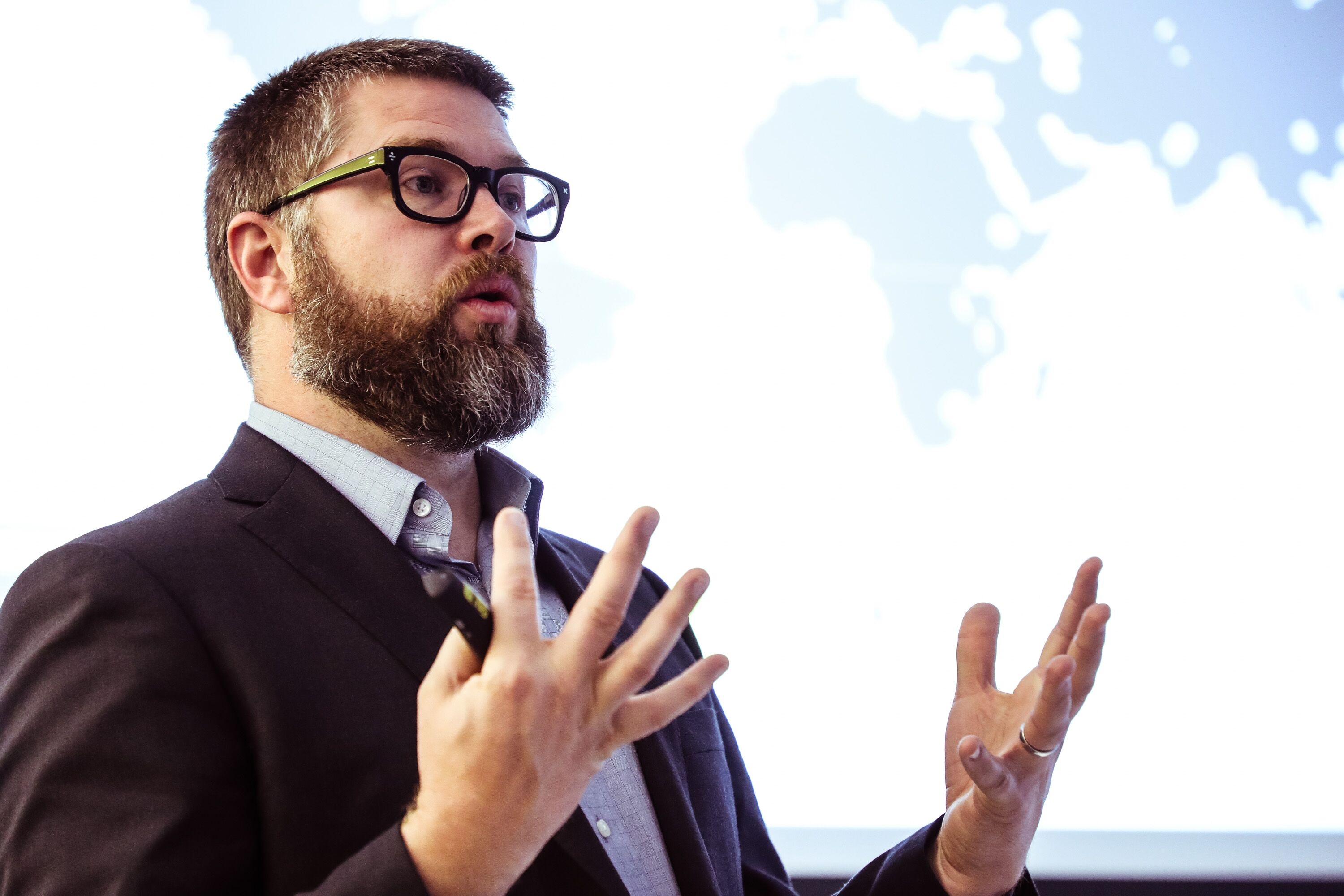 Winnipeg is blessed with a rich pool of design talents. This creativity is annually displayed and publicly engaged by the Winnipeg Design Festival, under the auspices of Storefront MB.  The 2019 event was spearheaded by Jae-Sung Chon,a member of the University of Manitoba’s faculty of architecture and the director of STUFF (Studio for Transformative Urban Forms and Fields).  Ben Waldman of the Winnipeg Free Press noted that “Winnipeg Design Festival turns city into a ‘living laboratory’ for cutting-edge creativity.”

With this spirit in mind, the festival hosted a talk on design and change in the built environment. Chris Higgins – a green building planner with the City of Vancouver – was the keynote speaker at the talk hosted at Stantec on September 26th.  Duxton Windows sponsored Higgins’ trip to Manitoba.

In a creative and engaging presentation, Higgins discussed British Columbia’s Step Code, a building policy that aims to transition B.C. municipalities to a point where they produce as much clean energy as they consume.   Higgins’ presentation to a group of about 50 architects, policy makers, educators and architectural students laid out a fascinating range of elements that has allowed BC to become recognized internationally. Vancouver has announced its goal of becoming the greenest city in the world!

Lisa Landrum, Associate Professor & Associate Dean Research, Faculty of Architecture, University of Manitoba, chaired the afternoon’s event including responses from the local design community: Crystal Bornais, the Manitoba and Saskatchewan Regional Director for the Canada Green Building Council (CaGBC); Melissa McAlister, a principal at Prairie Architects, one of Canada’s distinguished leaders in sustainable design; and Jordan Lanoway, a Sustainable Engineer at Stantec.  Notably, it is clear that Manitoba possesses a great depth of environmental design knowledge and skills. Examples include the greenest school in Canada in 2017 and the internationally recognized Manitoba Hydro head office in downtown Winnipeg.

As Landrum noted in her opening words, “This week Swedish activist Greta Thunberg delivered an impassioned speech to the United Nations Climate Action Summit – telling leaders that ‘the world is waking up, and change is coming…. [and] we’ll be watching you.’ Similarly, architecture students, young people and citizens are watchingus– teachers, professionals and industry leaders – to set a strong example on climate justice through design teaching, design, advocacy and policy change.”

Higgins has been deeply involved in the development and broader implementation of the BC Step Code system for a number of years.  It was his presentation at a FenBC event that inspired his invitation to Winnipeg.  Higgins generously offered to spend several days, make several presentations and meet with a varied group of policy makers with the city of Winnipeg and the province of Manitoba.  Consequently, the #PROTO talk was preceded by a meeting with a small team of City of Winnipeg Sustainable staff in combination with Crystal Bournais, Executive Director, CaGBc Manitoba. “It proved to be a very good meeting,” noted Higgins, “They asked a lot of the right questions and we were able to offer some important insights.”

Fenestration Manitoba hosted a breakfast event on Friday, September 27 at the Norwood Hotel. The breakfast was chaired by Dan McInnis, former Executive Director of Sustainable Buildings Manitoba. He is also a former provincial deputy minister. The meeting was attended by a mixed group of just under 40 people.  A slightly modified presentation titled Lessons from the BC Energy Step Code discussed the development of the Step Code. Higgins then highlighted some of the positive on-going developments from this implementation.

Higgins noted that “Our city and region is quickly becoming the go-to place for green business. With all these green businesses come green jobs. Today, one in 15 Vancouverites works in the green economy. These are jobs that focus on preserving our environment, cutting energy, water and materials use, cutting carbon from our economy, and reducing or eliminating waste and pollution.

“There is a projected global market of $350 billion for green building products, and our green building work sets us up well to take a global lead in the clean economy of the future. Policies like our Zero Emissions Building Plan and BC’s Energy Step Code have jumpstarted a $3.3 billion opportunity for local manufacturers, installers, and suppliers of green building materials.”

Higgins noted that the much smaller city of Whitehorse has been a real inspiration to Vancouver. “We looked to Whitehorse for their advanced building code, despite being a very different city we learned a lot.  Please consider that while actions I am talking about this afternoon may not be directly applicable to Winnipeg, there are solutions that can be implemented that are made in Winnipeg to solve made in Winnipeg challenges.”

Higgins made some key points during his time here. 1) In a time where clean and green means switching off fossil fuels and onto clean energy, Manitoba has an abundance of hydro-electric power; 2) Manitoba has a key advantage in that the “supplying utility” (Manitoba Hydro) controls both hydro and gas and 3) an offer to provide insights and “lessons learned” to the Manitoba policy makers to accelerate their ability to implement!

Donald Proven, Sun Certified Builders, “Through the Passive House courses I attended at BCIT, it was made clear that the Step Code just “was”. It was the reality for builders in the city. Hearing Chris describe some of the process of how they got there gave me some hope. That was my main take away. The idea that you have to have a target to make meaningful change is another key point, hammered home every time we start a design with people – we need an energy target before we draw so we know where we are going to.” I consider myself to have been fortunate to have sponsored Higgin’s trip to Winnipeg. I hope his visit will precipitate new action in Manitoba.  The current provincial administration has a stated objective of Manitoba being“the cleanest, greenest and most climate-resistant province in Canada”!

BC and its Step Code has created a clear pathway for success. Manitoba has an abundance of clean hydro power available. Itdoes make sense that our world should be working on “living a lot more lightly” on this planet and common sense should be implemented.  It’s time to NOT plan and act on the basis of “2 year payback” on important issues. We should consider issues in the context of “7 generations forward.”