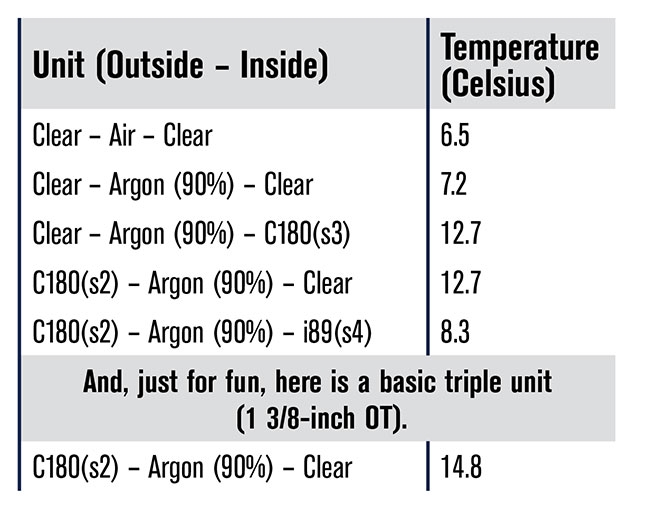 All units 7/8-inch OT and three-millimeter glass. Outside air -18C and inside air +21C.

Giving credit where it is due, in February of 2014 Jim Plevecsky wrote a blog on fourth surface low-E use as it was just emerging in the goliath south of the Canadian border. Everything he said was accurate, so, with some simplifications and embellishments, here is my update.

Why did this become an issue? Simply put, as the U.S. version of Energy Star raised its standards, numerous American companies had a problem meeting it. The reason being, their windows were never designed to accommodate triple glazing. Any window with a maximum overall glazing thickness less than three-quarters of an inch can’t accommodate the air space required. (I only say less because the U.S. companies generally have used two-millimeter glass, not three-millimeter glass. You could get a pair of quarter-inch air spaces on that basis.)

So, some bright-eyed individual came up with the idea of a second low-E on the interior surface of a dual-pane sealed unit. Problem solved! The U-values of the windows now qualified for Energy Star. There was peace in the world and all the companies with half-inch OT glass could sleep at night again.

Why should the Canadian industry care about this solution designed for the warmer climes of the southern half of the U.S.A.? Of course, these units cost less than a triple unit and don’t have the weight limitations, making them very attractive in our price-conscious industry. But, as Jim pointed out, there are other considerations in a cold climate.

I remember the ‘80s where, as the temperature outside began to tank, the industry braced itself for the inevitable angry phone calls as homeowners began to experience condensation on their brand-new windows. Of course, these windows had sealed units without any low-E coatings at all. The issue was the surface temperature on the fourth surface. Of course, why would anyone consider a clear sealed unit when we’re talking about making units with not one, but two surfaces with a low-E coating?

I’m not the best person to use the LBL simulation program, but I think I can do the centre-of-glass surface temperature (see the chart above).

See what I see? The fourth-surface low-E sends condensation resistance back to the last century! I can’t imagine that the sales people promoting this are giving a proper disclaimer to potential buyers beyond touting the great U-value. To me, fourth-surface low-E is not a valid alternative to triple in a cold climate like Canada (parts of B.C. excepted, of course).

What do those glass manufacturers have to say about this? A couple of years ago I recall being assured it was not an issue. Lately, I hear rumours that this is one of two issues that have started to come back from the field. Two issues? Yes. One of my many mantras is, “I’ve never seen an exposed coating that an innovative and creative homeowner couldn’t damage.” From what I’m starting to hear, this one is no exception to that rule of thumb. (Don’t get me started on damage to self-cleaning coatings when they were first introduced. Maybe a future article on homeowner expectation and reality in regard to self-cleaning coatings?).

Phil Lewin is sales and marketing manager for GEM windows. He’s been annoying people in the window industry since 1984.
Print this page