Home designs should include an impressive entrance right from the start. 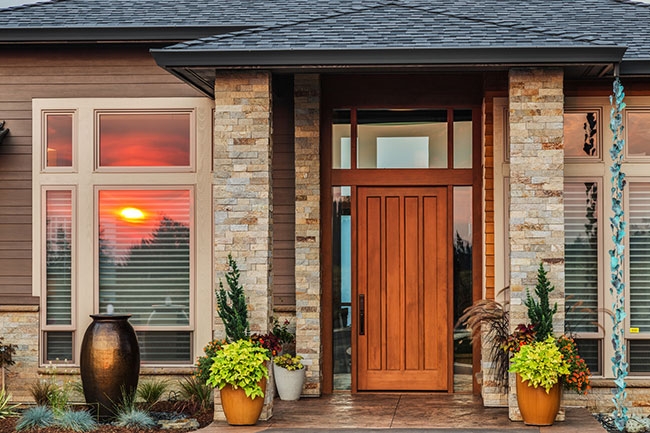 The days when houses were designed around the front entry are gone, but could return. Photo: Fotolia by Adobe Stock

When did an entry door go from being the focal point of the house to being just another opening to fill?  Houses used to be designed around the front entry so that when you drove down the street your house would have that “wow” factor because of the front entry.

Now homeowners would rather have a larger closet or garage than a grand entry. Usually the front door design gets lost in the infinite decisions that homeowners must make when building a house, not to mention the budget. Fenestration products seem to always take a backseat to the likes of stone countertops, cabinets, flooring and lighting.

As codes have changed and heightened over the past 10 years, so much stress has been put on door pre-hangers. We have to make sure products pass all the test requirements, so we can sell a properly labelled door. What has been completely forgotten is the actual design of the door frame when it comes to adding aftermarket products like storm doors and roll screens.  Homeowners think it is as easy as buying a storm door and then hanging it, but quickly realize there is nowhere to attach the door. Did the builder or pre-hanger tell the homeowner this as they were building the house?

Now fast-forward three or five years after the house is build and the homeowner hates their front door.  They hate the design, functionality and, most likely, the security of it. So they call in a professional for some advice on what they can do with their less-than-grand front entry. The professional sits the homeowner down and asks them what they want to see in a front door. Out comes the homeowner’s tablet with some pictures they found on the internet of beautiful front entries and quickly they are informed that either they have chosen a door that exceeds their budget or there is no possible way that an eight-foot door fits into their existing opening. Usually the first words out of the homeowner’s mouth is, “Why did the builder pick this door for us?” Now it is time to start telling the homeowner about options and what can be done and what cannot be done with their new door. First it is design – do they want a door with a side lite (if there is room) or two side lites? Maybe they had two side lites and now they want one or they had a double door and want a door with two side lites. Next you must talk about panel types: steel or fiberglass and, if they want fiberglass, is it smooth or textured? Now you need to talk about the dreaded word “colour” and if they want to paint or stain it themselves. Most homeowners want a plug-and-play system where everything is done and finished and when the cheque is handed over. After the dreaded colour conversation comes door lite glass and what design and size they want. Giving the homeowner more than 40 or 50 designs is a recipe for disaster. Finally, we need to bring up the conversation of hardware. We all know that is another easy decision, but you can also throw in the possibility the homeowner wants multipoint hardware to make that entry extremely secure.

In a matter of minutes, the homeowner has been given millions of different possibilities for their new grand front entry. Then comes the bad news that their new front door will cost them between $3,000 and $10,000 installed. Why did this happen and who is to blame? Is it the pre-hanger? We can be so concerned with meeting the codes that the end user is not thought of. On top of that, manufacturers can be so concerned to maintain the builder’s business that we keep thinning the product to keep costs under control. Is it the homebuilder? They are trying to build as much house as they can with the budget they have been given. No matter who is to blame, it is the homeowner who is not happy with their less-than-grand entry system and the homeowner who chooses to put out the funds to truly get something grand.


Related
Entrances: Your door is a system
Entrances: Door product showcase
Entrances: I saw this door on Pinterest…
Doorknocking: Sometimes “No” is the right answer to customer demands