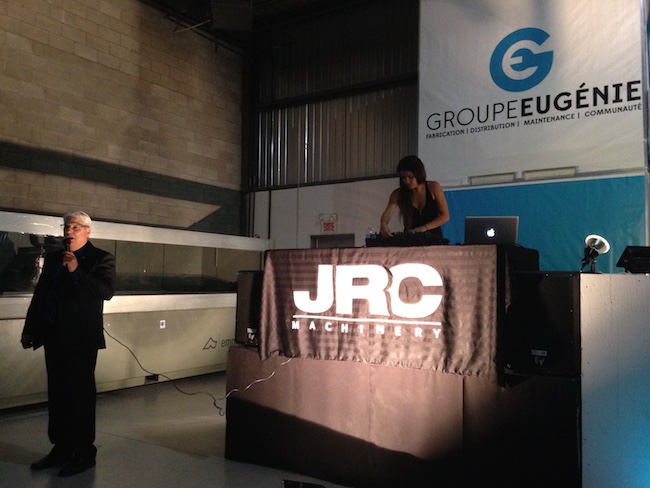 July 22, 2015 – Local businesses sometimes grow to the point where they move out of the town that saw them burgeon – an idea that will forever be out of the question as long as Richard Chauvette, Groupe Eugénie’s founder, holds the company’s reins.

This said, he figures that the Terrebonne, Quebec-based operation’s fifth anniversary was perfect timing to undergo a major makeover, embodied by the unveiling of its brand-new showroom on July 17.

“This town is and has always been my home”, said the 51 year-old CEO and native of Terrebonne, where he has always worked and chose to raise his family, including oldest son Jonathan, who works for his father and is expected to eventually take over.

“But retirement still isn’t in the plans”, quipped Chauvette, a dynamically-speaking grey haired man whose demeanor matches his passion for running and developing his business, located in the heart of the Montreal suburb’s industrial park.

Specializing in making doors and windows and named after Chauvette’s mother, Groupe Eugénie integrates all parts of the manufacturing process within its organisation – Eugénie Technologie (design), Eugénie Canada (production), JRC Machinery (sales), Techno-Pro Equipment (maintenance and technical support) and Libra Intégration (software). Techno-Pro is the group’s only company operating outside Terrebonne, with offices located in Warwick, a small town on Quebec’s south shore half-way between Montreal and Quebec City. The remaining four are within a stone’s throw from each other.

The party’s atmosphere felt less suburban industrial showroom and more like a trendy city lounge, with a DJ dutifully spinning electro-jazzy tunes while approximately 162 guests sipped wine and fed upon the gargantuan food buffet ordered for the occasion, standing amidst the four machines on display in the 12 000 square-feet room under a dimmed blue neon lighting. A glass of bubbly and a photo booth featuring the group’s company logos greeted attendees in the office lobby.

The unfortunate timing with the beginning of Quebec’s 10-day statutory holiday might have meant a smaller attendance, but a 12 000 square-feet floor would make most private party crowds look not as big as they are.

“Our five American distributors are present. We need to make them feel even more confident about our products and the company. In time, I hope we can have around 12 distributors in the US, eventually”, said Chauvette.

Among those present were Terrebonne’s mayoral delegate, councillor Claire Messier, and the federal Member of Parliament for the riding of Terrebonne-Blainville, Charmaine Borg.

“Companies like Groupe Eugénie are the economical lung of this town. We support and welcome their growth”, said Ms. Messier.

To which Jonathan Chauvetter later added, “the dream is just starting”.