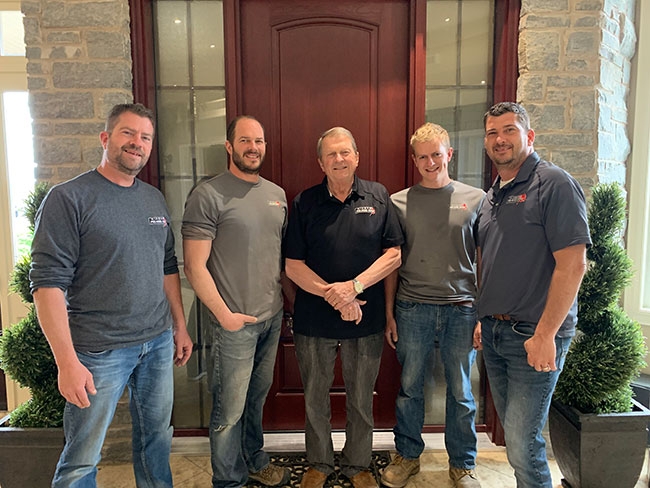 Nestled in the small town of Pelham, Ont., is the community of Fonthill, a bedroom community for the Niagara area better known for its fruit orchards than its industry.

But standing proudly on Kottmeier Road sits the story of a successful family business that has withstood the hard times that come with being in business for half a century, and continues to do well carving out a niche for itself with contractors and residents throughout the Niagara Region.

This year, Niagara Pre-Hung Doors celebrates its 50th year in business. Of course, this third-generation family business’ story didn’t actually start in the Niagara Region – it began in Kalamazoo, Mi., in 1969.

“My father [John Beeke] was a homebuilder from Kalamazoo,” explains Jeff Beeke, who co-owns the family business with two of his brothers, Mark Beeke and Tim Beeke, ever since John retired seven years ago. “My grandpa, Louis, convinced my father to come down to Niagara and build a house for him.”

When John arrived in Niagara he was shocked to see the pre-hung door market wide open to opportunity.

“No one was selling pre-hung doors in the Niagara Region, so he started bringing in machining to build them and sell them to local builders,” Jeff recalls.

When John arrived on the Niagara scene, any local residents, contractors or builders that were interested in these types of doors had to work with local carpenters that needed to build the units on site. A few of the local carpenters were not thrilled about his new product offerings throughout the region, but John persevered and jumped head-first into growing his business.

“He started right into the wholesale business. He built for apartment buildings and bigger complexes for 15 years,” Jeff says.

The business did well out of the gate and outgrew its first location – a barn on a dead-end road named McSherry Lane – within its first two years of operation. John expanded in 1971 and built a second location on Highway 20 that operated as the company’s base of operations for the next 38 years.

At its peak growth, the company expanded its reach to service builders and contractors as far as the Toronto area.

“At one time we had two other outlets in Hamilton in the 1990s,” Jeff recalls.

But after the punishing recession in the ‘90s homebuilding market, and getting burned on a few deals by unscrupulous builders in the Toronto area, John decided to reduce his radius and build pre-hung doors to serve the company’s loyal base of customers in the St. Catharines, Niagara Falls, Niagara-on-the-Lake, Welland, Dunnville, Grimsby and Fort Erie areas.

“We got focused on keeping and improving our Niagara business,” Jeff says. “Our typical work area is the Niagara Region and a bit into Stoney Creek and Hamilton, but we’re pretty choosey about that. We service what we build so we don’t want to be too far out.”

In 2009, John moved shop one more time and set up at the company’s current location on Kottmeier Road, by the intersection of Highway 406 and Highway 20.

“We specialize in all residential doors, interior and exterior, trim and hardware,” Jeff says. “Exterior doors are available in wood, fibreglass and steel, pre-finished; either painted or stained. Customers have the choice of doing their own finishing as well. Frames for the exterior doors are available in vinyl, composite or wood; either pre-finished or not. Most of our door units are custom retrofitted to existing homes, so all of our units that we install are pre-measured by us and made to specific sizing to ensure proper fitting upon installation. Custom widths of jambs, brickmoulds and sills are all part of proper fits for our door units. We also supply local builders who typically do their own installs.”

From more common standard door units to custom door units with specialty glass with sidelights or shaped transoms, Niagara Pre-Hung Doors is set up to do them all.

“Interior doors vary from paint grade to stain grade in any wood species. Panel doors or glass panels, frosted or different textured or patterned glass as well,” Jeff adds. “So there’s a big market we fill.”

As we walked the shop floor, Jeff pointed out a variety of handcrafted custom doors.

“Every unit you see here is for a person’s home,” he says, proudly. “We mill our own frames so they’re a little stronger, a little thicker. All of our components are a little more heavy-duty than you typically find at a lumber store.”

Staying current
Jeff says that it has been vital for he and his brothers to stay proactive in the selection of doors and hardware.

“We try to stay on top what’s trending, stay on top of what’s hot,” he says. “If we’re going to sell doors, we have to sell what’s current.”

Having a showroom that can display all of the latest trending doors and hardware is another key aspect of the family business. To showcase the latest and greatest, the company built a 3,000 square foot showroom that you immediately walk into when you enter the building from its main doors.

Another challenge that is an important element to keeping this business healthy is having a reliable supply line for components, Jeff says.

“The big thing is finding suppliers you can rely on,” he says. “A lot of the suppliers will offer stock programs – for our jambs, for example. A lot of them will stock our own stuff and it’s up to them to replenish it. You just have to be able to rely on them to have the stock on hand.”

A loyal crew
Between the company’s administration staff, people working on the shop floor and installation crews, Niagara Pre-Hung Doors currently employs about 20 people year-round. And unlike many other companies in the manufacturing world, these guys have no issues with employee retention.

“A lot of our guys have been here a long time,” Jeff says. “Part of your success is your employees. We never have a problem with people coming in late or always calling in sick. We can rely on each other, it’s a real team effort.”

“We really don’t have a lot of turnover. There’s a few reasons for that. For one, we want to make sure we treat them right, and we pay better than fair,” Jeff explains. “We like to treat them like family, so they’re not just a number.”

Jeff knows plenty about family. He is one of 13 children: eight boys and five girls.

“So you can imagine when my Pops started the business, it wasn’t just all roses,” he says, smiling.

All in the family
When Jeff was about 30 years old, his father started rolling out shares of the company to himself and his brother Tim – the start of John’s succession planning. Jeff and his brothers are the second generation to take up the family business. Jeff’s son, Joe, who works on the shop floor, is the third generation learning his family’s craft.