Surely the most awe-inspiring gift made by human hands for the eye are stained glass windows, such as the majestic examples that grace cathedrals in Europe. An ancient craft, it lives on in the hands of highly trained master glaziers like Lynette Richards, who is currently immersed in what, for a practitioner in Canada, is perhaps the project of a lifetime.

Working from small paintings prepared by a Lebanese iconographer living in Montreal, Richards, founder and owner of Rose Window Stained Glass in Terence Bay, N.S., with the assistance of her apprentice, has been working through a complex series of steps toward what will, in 2023, be nine windows in the Church of our Lady of Lebanon on Clayton Park Drive, Halifax.

Each window, measuring 12 feet tall by five feet wide, will require around 600 pieces of cut glass, many of them exquisitely decorated. Richards demonstrates, gently brushing on a “paint” of grey glass powder suspended in a liquid medium that will later cook off in her kilns, leaving her scenes permanently fused to the glass. “The painting is extremely time-consuming. Every piece of glass has to go through the kiln at least two times,” Richards explains.

Replicating the painting in styles and materials appropriate to a period is just one of a master glazier’s many skills. “It takes a lifetime to master the painting, even if you come from a different painting medium,” Richards explains. “The paint is made of ground glass and metal oxides, suspended in various mediums to gain various effects; for example, I can apply a silver stain and yellow emerges from the kiln, a product of the silver nitrate replacing salt molecules in the glass.”

Richards has had to master other skills too, skills that have changed little in 1,000 years, according to Richards. Many she learned during her three-year apprenticeship to an Ontario-based master glazier, others in the three decades that have followed as a master glazier herself, honing her craft. “Identifying characteristics of the architecture, materials and the historic era; studying the quality of light; then designing, drafting, engineering the stained glass to the building using things like rebar and T-bars; cutting glass to fit the pattern; painting, engraving, assembling the window; and installation,” she lists.

There is an ocean of difference between the stained glass blue jays, lighthouses and other such pieces found in craft shops and the stained glass windows designed by a master glazier as part of an architectural system. “They won’t last 1,000 years. They probably won’t last 100 years. They are not really part of the same repertoire,” Richards comments.

So that the eye need not battle excessive contrast, Richards controls her colour choices. “How do I moderate the light enough [think: stopping down a camera aperture] in Our Lady of Harissa (a white statue) alongside dark blue so the viewer sees a harmonious image? I would paint differently for a southern exposure than for a northern exposure. This is why stained glass is so specific to architecture.”

Asked what her favourite tools are, Richards lays out three small items: a lead knife, a glass cutter and grozing pliers for clipping the edges of pieces of glass – three essentials that would have been near at hand for any glazier in the past millennium. 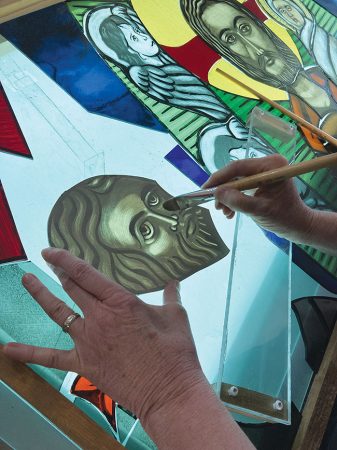 Richards applies special paints to glass pieces that will later be fired in a kiln. Photo:Carroll McCormick

“In Europe, stained glass evolved as an architectural art. It was a trade, so it was anonymous. It was learned on the job. They were folk artists in the truest sense. It is a 1,000-year-old guild in Europe,” Richards explains.

The learning never ends, she says. “Reading, reading, reading. I didn’t learn it all through my apprenticeship by any stretch. You learn a lot by doing window removals and restorations. Thirty years in and I am still learning.”

Richards’ compact shop, roughly 650 feet square, is perfect, she explains. Stained glass windows are built and transported in sections that should not measure more than nine square feet. “It’s not the size of the shop, but the magic that’s in it,” one might say.

Many questions come before the first piece of glass is cut. “The first one I ask a potential client,” Richard says, “Is how is the window going to be installed? Free hanging? Installed in the wall? Throwing light here? What is it going to do? Is the window for the house or for the occupant? In my professional opinion the design time is as time-consuming and valuable as the making of the window.”

With time on peoples’ hands during the pandemic, some creative commissions have come her way. On the other hand, supplies became more expensive or unavailable. “A pound of solder was $14, pre-pandemic. It is $30 a pound now. Some manufacturers shut down their furnaces during the pandemic. There used to be a supplier of glass from Poland. I was going to use them for this job, but they shut down all their furnaces.”

Come installation time, Richards holds her breath. Have the parties responsible for their part of the system (architects and project managers) accepted Richards’ engineering advice, or have they succumbed to hubris? Richards emphasizes, and emphasizes again, that stained glass windows must be understood as part of a system that includes the design lines, glass, lead, putty, reinforcement, window frame and storm glazing. Building for a wood building is different than building for a stone building. A weak link in this system will contribute to the failure of the stained glass.

For example, she says, “With many styles of vinyl windows, there is no place to anchor the stained glass.” Many builders who are familiar with installing plate glass believe a quarter inch clearance all the way around is the ticket. They will be wrong. Now the system won’t support the stained glass. The happiest project manager is one that listens carefully to Richards, not one who falls into the trap of thinking, “Ho hum, this is just another window. I have this licked.”

Consider the protective coverings that are sometimes installed to protect the windows against, say, vandalism or heat loss. “Stained glass used to be the window between the interior and the exterior. Screens and storm windows add complications to the stained glass window. Understandably, people want to put plexiglass or glass in front of the window. Plexiglass yellows. Intense heat builds up between the storm glazing and the stained glass window. The expansion and contraction does incredible damage. Condensation rots the wood frame. Heat expands and balloons the glass. But because such coverings are essential, there are solutions. 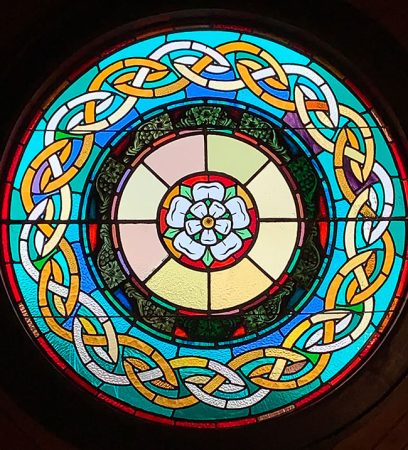 Installed properly, stained glass is low maintenance. “Don’t use Windex or ammonia on stained glass windows. Just dust them. Mostly they do not need a lot of care. Windows should be monitored though, for cracks or bowing,” Richards explains. The special putty of double boiled linseed oil, whiting, turpentine, and lamp black that Richards rubs on completed windows to fill any gaps in the lead came (the lead between each glass piece), to make them airtight and waterproof, will need attention. “It dries out after 80-100 years. If you don’t take care of the putty, the window will go out of plumb, and the glass may crack,” she says. Vibration takes a toll, and rotten wood will cause stained glass to fail.

Repairing stained glass is yet another skill. “I know what makes stained glass magical. It is not about uniformity and conformity. I can usually put a window back together, so it looks like the original.” That is, there may be differences, but Richards knows how to make any differences blend in, as if the repairs were always part of the original window.

Oh, and what is the best way to view stained glass? “To me the greatest love is that stained glass is meant to be viewed while standing in the dark, with light on the other side of the window,” Richards says. Keep that in mind the next time you go into a dimly lit church.