A mix of new and tried-and-true works in Pembroke. 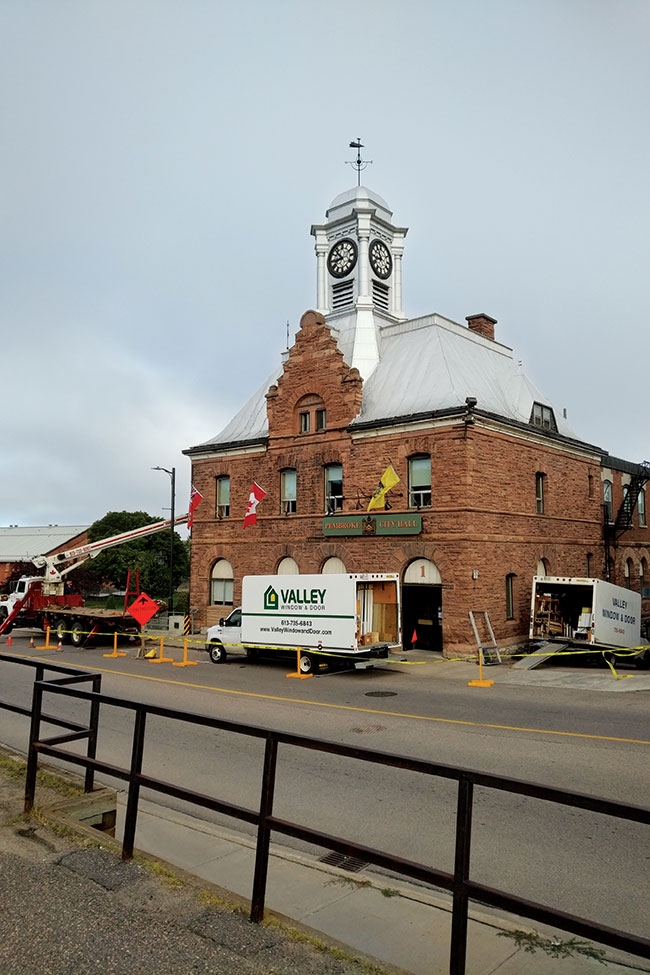 Here’s one they’re proud of. Valley Window and Door recently put new windows on the Pembroke town hall, which used to be the post office.

When Ian Lloyd and Jeff Jessup started working at Valley Window and Door in Pembroke, Ont., over 20 years ago, they didn’t know each other – and they didn’t know they’d end up someday being the co-owners of the business. Now, over two decades later, with its biggest business challenge to date behind it, the business is going better than ever.

Valley Window and Door was started in 1985 by Ron and Dennis Moss. In 1995 or so, both Lloyd and Jessup started as installers and by 1998 Jessup had started dabbling in sales. When Dennis passed away in 2009, the talks that had been going on among the four about an ownership transition got serious. In 2011, Jessup and Lloyd made the purchase. “I was in sales full time by then and Ian was doing the scheduling and day-to-day business management,” says Jessup. “So nothing really changed, other than my wife, Sherri, and Ian’s wife, Julie, started working here with us that year. We definitely wouldn’t have been able to do it without them, or our great staff.”

A lot of competition has come and gone over the years, but since he and Lloyd took over in 2011, Jessup says most other window businesses in the region are still in operation. They have about 10 major competitors in the area. “Nowadays, salespeople from businesses in southern Ontario also come and knock on doors with high-pressure sales,” Jessup adds. “It’s a good thing in that homeowners get an estimate done, but we hope they get an estimate from us as well and understand we will be here in the years to come to solve any issue.”

Although they were obviously learning a great deal from the previous owners before they became the owners themselves, Lloyd and Jessup were also given input. For example, in the early 2000s, they all noticed that a lot of the bigger Canadian manufacturers were being bought by American firms, and some of the time that wasn’t a good thing. Valley wanted to use Canadian manufacturer Vinyl Window Designs exclusively and Jessup says that’s a big part of who Valley Window & Door is today. “We thought that would help us grow and it has,” Jessup notes. “We can offer our customers a lot of options compared to our competition. And because of the quality of their triple-glazed windows, we’ve promoted them strongly and I would say they make up 70 per cent of our window sales now.”

Because the previous owners were contractors, Valley Window & Door always offered small renovations like screened-in porches. That’s grown a little every year, but Jessup says it’s more of a focus now. “The renovation aspect, which is still small, feeds the window and door sales and vice versa,” he explains. “In 2009, we started with installation of Postech helical piles, and all three aspects work together. We brought in Postech as a better way to construct the foundation for sunrooms compared to a concrete foundation, and the building officials are pretty familiar with it now. It’s a simpler and faster solution for contractors, so it’s an easy ‘yes’ with a lot of them and they subcontract that part to us.”

Because of this diversification, the business has been able to keep a core staff and keep its very experienced staff busy year round. However, recruiting has become more difficult over time and Jessup and Lloyd believe it’s going to get worse. They pay as much as they can and have had benefit packages in place for years, including a fairly new RRSP contribution plan, but Jessup notes that this can only go so far as it is the customer at the end of day that has to pay for it all.

GreenON blues
By far, the biggest business challenge in Valley Window and Door’s history has been the 2018 GreenON rebate program for high-efficiency windows offered by the previous provincial government. It was tough to deal with on many levels and its effects are still lingering. “Staffing was a huge challenge, of course, because of the volume of work. And it was such a huge rebate [$500 per window] that it’s taken away future business,” Jessup says. “We’ve had many customers over time who normally do a few windows every few years. But those customers, because of the huge rebate, did everything they had left to get done last year. Particularly in this area, where not everyone can afford to get all their windows done at once, we’ve built a client base for years. It’s word-of-mouth that matters most and keeps business coming in, and not only did we have many big one-time installations last year instead of sales continuing to be spread out, but the continual word-of-mouth referrals are also impacted.” Indeed, sales so far this year (which Jessup does point out had a very late and chilly spring as well as some regional flooding), are only 40 per cent of those of 2017.

Here’s one they’re proud of. Valley Window and Door recently put new windows on the Pembroke town hall, which used to be the post office.

While Jessup understands fully that GreenON was a great program for customers, Valley Window and Door has also had to battle negative perceptions that the program created – a battle that’s not yet over. “Being so swamped with work, the program made us look at times like we couldn’t run a business,” he says. “Because we couldn’t fit some potential customers in by the program end date that was announced when the new provincial government took over, we had dozens of them threaten us, telling us they would sue us, never hire us again and so on. Some told me to hire more people and I would tell them I have already increased my window install crews as much as I can reasonably do, and asked them that if I were to hire people off the street and send them to their houses if they would want them there. Some understood in the end, but I was literally trying to talk potential customers out of suing us instead of helping them meet their needs. It forced me to stand up for my company and talk to people in ways that I am not used to and don’t like, but I was in a corner. It was the biggest challenge in my 25 years in this industry and I never want to see anything like it ever again.”

However, the business’s solid reputation remains, and Jessup and Lloyd are confident it will see them through. “There’s a reason we’re still here after 25 years,” Jessup says. “If we make a mistake, we fix it and we don’t ask for any money until everything is done. We learned that from the old owners and we will always run things that way. And we respond to service calls very fast, and we always have our own service person go out for urgent calls. It’s important to us that it’s not a manufacturer’s service person who goes in. We want our own person to go.”

Growth behind, and ahead
Lloyd and Jessup have already grown the business to double what it was in 2011. Besides building the renovation side of things, they have expanded their entire customer radius to a two-hour drive, east to communities like Bancroft and farther into Quebec across the Ottawa River, where all their services are fully licenced. They’ll continue to do radio and Facebook marketing, but word-of-mouth will likely always be the mainstay. They’ll also continue to look at new opportunities that might be a good fit.

And along with their reputation, the solid partnership between Lloyd and Jessup will always be a strength. “We’re similar in some ways but different in others and we respect each other’s ‘territory,’” Jessup says. “It’s nice to have each other to rely on as opposed to being a sole owner. Because we both worked here as installers, we both understand what our crews are going through and we can support them. And between the two of us, we’ve never had a situation that we couldn’t overcome.”

Moving forward, they are both cautiously expecting that sales levels in 2020 will be back to what they were in 2017. “We will get there,” says Jessup. “Things started to pick up in mid-summer and we’re really busy this fall.”