The total value of building permits decreased 1.9% to $11.2 billion in December. Declines were reported in both the residential and non-residential sectors. 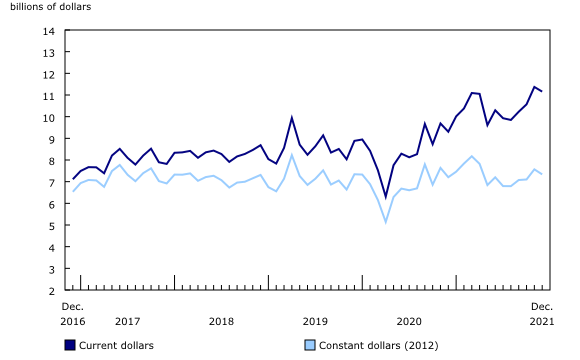 The total value of residential permits decreased 2.7% to $7.7 billion following a strong November (+13.3%).

Multi-family permit values declined 6.0% to $4.1 billion, with British Columbia (-20.3%) responsible for most of the national decline, reversing November’s gain.

Construction intentions for single family homes were up 1.3% to $3.6 billion, led by Quebec (+14.6%). This was the third consecutive monthly increase for this component at the national level.

Institutional and industrial gains cancelled out by commercial component

The total value of commercial permits fell 7.9% to $1.9 billion in December. Most of the decline came from Alberta’s 55.6% drop, reflecting the BMO Centre permit issued the previous month.

Construction intentions in the industrial sector rose 8.4% to $762 million. A $46 million aluminium mining building renovation permit in Quebec (+49.9%) contributed notably to the component.

Overall, the total value of non-residential permits remained unchanged at $3.4 billion as movements within the various components cancelled each other out.

The total value of building permits surged 25.6% to $126.5 billion in 2021, the strongest annual growth ever recorded. However, material price and labour cost increases in the construction industry accounted for almost two-thirds of the increase. On a constant dollar basis (2012=100) the total value of building permits still increased by a robust 9.3% to $88.5 billion.

The non-residential sector in 2021 was up 17.1% to $39.6 billion, continuing its recovery to 2019 levels. Only the institutional component exceeded pre-pandemic levels, while the commercial and industrial components were both roughly 8% below 2019 totals.