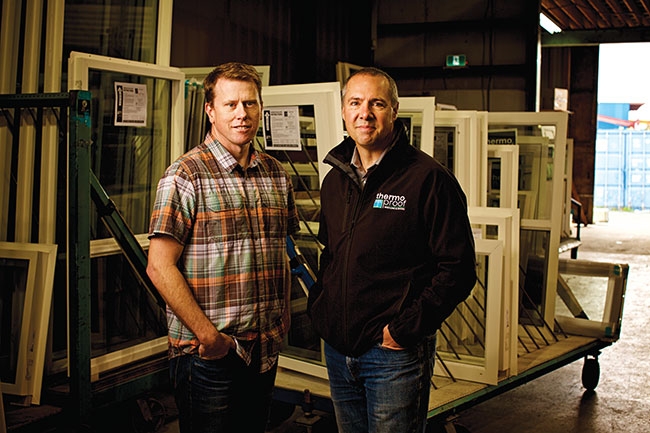 Drew (right) and production manager Shaun Goode take Lean-inspired “gemba” walks through the shop where they visit each work station to check on employees’ morale, collect suggestions and troubleshoot problems. The proactive approach has measurable benefits for productivity.

Cam Drew is a busy guy. As the managing partner of Chemainus, B.C.,-based Thermoproof Windows and Doors, Cam has the same responsibilities that any person in charge of growing a busy manufacturing and installation company with more than 50 employees would have.

A key difference is that Drew walks the walk when he speaks about supporting the community. He’s been recognized twice with the distinguished Paul Harris Fellow award from two different Rotary Clubs. He also has the Scroll of Honour from the City of Duncan and is an honourary Kinsman and past president of the SPCA. And when we say community involvement, we mean involvement with his business community as well. Drew sits on the steering committee for the Home Performance Stakeholders Council of B.C. that is tasked with driving higher energy efficiency in the renovation market, and is part of the advisory group for the Pan-Canadian task force, which is working with the federal government to set out aspirational goals for energy efficiency until 2030. “The government is going to put a lot of pressure on Canadian window manufacturers to meet these goals,” explains Drew.

Fenestration Review caught up with Drew at the 2018 GlassBuild in Las Vegas to find out what sets Thermoproof apart from the competition.

“We have five values that we work with,” says Drew. “Safety, quality, communication, teamwork and innovation. When we do our regular reviews with our team, those are the five areas that we focus on.”

Drew and his team know the geographic location their windows are going to live in. “On the west coast, especially Vancouver Island, you need to build a rainscreen. We know they are going to get a lot of rain. You have to design the window appropriately. It’s all about moving water away.”

They are also going to get a lot of salt water spray because most homes are within a few kilometers of the ocean. According to Drew, all the parts that Thermoproof builds into a window are either stainless steel or non-corrosive. “We can literally dip the window in salt water and it would be fine. If we’re going to back it with a lifetime warranty, we better put good components in it.”

Thermoproof was founded in the Chemainus Valley on the east coast of southern Vancouver Island in the late 1970s, manufacturing wood and aluminum windows. Drew, his wife, Maeve, and Drew’s shareholders acquired the company in 2007, about one year before the Great Recession. “We enjoyed around 14 good months before six challenging years,” recalls Drew with a laugh.

With the changes to the B.C. Energy Efficiency Act, Thermoproof discontinued aluminum products in 2009 shortly after the acquisition and went strictly vinyl. “We were making our own sealed units but discontinued around 2011 to make room for more growth. In 2012, we added new construction and installations to our area and stayed as a supplier for the rest of Vancouver Island and the Gulf Islands.”

Drew shares that installation has been a helpful way to grow the company without putting as much pressure on capacity. “Our plant isn’t very large. We have 18,000 square feet under roof. We’re running pretty tight. I just talked to the guys. They’re pouring more cement and adding more outdoor storage right now. We’re maxing out our property because we want to stay. And we’ve got the extra locations.”

Drew (right) and production manager Shaun Goode take Lean-inspired “gemba” walks through the shop where they visit each work station to check on employees’ morale, collect suggestions and troubleshoot problems. The proactive approach has measurable benefits for productivity.

Thermoproof built a new showroom and added a warehouse in Duncan and then, in 2016, Drew acquired a building 140 kilometers north in Courtenay, B.C., allowing the company to open another showroom and provide supply and installation to the largest city in the Comox Valley.

Before being acquired by Drew and his partners, Thermoproof offered a 10-year pro-rated warranty. “We found that if a window was out of warranty, we were still fixing it. Customers are often surprised if we go back for a window that’s 18 or 19 years old and we completely refurbish it and fix it up for them. We decided that if we’re going to go anyways, we might as well give the lifetime warranty. And include labour and the screens. It’s been a great selling feature. Customers want peace of mind.”

Servicing the Gulf Islands with water access only can be tricky. “We coordinate scheduling directly with the barge, however there is that window of opportunity. It’s tide-specific. It can’t just be any time of the day and you want to make sure your order is full because you’re going to an island somewhere.”

Like many manufacturers, Thermoproof is on a Lean journey. “Our commitment to a daily ‘gemba’ walk has been very successful,” says Drew. Gemba, which loosely translated means “where the work is happening,” is a part of the Lean manufacturing philosophy. “Every morning at 9:00 a.m., our management team, up to five individuals, will start at the last work station and then we swim upstream. It even includes administration and can take up to an hour. The questions that are most important are, “How was your day yesterday?”; “How is everything today?”; and “Do you need anything?

“We check their metrics and quality control. We’ve found is that it really cuts down on recuts and reworks. Quality has drastically improved. Communication has increased. People are being heard. If somebody has a good idea or if something’s gone wrong, we’re never more than 24 hours away from hearing. That’s been a very valuable tool in running our company on the production side.”

“We had only been running the company for a year and a half when the Energy Efficiency Act came into place,” Drew remembers. “Some of our dealers thought it was us forcing them to put low-E in. We had to educate them that for one, it’s mandated. But two, it’s a really good idea.”

Drew and his team also trained Thermoproof’s dealers about elevation-specific glass. With thermal performance regulations set to change again, no one knows where the moving target will land. “Every company is in the same boat, we don’t know where we need to be and when,” says Drew. “Canadian manufacturers know now how to build a window so it’ll be structurally sound. We need to work on new designs to increase our thermal performance. We just don’t know how much we need to do and when because if we go all the way to the highest thermal performance possible, the customer will not be able afford it.”

Rich Porayko is a professional writer and founding partner of Construction Creative, a marketing and communications company located in Metro Vancouver, B.C. richp@constructioncreative.com
Print this page