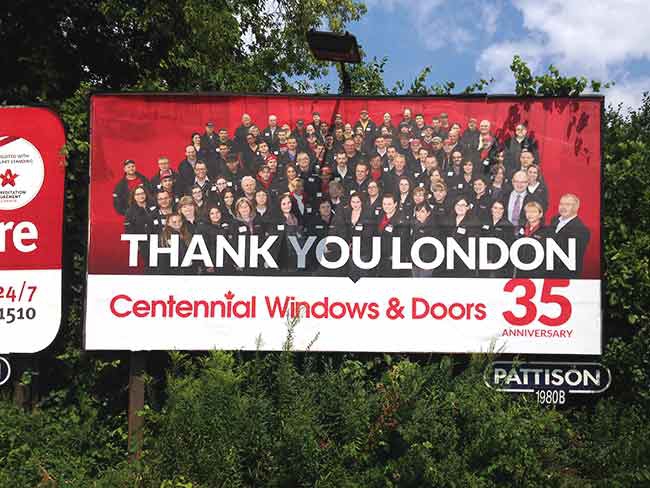 Billboards like this appeared all around southern Ontario this year. Owner George Warren has received calls from mayors thanking him for thanking them.

After 35 years in business, Centennial Windows and Doors has taken the time to thank its 65,000 customers across southern Ontario. Billboards like the one pictured have appeared in cities across the province all summer.

As a marketing initiative without a specific sales message, it’s a cost most Canadian window and door companies would hesitate to take on. But, as usual, owner George Warren’s interest in taking the right approach to business rather than chasing the instant dollar has reaped benefits that will be important to the long-term success of the company even if they are hard to quantify. Warren says he has taken phone calls from mayors in the towns where he has posted the ads, thanking him for thanking them. “It’s remarkable, the impact of a simple ‘thank you,’” Warren muses. It’s thinking like that that has kept Centennial in business while other fabricators have fallen prey to shifting market forces over three decades.

Warren credits great people first and foremost for Centennial’s longevity. That’s unsurprising – few companies last long without a track record of hiring and retaining top talent. But Warren’s connection to his people seems genuine. He knows the name of everyone on the shop floor. As we left the interview, two young men were just arriving for job interviews. Warren seemed to know a lot about them already and was happy to have a relaxed conversation with them right in front of me in the lobby. Perhaps it helped that they had just arrived from his native Newfoundland. But if this is any indication of the interest and camaraderie that Warren holds with even prospective employees, it is not hard to see why he’s had success connecting with excellent personnel.

Finding great people has involved more than cruising LinkedIn. Warren says it’s important to know the industry and meet talent by getting out among your peers. And he’s not reluctant to reach outside the industry to bring in the skill sets he needs. Warren has obtained painters from the automotive sector and engineers from the machinery manufacturing world to build custom automation for Centennial. As important as getting those people is listening to them and putting their ideas into action, Warren says. He looks for individuals with an entrepreneurial spirit who are interested in contributing to a team. “It’s about always looking for people who are better than I am,” he jokes. Those who do stick with Centennial really stick. Warren says he has many employees who have been with the company for more than 20 years, and in some cases three generations of a family has worked at the plant.

Warren’s more nuanced answer to the question of Centennial’s success is “systems.” He believes that the specific procedures, policies and organizational framework that Centennial has put in place has led to better products and better service delivery. Developing those systems has arisen from a fundamental commitment to build the best window on the market. That focus has led to steady innovation with a goal to constantly improving. Warren says the company is constantly working on its systems down through the entire business chain from marketing through production to installation.

Warren has found that having consistent processes in place helps him develop his staff. One of the reasons he is able to bring in labour from other trades and have them succeed at Centennial is because there is an established way of doing things that anyone can learn if they have the right basic aptitudes. Watching employees grow in the company and take on ever-greater responsibilities is one of Warren’s great pleasures. “It’s like a fire,” he says of his efforts to develop talent. “You have to be constantly feeding it.” Warren also takes advantage of relationships with the local University of Western Ontario and Fanshawe College to attract bright young minds. There were several co-op students working in the shop on the day of our interview. he has installation crew leaders that started as co-op students 10 years ago.

Warren estimates that 90 per cent of the machinery in his plant was designed in-house, including paint and coatings applicators, CNC machining centres, graining machinery and foam-filling equipment. His IT department wrote the machinery control and enterprise software that runs the company.  Centennial has designed its own custom painting process for jamb extensions and casing trim, its own curing process and its own installation gasket to replace foam. Centennial can finish and dry 10,000 feet of trim and 35 interior doors in an hour. Jamb extensions are supplied finish-painted to the customer’s specifications.

Centennial is now expanding its business into new-home construction. Providing the same quality windows and doors as its replacement business, Centennial sells directly to builders, custom manufactures, and provides full installation for new home developments. Centennial holds the warranty and delivers a welcome package to the homeowner shortly after they move in.

This is another aspect of Centennial’s business made possible by internal control of processes. Communicating with hundreds of customers every day, the company has had to become very good at logistics, organization and coordination. Warren does not think it is possible to get the same level of consistent performance from a dealer network. The company stays in constant contact with the contractor through mobile communications and information about the progress of a build comes to a centralized planning point at the company headquarters. Because the installer is also the manufacturer, and because Centennial has a just-in-time manufacturing process, they are able to react to changes in the schedule without creating miscommunication and backlogs at any part of the delivery chain. The windows are ready when the installer needs to take them to the site, and the installer is there with the windows when the contractor is ready for them to be put in. “Installation drives the making of the windows,” Warren explains.

Centennial is growing, with plans in place for a new 100,000-square-foot manufacturing addition next to the one it opened just last year. Warren says it will be used to produce a new hybrid vinyl/aluminum commercial product with the same thermal performance ratings as their residential products.  They are ready if and when vinyl becomes approved as a non-flammable material for high-rise construction. All aspects of the product were developed in-house, including the thermal break. Production is slated to start mid-October. Warren is hiring 30 people to get ready for the launch.

Centennial has 15 branch areas across Ontario: London, Chatham, Kitchener, Brantford, Windsor, Listowel, Burlington, Barrie, Owen Sound, Niagara, Orangeville, Sarnia, Durham, Peterborough, and Newmarket. Its branches are supported by five showrooms and each covers a large territory, supporting a number of sales personnel who live in and serve the counties included in the branch. After 35 years mostly in southern Ontario, Centennial is ready to break out. Warren has plans in place to open branch offices in more locations across the country.

One of Centennial’s claims to fame is its status as a pioneer of Energy Star and Canadian Standards Association certification. Warren worked closely with Steve Hopwood of Natural Resources Canada to develop the Energy Star program right from the start. All of Centennial’s windows are independently tested by CSA certifying that the products manufactured daily are of the same quality as the windows submitted for CSA testing. Certification requires voluntary auditing and includes labeling and confirmation of energy ratings on all products.

Warren sees a future where low-priced products from offshore producers make it more difficult for higher quality manufacturers like Centennial to compete. Educating the consumer is key, he thinks. It’s part of a larger social movement toward instant gratification and an ever-diminishing understanding of craftsmanship. Warren taps his fingers on the table, mimicking keyboarding: “All the young people these days are really good at this,” he says. “But where are you going to find the people who can work with their hands?” With fewer and fewer people who do work with their hands, it becomes more difficult to sell quality made by human hands. Warren is investing heavily in worker training to make sure his staff gets the needed skills, even if they don’t come in his door with them. But he’s not sure what the rest of the industry is going to do.

Warren’s ideas about quality and training mirror his overall philosophy that started with a determination to make better products and retain control of his installation services with a view to delivering the best possible results to customers. It’s a view that puts the customer’s experience first and foremost, a view that Centennial continues to exemplify by saying ‘Thank you.” It is the approach that has kept them around for 35 years, and is likely to do so for at least another 35 more.

Billboards like this appeared all around southern Ontario this year. Owner George Warren has received calls from mayors thanking him for thanking them.