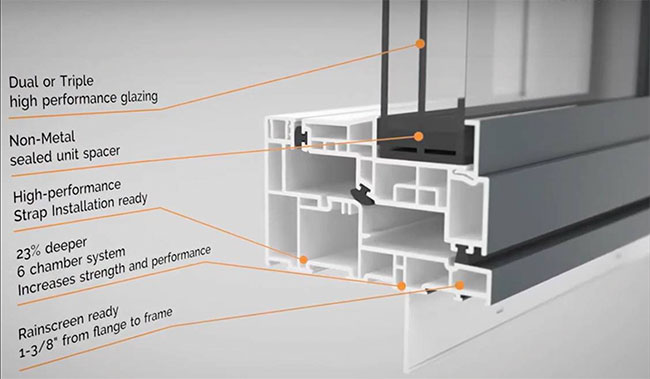 The industry is working towards transforming the Canadian window market into something that’s more accepting of higher-performing products. This picture illustrates how the concept of energy efficient windows can be explained to customers. Illustration courtesy of Westeck Windows and Doors.

For several decades now, environmental advocates have wished Canadians would spend more on their windows. But the math hasn’t worked out for homeowners. Now, the question of how to move the market upstream has gained new urgency.

As we move on from the hallmark year of 2020, governments around the world are under more pressure than ever to ensure carbon emissions within their borders are minimized or reduced. The government of Canada, along with others that signed the Paris Climate Agreement, wants its companies and its citizens to use less energy. With citizens, there’s a focus on high-performance windows so that the energy used to heat and cool houses is minimized.

It was already five years ago that Natural Resources Canada launched the Market Transformation Initiative which aims to encourage more uptake of high-efficiency windows. Will this initiative work? What roles should the government and the fenestration sector play in making the use of these windows more common? This topic was the focus of a recent panel discussion at the 2020 Fenestration Canada WinDoor event. Panel host and Fenestration Review editor Patrick Flannery noted that through better windows, huge building envelope efficiencies can be made. But while you can legislate what types of windows must be used in new builds, he asked, “what do you do about renovations and the rest of the market? Governments are looking for answers from the industry on how we’re going to transform the Canadian window market into something that’s more accepting of higher-performing products.”

The panel experts span a range of stages in marketing these products. Thermoproof Windows and Doors on Vancouver Island (Cam Drew, managing partner) has just recently started; Euro Vinyl in Woodbridge, Ont. (Laura Weil, vice-president) has been selling them for some years and Tiltco in Toronto (Jay Madha, president) has been doing it for decades, though he’s shifted to commercial in recent years.

Perhaps the first step to having more uptake in high-efficiency windows is to ensure there are a number of products to choose from. Like many other firms, Euro Vinyl is increasing its high-efficiency product lineup. It now offers a sliding door that can take triple panes and will be offering an enhanced casement system next year. Thermoproof is currently testing a new double-triple slider and a triple casement, but Drew notes that “we have a two-tier rebate system for renovations here in BC, with the second tier for windows of a U value 1.22 or lower…but our window for the second tier is in testing.”

Weil adds that demand continues to grow for larger windows which can’t always include more efficient glass, and discerning customers with high incomes will beef up their heating system if that’s what they have to do to have more glass in their homes. Madha echoes these thoughts, noting that customers will say “I want energy efficiency but I still want my glass and my views; so it’s a compromise.”

Drew agrees, explaining that he approaches these discussions in a similar manner to how weather forecasters in some parts of the world talk about the day’s weather in comparison to the day before. “I think it’s brilliant,” he says. “So, we talk to them about their current home. They point out where it’s warm and we look at why and where it’s cold. You put them in their current state so that they can talk about their future state.”

Rebate solution?
There have been several rebate programs over the years at the provincial and federal levels to encourage purchase of high-efficiency windows. In Ontario a few years ago, the GreenON program offered $500 per window and got overwhelming traction. A current rebate program in BC of $50 for a double-pane window with a U-value of 1.40 or less, and $200 for a window that meets 1.22 or less, says Drew, has not had the traction that the government would have liked to see. “There were a lot of steps to getting to the rebate and that put homeowners off,” he says. “Interest is picking up and some companies are doing a much better job [of promoting it] depending on their inventory.”

Drew adds that the Home Performance Stakeholders Council (funded by the B.C. government, BC Hydro and natural gas firm, Fortis) has discussed the idea that every house put up for sale could be required to have an energy advisor’s report, an EnerGuide number, so that potential buyers could understand the energy rating of their choices. Windows would factor in and this system might incentivize some sellers to put in high-efficiency windows, but Drew is not sure the idea “is ever going to fly.”

Shifting the market
Drew, Weil and Madha all agreed that window costs need to come down if high adoption rates of energy-efficient windows is ever to occur.

“I like the 1.05 U-value window because it allows most manufacturers to keep manufacturing, but that’s my personal perspective,” says Drew. “I know we’ll meet 1.05 and we’ll get lower than that, but meeting 0.8 is where the cost curve starts to go up.”

Weil notes that from a big-picture perspective, with other things like lighting and vehicles, energy efficiency gains have been made, and it will further progress. Windows are no different.

“We’ve made progress and it’s part of the general conversation,” she says. “I think most homeowners want to have an energy-efficient home because it feels good and it’s ethical, but moving that needle has to be methodical. There has to be accessible technology available to us and, as our industry changes as a whole and smaller manufacturers are bought up by larger groups, there’s going to be a lot more money available to our industry to develop new products. I think the changes will align and create a retrofit program that’s attainable and realistic. I’m sure that needle will move. It’s just going to take some time.”