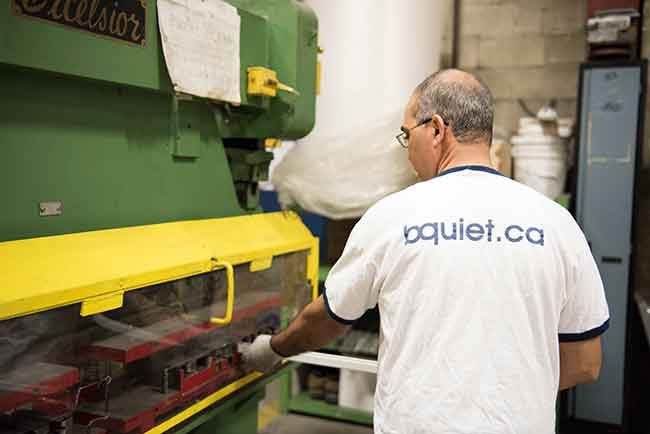 Bquiet’s window overlays are fabricated from aluminum and made to create an air barrier of specific dimensions designed to minimize sound transmission. The design is the result of significant research and testing by the company principals.

Shut the window and cut down the noise. That’s the message blared across Canada by Bquiet Soundproof Windows and Doors. And people are listening. “Sound reduction is a niche market, but one with tremendous room for growth,” says Mike Montecalvo, co-owner of the Toronto-based glass window and door manufacturer.

“Marketing has been our biggest challenge as most consumers don’t know our product exists or how it works. We’re educating them, one customer at a time.”

The background of Bquiet’s principals, Montecalvo, Anthony Gucciardi and Dave Rosolen, is in replacement vinyl windows and doors. They got involved in soundproofing about 10 years ago after receiving negative comments and complaints from several homeowners that their new windows were noisier than the original ones.

“We began to look at alternatives like using thicker glass and laminated glass in the replacement windows,” explains Gucciardi. “This was a big step in the right direction in providing improved noise reduction. As our business grew, so too were more requests for greater noise reduction. We got inquiries from people who had replaced their windows and still had noise issues and then we began to get inquiries from condo owners.” Bquiet’s windows are installed in front of an existing pane on the inside of a condo unit, which makes them more attractive to noise-plagued condo owners who often are not allowed to remove existing ones.

Montecalvo and his partners investigated numerous glass technologies until developing the bquiet window. “We built many samples and sound booths to test our windows,” he recalls. “We needed something that was operable, slim-framed and separate from the existing windows. After some trial and error we created the Bquiet window.” Bquiet’s prototype underwent rigorous trials by Intertek Architectural Testing. “To confirm the window configuration that we developed actually worked,” adds Montecalvo. The sound reduction hinges on combining the thicker acoustical laminated glass and the airspace between the original window.

Bquiet windows are presently fabricated by a third party, though Bquiet will eventually produce its own glass to precise specifications. Designed to work in tandem with both newer and older windows, can be installed in just about any window opening and will open just like existing windows. “Reducing noise by a mere 20-30 per cent like regular windows is not what Bquiet windows are about,” asserts Rosolen. “Our windows are designed to use the proven scientific method of maximizing density and space to reduce noise by 65-95 per cent.”

Sound is heard through the weakest link. The ability for something to reduce the amount of sound that passes through it is measured in STC or Sound Transmission Class. It is expressed on a scale of zero to100, where 100 means complete soundproofing. To achieve an STC 100 would mean zero windows and concrete walls about three feet thick. A typical house with brick walls would have an STC of about 60-65 on the walls. The problem is the windows. A typical thermal window with 5/8-inch airspace has an STC rating of between 27-29. “Therefore, the majority of the noise one hears is coming through our windows,” nods Montecalvo.

A Bquiet window is a second window that is placed on the inside of an existing window. It consists of six-millimeter laminated glass with a minimum 030 laminate and heavy-gauge aluminum frames that can adapt to most interiors. The idea is to mount the soundproof window at least three to four inches away from the glass of the existing window, such that the further away the soundproof window is placed, the greater the sound reduction. According to Gucciardi, a soundproof window that is located 4 1/2 inches away from an existing window has a three- to five-point higher STC rating compared to one that’s located 2 ½ inches away. “Think of it as a sophisticated storm window,” he says. “In rare situations the Bquiet can be mounted on the outside also, but a better result is achieved with an inside mount.”

Asked how Bquiet is different from other forms of sound reduction windows and doors, particularly triple-glazed windows, Montecalvo states that when triple glazing, most manufacturers insert another piece of glass in between thermal glass therefore reducing the distance between the glass panes. “This offsets the benefit of the density of another pane of glass,” he argues. “Triple-glazed windowpanes are spaced closer together than their thermal counterparts, making triple-glazed windows only marginally more soundproof than thermal windows.”

What exactly is noise pollution? It’s defined as human-created noise harmful to our health and welfare. Among the worst offenders: Transportation vehicles, airplanes, trains, trucks, buses and cars.

Noise intensity is measured in decibel units. Human perception of loudness means a 10-decibel increase is perceived almost a doubling of loudness. Thus, 30 decibels is 10 times more intense than 20 decibels and sounds twice as loud. Distance diminishes the effective decibel level reaching the ear. Thus, even moderate auto traffic at a distance of 100 feet rates about 50 decibels. With homes and condos being built closer and closer to main streets, this noise level is getting increasingly louder.

When it comes to the effects of noise pollution, it is known that the average person cannot sleep if subjected to 45 decibels of noise. “There is mounting evidence showing the importance of soundproofing our homes,” asserts Montecalvo. “In the home the majority of noise is passing through the windows. Although most windows today are energy-efficient they do not stop noise. Home is supposed to be our sanctuary, a place we can recharge. Instead we’ve gotten this cacophony of modern living – car alarms, sirens, honking horns, the hum of appliances.”

Back to STC ratings: Most windows are thermal and are made up of two pieces of glass (usually three millimeters thick) separated by a spacer. The common space between the glass is 1/2 to 5/8 inches wide. This configuration provides an STC rating in the 26 to 29 range. Thermal glass with a 13 mm air space has an STC rating of 28. Triple-glazing with three-by-three millimeter glass with a two-by-six millimeter air space is rated at 31. By comparison, test results appear to have shown that a Bquiet window over single glazing has a 43-49 rating, and a Bquiet window over thermal glass has a 45-54 STC rating.

Noting that Bquiet’s typical customer is a 40 to 60-year-old professional who is having trouble sleeping due to noise issues at night, Rosolen points out that most of his customers come to him from researching on the internet. “They are suffering from noise and are looking for solutions either because they already replaced their windows without getting the results they expected or because they have read that triple-glazing doesn’t work as well as they’d hoped.”

Condos currently comprise Bquiet’s largest market. “And we’re still only beginning to make our mark in that area,” remarks Montecalvo. He sees many people who purchase condos from plans are amazed at how noisy they are when they move in. “Most owners assume the builder will automatically have better noise-reducing windows. Because our windows are installed on the inside ledge like shutters or blinds they can be more readily approved by most condo boards. We designed our windows to match existing windows sliders, hungs and inswing casements, allowing them to be installed in homes maintaining the existing esthetics and allowing the use of the existing windows.” Bquiet offers different thicknesses of laminated glass depending on customer requirements.

In addition to sound reduction, Montecalvo boasts that Bquiet windows also provide an extra layer of security. He declares that his laminated glass can’t be penetrated with repeated blows, and which he maintains is stronger than a car’s windshield glass. Another benefit of laminated glass, he continues, is that it provides 99 per cent protection against damaging ultraviolet rays, meaning no more fading of drapes, furniture and flooring. As well, Bquiet windows may even enhance thermal efficiency by reducing air infiltration, moisture and are available with low E technology.

Growing urbanization, with its amenities and active lifestyle has ignited the real estate boom as more and more people decide to live closer to the city centre, closer to where they work and shop, even though closer to downtown is usually a pretty noisy environment. “Bquiet Soundproof Windows allow customers to live in the heart of the city without a lot of the unwanted noise pollution it produces” comments Montecalvo. “That’s how we differentiate ourselves and how we will build our business.”