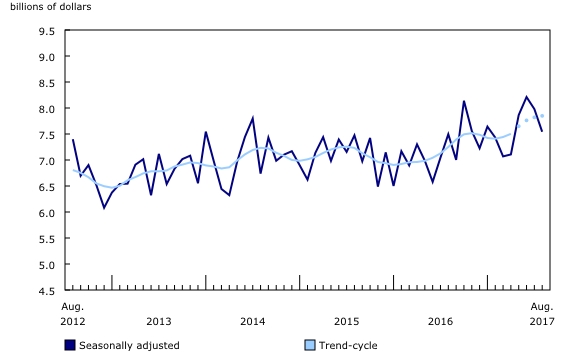 Oct. 12, 2017 – Canadian municipalities issued $7.5 billion worth of building permits in August, down 5.5% from July. This was the second consecutive monthly decrease. Despite these declines, the year-to-date value of building permits (January to August) is up 8.7% compared with the same period in 2016, reflecting a $3.1 billion increase in multi-family dwellings.

The rise of the high rise
Total construction intentions for multi-family dwellings in Canada declined in August, down 6.0% from July. However, the sector has been on an upward trend since 2009.

Montréal and Vancouver are building upwards with multi-family dwellings
The value of multi-family permits in the census metropolitan area (CMA) of Montréal outpaced single-family permits by $278.0 million in August, the greatest value difference between these two components on record for this CMA. Historically, multi-family permits have posted higher values every month since December 2010.

Population density may be driving this development. Results from the 2016 Census (census subdivision [municipalities] with 5,000-plus population) show the City of Vancouver as having the highest population density in the country, with a rate of 5,492.6 people per square kilometre. As for the City of Montréal, it ranks near the top, with a population density of 4,662.1 people per square kilometre. With little space to ‘grow out’, construction intentions in these municipalities have continued to favour ‘growing up’ with multi-family dwellings being constructed in order to fulfill housing needs.

In Quebec, the value for multi-family permits has led the residential sector every year since 2013. Thus far, in 2017, Quebec municipalities have issued $3.8 billion worth of multi-family permits, almost $1 billion more than the single-family component.