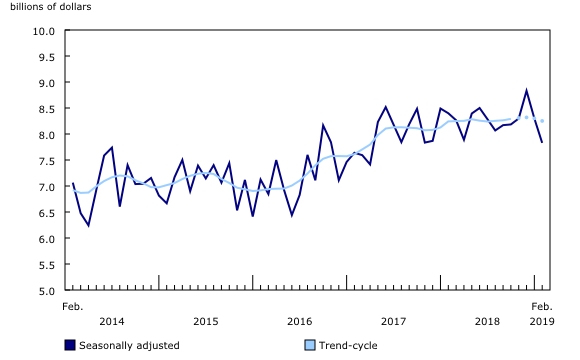 April 9, 2019 –  Canadian municipalities issued $7.8 billion worth of building permits in February, down 5.7% from the previous month. The decline was largely due to lower construction intentions for multi-family dwellings.

Provincial update
British Columbia issued $1.4 billion of permits in February, down $181 million from January. Lower construction intentions for multi-family dwellings more than offset gains in all other components. The value of permits in the census metropolitan area of Vancouver declined 20.5% to $800 million. This followed three consecutive months where permits were above the $1.0-billion mark.

The value of permits in Saskatchewan was down 34.0% to $108 million, as every component except institutional buildings declined. The decrease partly reflected changes to building energy codes that went into effect in the province on January 1, 2019. The largest decrease was in the single-family dwelling component.

The value of permits for single-family homes in Saskatchewan have been on a general downward trend since 2013. In 2018, the province issued $596 million worth of single-family permits, the lowest value since 2006. The Association of Regina Realtors and the Saskatoon Region Association of Realtors both reported a decrease in the number of home sales in 2018.