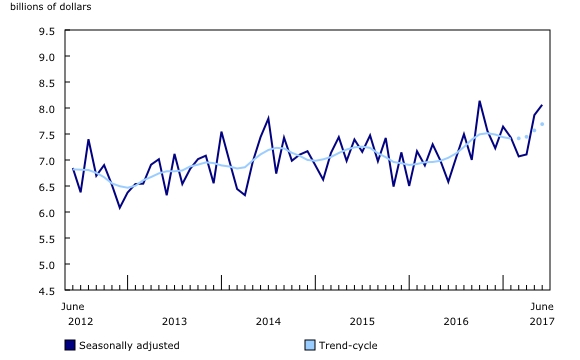 Aug. 9, 2017 – Canadian municipalities issued $8.1 billion worth of building permits in June, up 2.5% from May and the second highest value on record. Higher construction intentions for multi-family dwellings and commercial buildings were mainly responsible for the national increase. All building components reported gains in June, except for single-family dwellings.

Provinces and census metropolitan areas: Quebec posts gains in all components
The total value of building permits rose in six provinces in June, led by Quebec and Manitoba. Meanwhile, construction intentions were up in 14 of 36 census metropolitan areas (CMAs), led by Toronto, Montréal and Winnipeg. Hamilton reported the largest decline in June (-60.0%), however, this followed a notable gain in May.

In Quebec, the value of permits was up 12.3% to $1.5 billion in June, a fourth consecutive monthly increase. Gains were spread across all building components, with the largest increase in the commercial component (+25.2% to $308.9 million). In addition, construction intentions for industrial structures rose 32.3% to $152.3 million, the highest value since June 2014 and the third consecutive month the total value has exceeded $100 million.

The value of building permits for Manitoba rose 40.4% to $318.9 million in June. The increase primarily stemmed from gains in the  of Winnipeg.

The value of building permits for the Winnipeg  increased 54.0% in June to $255.6 million, the highest value on record. The value of residential permits rose 16.0% to $137.5 million, marking the fifth time in the past six months where the value exceeded $100 million. The increase in construction intentions for residential structures in the Winnipeg coincided with the implementation of the City of Winnipeg’s new Impact Fee. The fee came into effect on May 1, 2017 and caused an increase in permit applications prior to this date that are still being approved by the city.

Residential sector: Decline in single-family component moderated by gain in multi-family dwellingsThe value of residential building permits fell 0.9% in June to $5.0 billion, the fourth decrease in five months. The decline was mainly the result of lower construction intentions in four provinces, notably Ontario.

In June, the value of permits for single-family dwellings decreased 12.5% to $2.4 billion. Seven provinces registered declines, with Ontario being the main contributor to the decrease.