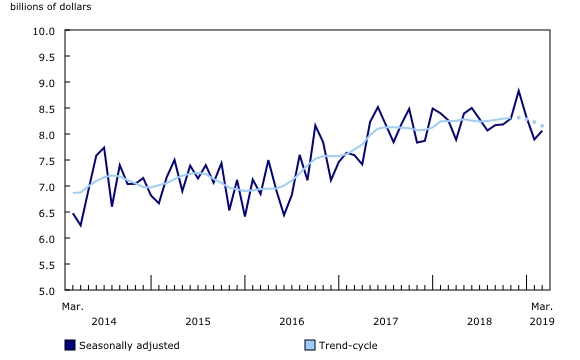 May 23, 2019 – Canadian municipalities issued $8.1 billion worth of building permits in March, up 2.1% from February. The increase was attributable to higher construction intentions in Western Canada.

Building permits up in Western Canada, down east of Manitoba
Four provinces reported increases in March, led by British Columbia with an increase of 12.8% (+$180 million). Meanwhile, all provinces east of Manitoba reported declines. The largest decrease was in Ontario, down 1.4% (-$43 million) due to lower construction intentions in the residential sector.

The value of single-family permits declines in the residential sector
Municipalities issued $4.8 billion worth of residential permits in March, down 1.5% from February. The decline was largely attributable to lower construction intentions in Ontario (-$102 million) and Quebec (-$99 million).

The value of single-family dwelling permits was down 5.0% (-$108 million) from the previous month. Seven provinces reported declines, with the largest decrease in Ontario (-$58 million).

First quarter 2019: Permits down sharply in Alberta year over year
Municipalities issued $24.3 billion worth of permits in the first quarter, down 3.5% (-$877 million) compared with the same quarter last year. Five provinces posted declines, with the majority of the decrease coming from Alberta (-$1.0 billion).

Every component was down in Alberta in the first quarter compared with the same quarter last year. Single-family construction accounted for approximately half of the provincial decline (-$539 million). This was the lowest value for single-family dwelling permits since the first quarter of 2009.

Meanwhile, in Quebec, the value of permits rose 2.1% (+$105 million) year over year in the first quarter. Every component except multi-family dwellings was up. The increase was largely the result of higher construction intentions for non-residential buildings.