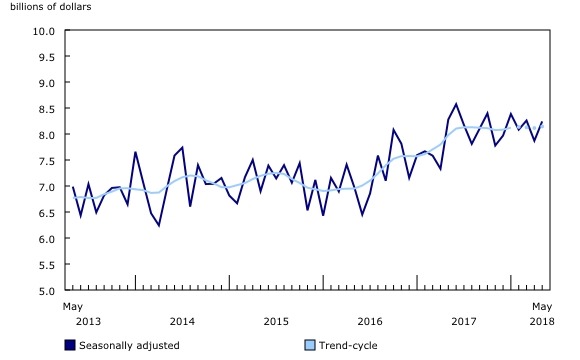 July 19, 2018 – The value of permits issued by Canadian municipalities increased 4.7% to $8.2 billion in May. This followed a 4.7% drop in April, the only month this year where municipalities reported a total value below the $8.0 billion mark.

Residential sector: Multi-family dwellings reach record high
In the residential sector, municipalities issued $5.5 billion worth of permits in May, up 7.7% from April. This was the second-highest value on record, following the $5.7 billion worth of permits issued in October 2016. Five provinces posted increases, with Ontario and British Columbia reporting the largest gains.

The multi-family dwelling component reached a record high in May, with municipalities issuing $3.1 billion worth of building permits. The increase was the result of higher construction intentions in British Columbia, Ontario and Alberta.

The value of single-family dwelling permits also rose in May, up 6.2% from the previous month to $2.5 billion. This was the first increase following four consecutive monthly declines. Ontario led the seven provinces that registered increases.

Provinces and census metropolitan areas: Ontario and British Columbia register largest increases
The total value of building permits was up in five provinces in May, led by Ontario and British Columbia. Yukon also posted a notable gain. The value of building permits grew in 16 of 36 census metropolitan areas (CMAs), with the Toronto CMA reporting the largest increase (+$473 million).

The value of permits in Ontario rose 12.0% in May to $3.3 billion. Increases were reported in every component except industrial buildings. The value of building permits in the CMA of Toronto rose 37.9% to $1.7 billion, following three monthly declines. The gain was the result of higher construction intentions for residential dwellings. Toronto approved the construction of 3,562 multi-family dwelling units, the largest monthly total since August 2015.

British Columbia issued $1.5 billion worth of building permits in May (+18.4%). The increase was the result of higher construction intentions for multi-family dwellings in the CMA of Vancouver.

Yukon reported a large increase in May (+$17 million). Municipalities issued $19 million worth of building permits, with over 90% of the value stemming from residential construction. The gain was mainly attributable to the issuance of multiple permits for a large apartment-condominium project.

In contrast, Quebec posted an 11.4% decline in May to $1.6 billion. The decrease stemmed from lower construction intentions for multi-family dwellings and commercial buildings. The value of permits issued in the CMA of Montréal was down 20.1% in May, following a strong April where $1.1 billion worth of permits were issued.