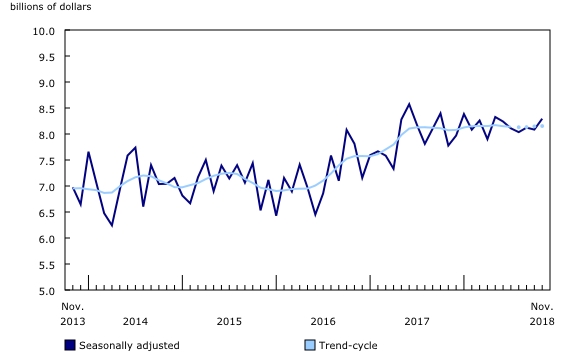 Jan. 10, 2019 – Canadian municipalities issued $8.3 billion worth of building permits in November, up 2.6% from October. Higher construction intentions for commercial buildings drove most of the gain.

Residential sector: Single-family dwellings post the largest decline
In the residential sector, the value of building permits decreased 2.5% to $5.0 billion in November. There were declines in five provinces, most notably Ontario. Meanwhile, the largest gain was in Quebec.

The value of single-family permits fell 5.5% to $2.2 billion in November, after increasing 4.7% the previous month. Ontario reported the largest decline (-8.1% to $930 million)—the lowest reported value since January 2016.

In the multi-family dwelling component, municipalities issued $2.9 billion worth of building permits in November, edging down 0.1% from October. Ontario reported the largest decrease (-$232 million), which was largely offset by a $204 million gain in Quebec.

In British Columbia, the value of permits rose 14.3% to $1.7 billion. The commercial component posted the highest value on record, driven by a $240 million permit for an office building in the  of Vancouver.

The value of building permits in Quebec was up 13.9% to $1.8 billion in November, following a decrease of 14.9% the previous month. The increase was largely the result of the issuance of high-value permits for large apartment buildings in the  of Montréal and a record high for commercial permits in the  of Québec.

In Alberta, the value of building permits increased 10.4% to $1.1 billion. The gain was largely driven by the  of Calgary (+$131 million), where every component, except for industrial buildings, reported an increase.

In contrast, the value of building permits in Ontario was down 10.3% to $3.0 billion, following an increase of 9.0% in October. The value of permits in the  of Toronto dropped 17.4% to $1.5 billion in November. The decrease in multi-family dwellings (-$225 million) was the main contributor to the decline. Despite the decrease in November, the year-to-date value in the Toronto  for multi-family permits ($6.8 billion) has surpassed the total value for 2017 by 20.2%.