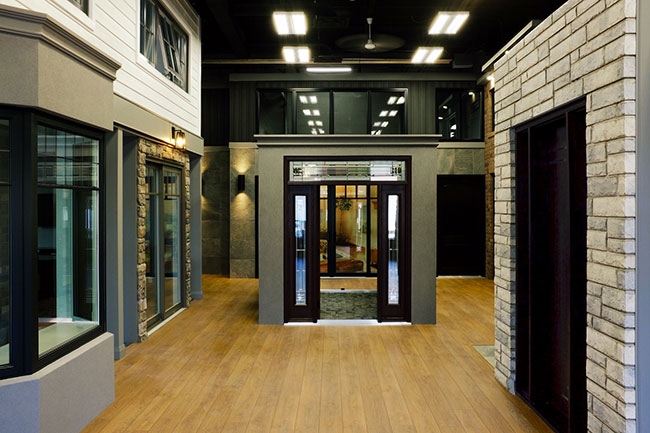 Kempenfelt’s showroom design took in the realities of its target market, where suburban inside/outside lifestyles meet urban influence from Toronto. An architect helped.

In a business era that has manufacturers vertically integrating their sales model, it might seem counterproductive for a manufacturer to focus on the window and door dealer, but in the case of Euro Vinyl Windows of Woodbridge Ont., that’s precisely what they did with Kempenfelt Windows of Barrie, Ont.

Early in the planning stages of their recent expansion, Rob Maslen, owner of Kempenfelt Windows, worked with key suppliers to formulate a model and product offering that best represented the new market they had planned to venture further into. “We wanted to be sure our suppliers were on board with this move,” says Maslen. He polled his key suppliers for their support. “Much like our philosophy is to go above and beyond for our customers, I wanted the same from our key suppliers.” With their solid track record over the past 20 years, Kempenfelt’s suppliers were quick to jump on board.

Kempenfelt had been serving the Newmarket area, which is 50 kilometres south of the main Barrie showroom. However, it had not had a showroom dedicated to this town. Prior to doing so, Maslen did extensive research. “We looked into city development plans for the next 20 years, asking what the key demographics are, where the housing market trends have been and what the projections were for the future.”

With MoneySense magazine ranking Newmarket 10th out of 200 cities in Canada, and fourth out of the top 10 small cities in Canada in its “Canada’s Best Places to Live” in 2013, Maslen knew it was a market he could comfortably tackle. He understood well not only the clientele he was serving, but the unique construction of suburban homes in Newmarket. “It’s not to say the builds in Newmarket were too different from the rest of the province,” says Maslen, “but we just understood very well the windows and doors we are replacing and made sure we are able to offer our clients options that work.” Newmarket is a thriving community with small town charm and big city access. It is framed by major highways and efficient public transit lines, making it an ideal home for many commuters to and from Toronto. Population has doubled in 25 years, housing prices have increased by 13 to 20 per cent every year since 2010 and the average household income exceeds provincial averages. On paper, it’s a good market. The reality is, this is an area with heavy influence from metropolitan Toronto and most of the suppliers and trades working on Newmarket homes are coming up from the city. Kempenfelt’s Newmarket showroom needed to align with the local community standards and their aesthetic.

With that information, Kempenfelt set out to become a permanent fixture in the community with a new showroom that reflected the look and feel of the homes they were to transform, but Maslen knew he needed some help to achieve that goal. The Newmarket showroom required careful design to ensure it resonates with this bustling community.

Stamp Architecture, a Toronto-based firm specializing in residential design, was contacted by Kempenfelt Windows to help with the design of its new showroom. Brad Netkin, principal architect of Stamp, met the project with enthusiasm and felt very comfortable with the proposal to assist in the design of the new space from the onset. Although retail showrooms were a departure from his typical projects, Netkin related well to his new clients and the products he was asked to showcase. “Rob was very open-minded to the design process and had the will to explore options,” says Netkin. “First I had to establish the inventory Kempenfelt wanted to showcase and from there it was how to best work it into the space and create an environment that appealed to the demographics.” Netkin has designed and built commercial, residential and mixed-use environments, which has naturally included the sourcing of building materials. Stamp has incorporated EVW products in multiple projects and knew how to design an environment which allowed visitors to Kempenfelt’s Newmarket space to see and relate with products on display. Considerations included the sizes, colours and configurations of windows and doors on display. This was carefully detailed through collaborative efforts of EVW, Kempenfelt and Stamp over series of on-site meetings. Each window and door unit would replicate similar dimensions and finishes of the area homes, including the scale of ceiling height and floor space. The final design showcases the improvement new windows and doors can make in a Newmarket home.

A notable component was designed to inspire homeowners to blend their indoor and outdoor living. An admirable feature of Newmarket residences is the generous amount of property which comes with a typical home. When visiting this area, it is quickly apparent that landscaping is a reflection of just how serious local homeowners are about enjoying their property. Along the back wall of the showroom is a 16-foot-wide bi-parting door, finished with sleek black frames and a low-profile sill. This sliding glass door showcases what an addition of a large open passage can do to for a transitional space.

Kempenfelt’s showroom design took in the realities of its target market, where suburban inside/outside lifestyles meet urban influence from Toronto. An architect helped.

In the window and door industry, it is no secret that entry door options are exhaustingly vast, which can easily create an overwhelming experience. A home’s front entry is the first impression and it’s one of the few elements that can translate a homeowners personal taste from both exterior and interior perspectives. This can be a costly and important decision to make. Kempenfelt wanted to create spaces within the showroom to allow full vantage points for their doors so that a decision can be easily made. There is an area in the showroom called “the townhouses” which includes entry systems in various colours and finishes complimenting modern through to traditional designs, all in a harmonious space. This area showcases the principle that individual taste can differ from one home to another while still complimenting the architecture. The design was collaborative, well thought-out and meticulously executed for the intended purpose. It has been a journey that reinforced the relationship between Kempenfelt and EVW.

The B2B relationship in our industry between manufacturers and dealers tends to be a fickle one. Perhaps this is why manufacturers are opting to sell direct, avoiding the potential of being dumped and replaced. There are a few long-term relationships in the window industry that run smoothly with known commitments. The alternative has been a business relationship that does not translate into long-term partnerships. This may be due to logistics, pricing, product selection or even personnel. That said, when it clicks, the dealer/manufacturer dynamic is a good connection and tends to have longevity. This is the type of relationship that is to be nurtured, as it is rare and valuable. This has been case between Euro Vinyl Windows and Kempenfelt Windows and Doors.

History of a relationship
The first time Maslen arrived at EVW he confidently voiced that Kempenfelt was going to be Euro’s largest dealer. This is a familiar tune in the B2B world, as it’s been sung before by many ambitious entrepreneurs. That said, this time it became a reality and has flourished for over 16 years. With both companies working together in ensuring continued and sustainable growth, it has been discovered that a good breakfast is key. Often the EVW and Kempefelt team will meet for a 7 a.m. coffee-and-eggs meeting. It’s a simple formula: meet, order quasi-healthy breakfast plates and chat. The discussion varies from current projects, industry gossip, family life and always, new ideas. Not every idea unfolds to reality, however there have been good strides in marketing campaigns, product enhancements and market research. This has most evident in the collaborative efforts for a reinvented showroom experience for Newmarket.

According to Merriam-Webster, the verb “reinvent” means  “to make as if for the first time something already invented; to remake or redo completely; or to bring into use again.” The client experience should be one of ease and comfort, as there shouldn’t be a specific component of the showroom visit that is glaring or unusual. This is precisely what good design emulates, and with that, the new showroom is a model of success.