Sunview Patio Doors has equipped itself for the future. 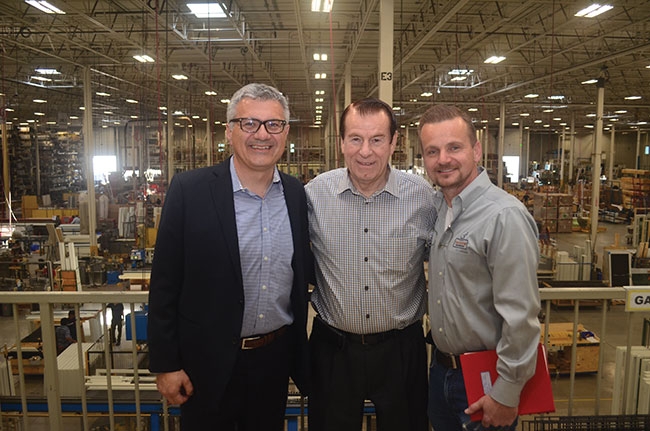 Sunview Patio Doors has come a long way since it first opened up shop in 1978. This is most apparent, when you step onto the company’s manufacturing floor at 500 Zenway Boulevard in Woodbridge, Ont.

As you walk around the extremely clean and well-organized plant floor, you are greeted by several pieces of technology not typically found in the manufacturing of patio doors. As I walked up to the end of an assembly line I was greeted by a state-of-the-art Clearpath AGV (automated guided vehicle) that picked up an order of patio doors at the end of the assembly line, then made its way to the recently built automated storage retrieval system (ASRS) at the other end of the plant. I followed the AGV, watching as it used laser radar (LiDAR, the same technology used in self-driving cars) to scan for any potential obstacles in its path. Whenever an obstacle was detected – an employee, a forklift, or a skid of product, for example – the AGV would stop for a few seconds, re-program its path and continue on its way until it reached its destination. As someone who spent a significant portion of his youth in warehouses and factories working as a shipper, receiver and order picker, I found this fascinating to watch.

“We don’t want to have anyone in the operation move more than one metre [away from their work area],” explains Tony Margiotta, president of Sunview Patio Doors, as he walked me through a tour of the facility, explaining that the AGV has significantly improved efficiencies and safety at the plant.

This particular AGV was selected due to its ability to adapt to its surroundings without needing to be re-programmed, and because it did not require any fixed infrastructure be set in place, such as having magnetic strips laid out on the floor throughout the warehouse to guide the machine.

“We didn’t want to pigeonhole ourselves if something changes,” Margiotta explains.

And things these days certainly change at a feverish pace, particularly when it comes to the latest available technologies. Being a leader in the use of the latest technologies is something Vic De Zen, chairman and founder of the Vision Group of Companies, Sunview Patio Doors’ parent company, is extremely passionate about.

“You need to invest money and resources to keep a business going,” De Zen says. “This year we look to invest $40 million.”

A stacked system
The AGV isn’t the only area where De Zen has invested significantly in Sunview. With the company’s new automated storage retrieval system up and running (full commissioning will take place in July), the combination of the two technologies will create huge logistics efficiencies for the company. The ASRS allows for the automated loading of finished products into a three-level racking system, which can store products based on their expected shipping dates and then move them directly in front of the appropriate loading docks for quick and easy transport into trailers. For quick identification purposes, all products entering the ASRS are barcoded and RFID tagged (radio frequency identification).

“Vic always pushes us to be at the forefront,” says Kurt Oberparleiter, vice-president of operations, who adds that the ASRS system is a dramatic change from how things were stored even a few years ago. “Three years ago, all this product was on the floor. The busier we got, the more disorganized we got.”

During busy times, products often had to be “dug out” of areas via forklifts, wasting time and manpower, during the shipping process. The ASRS has made this issue a thing of the past.

“Whatever is shipping tomorrow is set up in our system and ready to go in order,” Oberparleiter explains.

Nowadays, if a product doesn’t move exactly as scheduled – which can be the case when dealing with larger construction projects where delays are common for a variety of reasons – it can sit well out of the way of the production and shipping areas for transport at a later date.

The majority of ASRS systems are designed using standard-sized storage slots, but since patio doors aren’t built to fit in a standard palletized racking system, a custom-built system was necessary for Sunview. To ensure the investment pays off for years to come, a lot of long-term planning was done when creating the system.

“We can keep expanding the system,” Oberparleiter says, adding that his company made sure there would be additional space to grow the system in the future. “We don’t want to become inflexible with our automation.”

And based on the way sales have been going, growth should probably be expected. The company has more than tripled its sales since De Zen acquired it in 2008. In that same time production and warehousing space has expanded from 120,000 to 210,000 square feet. The company currently employs approximately 205 people with 150 of the employees working on the plant floor.

Sunview has also invested in Yaskawa robots that are specified and programmed to perform repetitive and/or heavy tasks previously performed by humans.

“The current robot is used to lift mechanical frame components from a work-in-progress cart into an adjustable fixture,” Oberparleiter says. “Automatic screw machines then drive the framing fasteners into position to complete the frame. The Yaskawa saves a worker from lifting the frame parts, thereby reducing effort and improving production flow.”

Lighting the way
De Zen doesn’t just try and keep at the forefront of the latest technologies for improving efficiencies within his operations, he also invests in research and development to ensure he can offer his customers the most state-of-the-art products. One example is Sunview’s new award-winning Leggera Glass Wall System.

The company’s latest creation has done away with rollers and track systems through the use of a patented magnetic levitation technology, which allows for frictionless movement of panels weighing more than 1,000 pounds, which means the size and thickness of available patio doors has changed dramatically. The permanent magnets used to move the doors come with a 400-year lifespan.

The Leggera (the Italian word for light) features an R-factor insulation rating of R15, no matter the outside climate (Sunview is currently looking at reaching an R18 rating). It can be configured for ADA (Americans with Disabilities Act)-compliant applications; offers minimal sightlines for more glass and less frame; and won U.S. awards for innovation in 2018. Sunview installed the first Leggera this past winter in King City, Ont.

Offering the latest and greatest innovations is a huge part of doing battle in the extremely competitive U.S. marketplace.

“We’re competing with the U.S. and China,” De Zen says. “You have to deal with the Americans.”

“With ‘Buy American,’ you have to offer great products. You need a strong value proposition. You have to be better than everyone else,” Margiotta says. “Otherwise, they’ll just buy local.”

Innovative culture
Margiotta says that Sunview encourages a culture of innovation from the top down.

Margiotta says they would rather try something once and have it not work than sit on an idea and watch a competitor bring it to market.

“The last thing we want to find out is that our competition or someone else has come up with something and we thought about that 10 years ago but we never put any effort to it,” he says. “It’s like Vic says: we never sleep. This is not the kind of company to let you sleep, you’ve got to move.”

Two factors that have helped keep Sunview producing innovative technologies are its close connection to its customers, to ensure they know what they’re looking for in terms of new products and features and a highly skilled workforce that is given the opportunity to try to make things better at all levels.

“You have to create that culture where you’re rewarded to take a chance sometimes, right?” Margiotta says. “You’ve got to give the guys room to try.”

Oberparleiter says being in the Toronto area offers a huge advantage in terms of quality of workforce.

“We get people coming in that might not even be given a shot in a different company,” he says. “And they’re smart, they have great ideas, they’re energetic, and you let them loose a little bit. And all of a sudden, you’re amazed.”

“Some of the best people we have here came from out of the shipping department,” Margiotta adds. “You know when you’ve been talking to your taxicab driver and they say they used to be an engineer back home? We’ve hired a few of those people, and these guys have been amazing. We’ve got some stars that came out of that.”

“Stay tuned, this is all just Phase 1 of this big journey,” Margiotta says, without giving much away about the company’s future plans. “Phase 2 will be coming soon.”