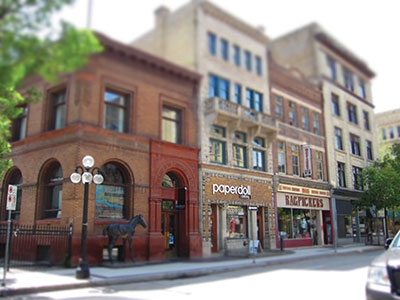 The iconic Exchange District, with its rows of pubs, bars, nightclubs and restaurants, will present a number of entertaining diversions to Fenestration Canada members.

The Canadian fenestration industry has enjoyed productive times in many locations around the country over the years, but none to match this summer at Fenestration Valley in Winnipeg.

Fenestration Canada’s Annual General Meeting, taking place June 11 to 14 in Manitoba’s Fenestration Valley will showcase unique technological breakthroughs such as high-performance insulating glass and window frames. Attendees will be able to keep involved with the exciting progressions of the window and door manufacturing industry between important meetings about technical details, code discussions and new products. Members will be invigorated working in committees such as the Fabricators’ Council, Technical and Marketing on issues that are critical to the health of our industry. In this mix of suppliers and fabricators attendees will advance their businesses and learn about what’s on the horizon.

This year, much more intensive involvement by Fenestration Manitoba, Fenestration B.C. and the AVFQ will add to the mix, bringing insights into key developments, such as varying energy codes, in other parts of Canada.

It all starts with arrival at the new James Armstrong Richardson International Airport, recognized as one of the top 10 airports in the world. Renowned architect César Pelli (who designed the Petronas Towers in Malaysia and the International Financial Centre in Hong Kong) drew his inspiration from the vast prairies and sky when he conceived this, the first freestanding airport building in Canada that is LEED-certified. Skylights, an atrium and large windows bring the big brilliant sky indoors, filling the space with light and working with smart mechanical systems to reduce energy consumption.

Attendees should reserve early enough to take a place in the historic Fort Garry Hotel, which has been upgraded to incorporate a superb spa and conference centre while maintaining all of its original grace and grandeur. The Fort Garry Hotel is just across the street from The Forks, Winnipeg’s bustling bazaar and entertainment centre and site of the Canadian Museum for Human Rights. A short walk across the famous Esplande Riel Pedestrian Bridge is St. Boniface, Winnipeg’s French Quarter and a Canadian must-see. Also just a few blocks away, the Exchange District is a hub of Winnipeg’s famously robust arts and entertainment industry.

AGM 2014 has a lineup of activities that will ensure the entire event is one to remember. Extracurricular activity kicks off with a first-ever joint golf event at the Rossmere Golf and Country Club, pitting Fenestration Manitoba against AGM registered attendees. Rossmere welcomes players of all abilities with its 6,400 yards of rolling fairways, lush greens and wide-open beauty. The first hole is one of the best in Winnipeg, while the 11th hole is generally considered the toughest par four in all of Manitoba.

National and local suppliers are encouraged to “triple up” on networking within Fenestration Valley and spend time with delegates while taking the opportunity to visit nearby manufacturing facilities. FenMan will also host the Leading Edge product and service display and interaction centre.

Executive director Robert Rivard has arranged a dinner outing at historic Fort Gibraltar in St. Boniface, with the challenge to vie for prizes in the infamous ax-throwing contest. Fort Gibraltar will take you back 200 years, to the voyageurs and the fur trade, with its living history museum and interactive guided tours. Costumed interpreters relive the daily life of 1815 as you visit significant buildings in the fort such as the blacksmith shop, the winterer’s cabin and the trading post.

Plan to keep your energy up to travel to the real Gateway to the West, the Exchange District, an atmospheric scene of nightspots where the camaraderie of the AGM will certainly carry on well into the night. Nightlife ranges from the youthful Whiskey Dix on Main Street to the more relaxed Sensi Wine Lounge above Tre Visi restaurant and the Exchange-centered Peasant Cookery bar with its late night snack of tourtière.

While you are busy with meetings, your companion will have a number of active and intriguing choices for fun. FenMan has plans for jogging or cycling on the leafy trails and streets along the river, or a combination of spa luxuries and yoga at the hotel.

Winnipeg is a quiet gem of outstanding architecture. Your companion will be able to sneak a peek at the iconic Canadian Museum for Human Rights, just before its grand opening later in the summer. Architect Antoine Preddock describes his vision as “rooted in humanity, making visible in the architecture the fundamental commonality of humankind – a symbolic apparition of ice, clouds and stone set in a field of sweet grass. Carved into the earth and dissolving into the sky on the Winnipeg horizon, the abstract ephemeral wings of a white dove embrace a mythic stone mountain of 450 million year old Tyndall limestone in the creation of a unifying and timeless landmark for all nations and cultures of the world.”

Yet another option is the unique Hermetic Tour of the Manitoba Legislative Building, which unravels some of the mystical secrets encoded in the building’s grand architecture including hidden hieroglyphic inscriptions, numerological codes and Freemasonic symbols so intelligently masked they have escaped historians and visitors for nearly 100 years. You and your companion will also be given a chance to see the Exchange District by day, with a highly informative guide to the unique architectural details of one of North America’s largest warehouse districts.

Consider, as well, the exceptional opportunity to enjoy the Winnipeg International Jazz Festival, just beginning mid-week in the Exchange District. This year marks the 25th anniversary of the festival, when the world’s best jazz, blues and urban artists converge on downtown Winnipeg. The creative work of Winnipeg’s vibrant design community is on display in the midst of this event at the Cube, the kind of innovative outdoor stage that flourishes so well in Winnipeg.

All of the AGM conference program, online registration and room reservations are available on the main Fenestration Canada website at fenestrationcanada.ca

Think previous Fenestration Canada AGMs have been fun and worthwhile? You ain’t seen nothin’ yet!