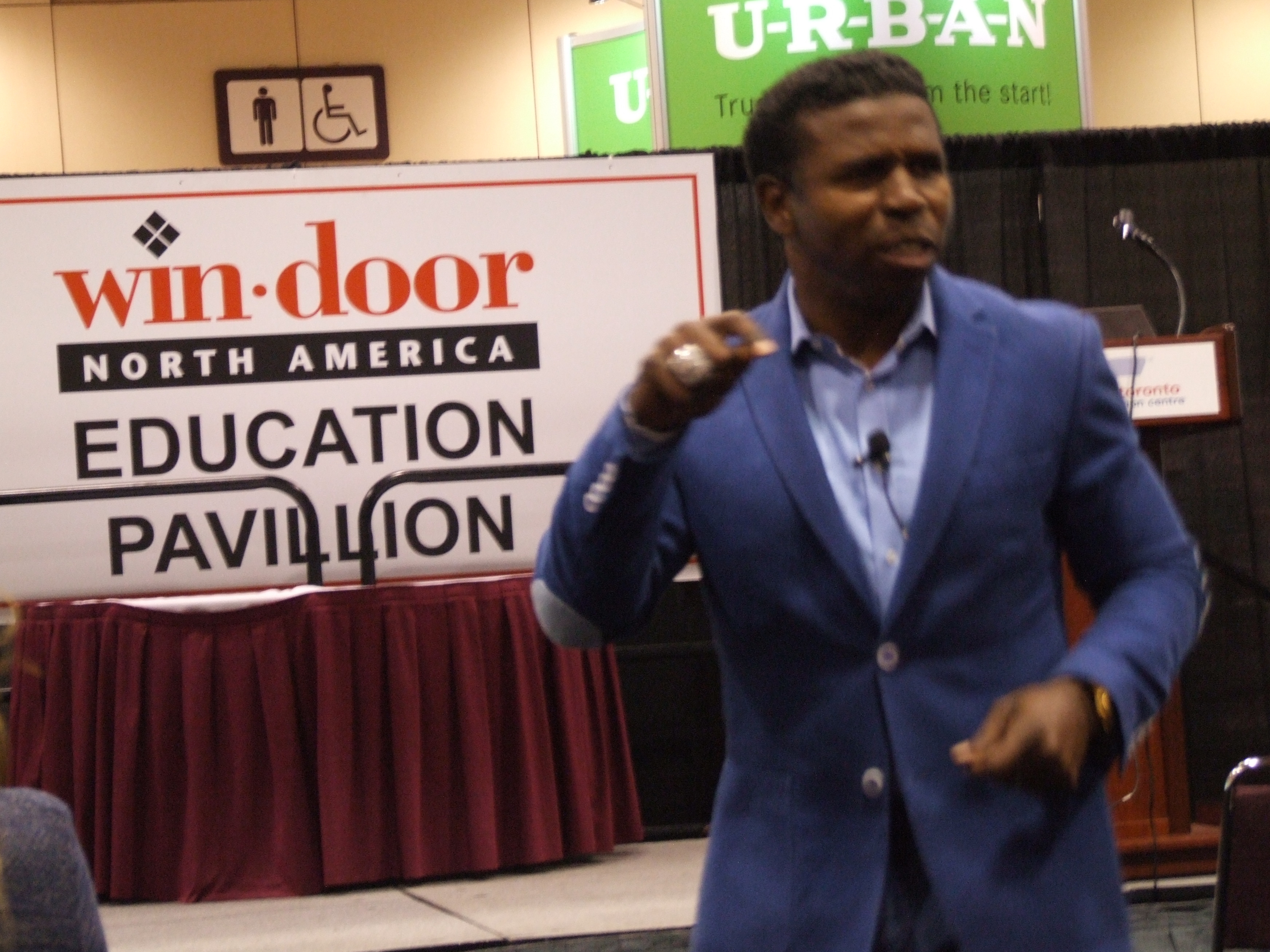 Seems like just about every booth had something new to talk about at this year’s Windoor. Show organizers encouraged manufacturers to bring their most innovative recent inventions and exhibitors responded with many products they had not even produced literature for yet. These products were featured in a permanent Innovation Showcase area, and in 10-minute speeches the exhibitors gave after the keynote speech on the opening evening. Interesting new products included window latches with integrated tilt latches; vent extensions for storm door lites; new tapes, sealants and foams that perform better than anything previous; in-glass blind systems; a number of new fibreglass door designs; reinforced PVC mull posts; retracting screens and a low-cost manual multipoint hardware station.

Another new twist to the show was the keynote speaker who kicked off the program on the Tuesday afternoon. Instead of a dry technical presentation, Argos football great Michael “Pinball” Clemons revved up the crowd with an amazing display of pure positive energy. Whether standing on chairs, leading the crowd in chants and cheers or violating attendees’ personal spaces, Clemons’ enthusiasm proved irresistible. His message was focus on the family and finding your “sweet spot” for success by refusing to let adversity get you down.

Clemons appeared at four in the afternoon before the show floor opened, marking just one of several organizational changes to this year’s show. The show was moved to a slightly smaller hall next door to its usual location, making everything feel more intimate and allowing organizers to move the eating area off to a side room, eliminating the giant “cafeteria” that hollowed out the middle of past floors. The lecture theatre and innovation pavilion were placed in the middle instead, making them more inviting to attendees strolling past. And the show ended at 1 p.m. on the final day, helping exhibitors and attendees alike avoid the horrors of rush hour on the Gardiner. Most comments from the floor were in support of the changes, though some felt the noise from the lecture hall was intrusive and the innovation presentations seemed to have some difficulty competing with the free drink carts circulating at the same time. Show organizers are promising ongoing adjustments to the experience, or possibly even major changes in the years ahead.

Warren Jestin, chief economist at Scotiabank, imparted some critical economic data to attendees healthy enough to get to the show for the 8 a.m. breakfast on the Thursday. He said Canada’s economy is in for another shift in regional power, as low oil prices drive Alberta and Saskatchewan into recession and boost manufacturing in Ontario, Quebec and B.C. He predicts no major rise in interest rates in the next year due to concerns over the house price “bubble,” though he notes the predicted correction to Canadian housing prices always seems to be just around the corner and never actually comes. The U.S., he said, is becoming the favourite target of global investment again as American consumers recover from their Great Recession swoon and start satisfying their pent-up demand from the last five years. Weak oil has negative long-term effects for Canada, he said, as one third of all business investment in Canada is in the energy sector. Jestin also said federal and provincial governments are well-positioned to keep their infrastructure spending promises as deficits are mostly under control.

Technical presentations included discussions of the North American Fenestration Standard (NAFS), how to hire and retain Millennials and updates on national building codes and Energy Star.

More photos from the show are available on the Fenestration Review Facebook page.