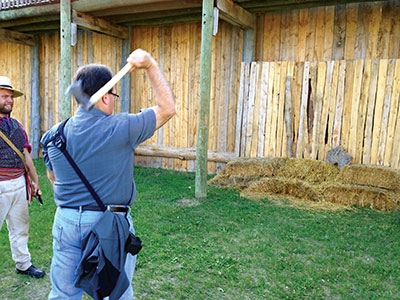 Look out log! Axe throwing was a popular activity at Fort Gibraltar, a pioneer-era village where delegates met for dinner.

Now it can be said: there was skepticism when Fenestration Canada told its membership it was holding its 2014 Annual General Meeting in Winnipeg, Man. – purported home of arctic weather and mosquitoes the size of small birds. At best, there was concern that the event would not see the numbers present at the tremendously successful AGM in St. John’s, N.L., the previous year. But thanks to the tireless efforts of master promoter Al Dueck, of Duxton Windows, Winnipeg went down as an equally great success, attracting record numbers of attendees and putting smiles on everyone’s faces through excellent education sessions, accommodations and entertainment options. Even the weather co-operated.

The four-day event took place June 11 through 14 at the historic Fort Garry hotel in downtown Winnipeg. Organizers reported 185 delegates – about the same as St. John’s, but with fewer companions and therefore more actual business owners. Remarkable in that number was the number of window and door fabricators: 35, including 11 from Manitoba representing around half the total in the province.

The schedule was a little different from past AGMs, in that Fenestration Manitoba held its golf tournament prior to the start of the conference on June 11, in lieu of the usual Saturday Fenestration Canada golf.

There was a meeting of the new Fabricators Council on June 12, the first such meeting held at a Fenestration Canada AGM. It was followed by a Fabricators Round Table working lunch where the fabricator-only group was challenged to come up with questions and challenges about NAFS by the moderator, J.F. Kogosevek. Both meetings saw a lot of spirited discussion around such issues as labelling enforcement and installation practices.

Thursday ended with dinner at Fort Gibraltar, a pioneer-era village complete with palisade, blacksmith, log cabins and girls in bonnets. Delegates tried their hands at axe-throwing, with most finding it deceptively difficult. Heather Arntson, attending with Mike Arntson of Cardinal, proved the most dangerous axe-thrower, burying all three of her initial shots.

Friday, June 13, saw a jam-packed education schedule. Prominent throughout the day was Murray Frank of Constructive Home Solutions, a B.C. building engineer with extensive experience with that province’s code development process. Frank presented no fewer than four seminars through the day, discussing various elements of window and door construction and installation and how they relate to B.C. codes. Another “B.C.er,” Al Jaugelis of RDH Building Engineering, presented the Technical Committee’s latest draft of labelling guidelines for NAFS compliance. Jeff Baker gave his usual excellent look at codes across the country, with discussion of enforcement in various jurisdictions. Steve Hopwood joined the conference by phone to present the Energy Star update. And Tom Akerstream of Manitoba Hydro gave a fascinating case study of the engineering behind Manitoba Hydro Place, the utility’s headquarters opened in 2009. It is one of Canada’s only LEED Platinum buildings, and stands many assumptions about energy efficient construction on their heads. All seminar presentations are available to Fenestration Canada members at the Member’s Portal on the Fenestration Canada website.

After the Friday seminars, delegates put on some better clothes and gathered at the sponsors’ tabletop displays for drinks and conversation with the various supplier sponsors. Then it was off to the President’s Dinner in the Fort Garry’s elegant Provencher Ballroom. Manitoba lieutenant governor, Phillip Lee, was in attendance along with his aide in full military uniform, adding a touch of pomp and circumstance to the event. After dinner, the location for the 2015 AGM was announced: Vancouver, B.C. Then it was time to present the C.P. Loewen award for lifetime achievement. The award went to Bill Fast, formerly of Willmar Windows. The C.P. Loewen award has special significance in Manitoba, where Cornie Loewen was a personal friend to many in the local industry. Dueck, who worked for Fast at one time, presented the award.

Saturday opened with Rod Smith of the Duha Group explaining how his company – a paint pigment supplier ¬ became a leader in Continuous Improvement and gave delegates some solid advice on how to apply Continuous Improvement strategies in their organizations. He was followed by Wade Miller, president of the Winnipeg Blue Bombers, who was fresh from his son’s baseball practice. Miller talked leadership and drew from his experiences both as an entrepreneur with Pinnacle Staffing and in taking over a CFL team on very short notice. Miller’s common sense observations and direct style touched a nerve with the attending delegates and some good discussions ensued.

General feedback from delegates was excellent, with many reporting new contacts and business opportunities. All in all, it can be said that Winnipeg came as a pleasant surprise.

You can check out all the photos from Winnipeg on the Fenestration Review Facebook page.