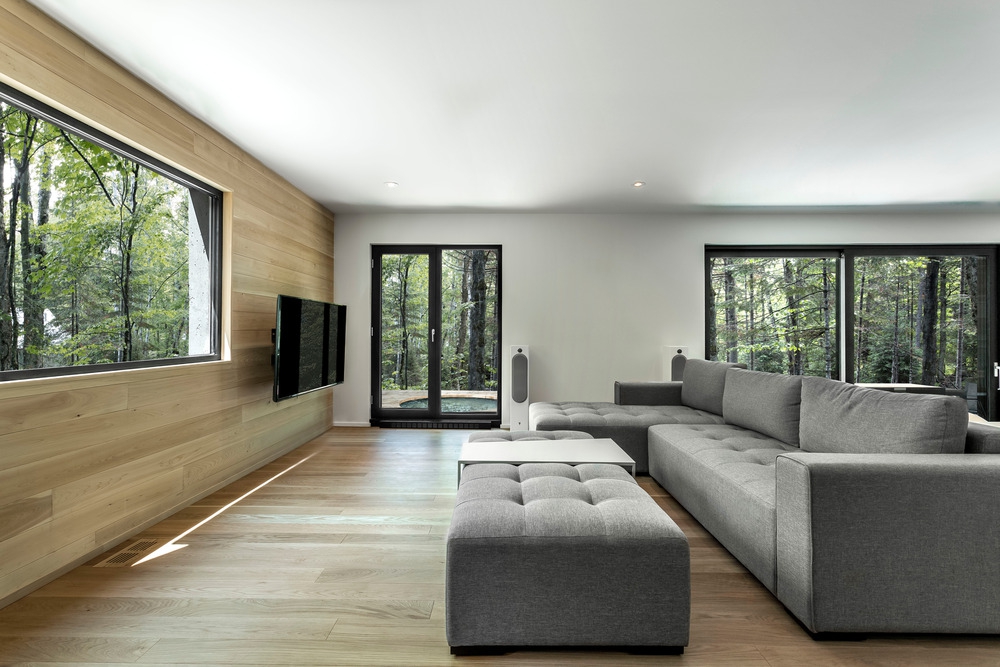 July 23, 2015 – On the banks of Lac Supérieur, just 90 minutes north of Montreal (Quebec), a mountain that was once the property of a former religious congregation now houses a creative and innovative model for integrating contemporary architecture in a natural environment.

Located on the north side of the Mont-Tremblant ski resort, in the Laurentians touristic region, the Fraternité-sur-Lac resort site values human experience above all else. In 2012, its developers entrusted Montreal studio YH2 with the challenge of creating a series of modern residences that would be integrated to the natural environment – hence targeting a new generation of homeowners who are sensitive to design, architecture and new standards with regards to interior and exterior developments. This approach marks a clear shift away from traditional log lodges, the mythical Canadian cabin or plywood-heavy alpine cottages surrounded by boutiques.

By signing on to a real estate project for the very first time, the YH2 team first conceived Spahaus, which focuses on horizontal housing, a marriage of wood and concrete, panoramic vistas and an outdoor spa. A series of Trihaus – a big brother to Spahaus – then rapidly followed, with its three-storey vertical design overlooking a terrace, providing owners with the feeling of living amidst the trees. This cluster of secondary homes aims to preserve the site’s natural state, including the original trees, a river and trails leading to Lac Supérieur and the Club de la Pointe, an open-air playground laid out on the shores of the aforementioned lake, where motorized vessels are forbidden.

Since setting up shop in Montreal’s Little Italy neighbourhood nearly 20 years ago, Loukas Yiacouvakis and Marie-Claude Hamelin have given life to many distinctive residential and commercial projects that have attracted attention both in Canada and around the world. For Yiacouvakis, his team’s utmost priority is to democratize access to architecture. “I believe it is in everyone’s best interest to democratize the work we carry out,” he explains. “We aim to deliver carefully thought-out residences, but even more importantly, to send out a clear message that architecture doesn’t merely cater to a privileged minority.”

Therefore, YH2 is always on the hunt for the best playing surface in a natural environment where it can integrate projects that are inspiring, functional and affordable. “I believe that a secondary residence should allow for a deep-rooted connection with nature and the surrounding landscapes, all the while offering a living space wherein one feels entirely comfortable with oneself and with others,” Yiacouvakis points out.

The ready-to-live in the mountains

YH2 and Fraternité-sur-Lac’s concerted vision translated into an approach Yiacouvakis describes as “ready-to-live”, comparable to the ready-to-wear lines devised in the 1960s by haute couture fashion houses. “Until now, our practice has mainly been dedicated to architectural design for specific clients – custom-built homes that can pride themselves on a privileged rapport with the natural environment they integrate. With the Spahaus and Trihaus projects, we are working in collaboration with Fraternité developers to establish an assortment of properties in nature that are flexible and maintenance-free. This collection of residences was designed for this particular mountain site, by rolling out a variety of different models that serve as a bona fide, alfresco art collection.”

This approach is not to be confused with factory-built housing, which may be attractive to some, but is conceived without regard to ground unevenness, natural layout, vistas or the alignment of developments with human experience. “To us, factory-built housing has no place in nature, given that the proposition wholly ignores the land on which it is built. The construction of a factory-built home requires significant deforestation just to set up the different prefabricated elements, delivered by way of heavy machinery, rendering the possibility of an intimate rapport between architecture and nature impossible,” Yiacouvakis explains.

As a further illustration of this point, Spahaus units blend into the naturally undulating contours of the mountain, with each residence positioned to keep other chalets out of sight, as if they were laid out on the steps of a staircase. With a large window design in front, the ground floor’s concrete structure welcomes a wooden playhouse (that can accommodate a green terrace), which constitutes an additional room on the second floor. What we’re witnessing here is the merging of the “tiny house” with the thinking that goes into a modern, functional space. Inaugurated in the spring of 2015, these 21 Spahaus units have nearly all found takers already, while the Trihaus generate a similar brand of enthusiasm.

An $80 million investment in nature

Having grown organically since 2005, Fraternité-sur-Lac constitutes an economic hub in the Laurentians, with a long-term total investment of $80 million, including: the layout of the Club de la Pointe (a 100,000 sq. ft. playground bordering on the lake and reserved exclusively for residents), a village-inspired centre, a general store including reception and restaurant facilities as well as a hiking trail in the forest. On the whole, the project was imagined as a way to optimize and cultivate the sense of intimacy between residences and residents.

The Club de la Pointe offers, among other things, access to Lac Supérieur for swimming, tennis courts, a pool, kayaks, a pétanque area, a yoga space, a gym and outdoor fireplaces. Come winter, residents take part in cross-country skiing and snowshoeing, as well as skating and broomball on an ice rink set up on the lake. Less than 15 minutes away, residents reach Mont-Tremblant National Park, one of Canada’s most prestigious ski centres, as well as many golf courses.

Unlike the typical approach of conceiving and marketing real estate projects, Fraternité-sur-Lac wants to steer clear of simplistic dichotomies between the urban bustle and peaceful rural life, by reaching out to a community of buyers who see both of these realities positively and who seek to balance both harmoniously instead of pitting one against the other.