Fanshawe college is set to train the next generation of installers.

The first batch of students attend Fanshawe College’s Window and Door Installer training program. After completing the five-month training, they will be ready to step into the real world of window and door installation.

This month, the first group of students will begin a complete window and door installer program in London, Ont. This is an exciting and bold step forward in filling the industry labour gap.

Let’s get to the big news first, in case you haven’t already heard: Fanshawe College in London Ont., in collaboration with North Star Windows, Heritage Renovations and other industry members, has launched a five-month window and door installer training course this month (October 2020). Twenty-five graduates will be ready the day after their graduation to start work.

It’s actually a good bet that they’ll all be hired before they graduate. The lack of skilled installers, as everyone in the industry knows, is extreme, but finally something concrete is being done about it. “The regional demand for qualified installers is so high that one company like ours could hire all of the graduates from this program,” notes James Baker, the program instructor and vice-president at Heritage Renovations, a large window and door installation firm in southwestern Ontario. “Over 15 companies have already expressed interest in hiring graduates.”

His sister, Shannon Ruffell, vice-president of strategic planning and implementation, adds that “we’ve had a sign out front for quite some time that says ‘Hiring Experienced Installers’ and have about 100 people a year apply that way, but we only hire the very best, and we’ve only hired about two through that avenue. Most hiring is being done through highly competitive networking.”

This program is one of very few in Canada and the only one being offered at a post-secondary institution. For the most part, installation skills are learned on the job, sometimes passed down from generation to generation and there are gaps in the skill level across the country.

It’s hard to attract people to the industry, adds Ruffell, as there’s a perception that it’s hard work that doesn’t pay particularly well. But, she explains, “It’s lucrative, stimulating and challenging year-round work that’s very rewarding. Installers in southwestern Ontario make over $100 000 a year, and they have unmatched job security.” Baker adds that “our company has grown aggressively the past five years, and it’s been impossible to keep up with demand. Labour has stalled our growth and we’re very excited about this program.”

Before we get into how the program came about and its exciting details, here are the nuts and bolts.

The five-month window and door installer training program is funded in part by the governments of Canada and Ontario through the Skills Catalyst Fund. “This Fund supports the development and implementation of initiatives that test new and emerging approaches to labour market challenges,” explains Christine Spicer, project lead at Fanshawe. “It provides one-time project-based funding, and participants that enroll this fall must be part of traditionally-underrepresented groups: women, indigenous peoples, newcomers, persons with disabilities, veterans and youth.” The Ruffells say that due to overwhelming demand, an equal representation of all groups will be accepted to make up the 25 qualified applicants.

Program birth
The idea for the program was presented to Fanshawe about two years ago by Sheldon Dyck, general manager at North Star Windows in St. Thomas, Ont. “The new Ontario government said it wanted to support the trades, and so that really got things going,” he says. “A consortium formed to develop the program, which includes North Star, Heritage Renovations and some other private companies, Window Wise and some recruiting agencies. There are three groups within the consortium that focus on orientation, curriculum and employment follow-up. I’m very excited about it. It’s the start of making sure we have enough labour support for the industry.”

Baker adds, “We had had some meetings with North Star and Fanshawe over the last few years about getting a program going and it was very exciting to get the green light in March.”

Yes, although the basics for the course were in place in March, the entire team had only a few months to nail down exact learning outcomes, how students would gain each required skill and much more. It was decided that students will visit manufacturing plants to see raw materials and how products are built, and they will also visit Heritage Renovations’ large showroom to learn about the range of windows and doors available on the market.

Course details
“It’s a one-of-a-kind program for Canada and we wanted to be very technical and detailed,” Baker explains. “We want graduates to be able to start installing the day after graduation. So their training will include real-world conditions: working at heights, inclement weather, removing old rotten windows – everything. A high level of thought has gone into the content, implementation and structure to ensure all participants will obtain a high level of proficiency. They will experience what install days are really like and be able to perform all tasks exactly as if they were on a real job site.” In light of the pandemic, the entire course will include as much physical distancing as possible, and other protocols will be similar to those being used right now on job sites across Canada.

Speaking of those real-world conditions, during the last few months, Ruffell and Baker have been constructing a model installation wall. It will be moved outside so that students are exposed to the elements, heights and so on, as Baker has explained. “They will have different challenges every day and learn a variety of techniques,” says Ruffell. “They will practice with windows, bays, bows, patio doors and entrance doors.” Students (not that they will need it) will also receive training in getting a job: resume writing, mock job interviews and so on, both from Heritage Renovations and career placement agencies. 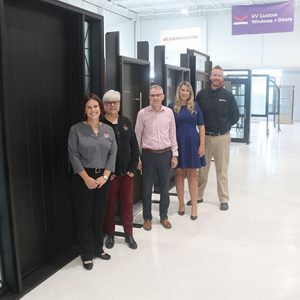 James Baker, vice-president of Heritage Renovations shares his industry insights and knowledge with the students.

Looking forward
The plan is for the course enrollment to be expanded for fall 2021 and for the course content to be honed by that point to incorporate feedback from companies that will have hired the first graduates earlier that year. Ruffell and Baker both can foresee that this window and door installation course will be available in every province and that, eventually, it will become a formally recognized skilled trade.

Baker can’t wait to begin. “I’ve met people at all levels and there is always the complaint and frustration about labour and everyone was waiting for someone to do something,” he says. “We’re very excited to be part of the team that’s taken action.”

He believes that moving forward, there will be no limit on growth and expansion across the window and door industry, from manufacturing to shipping, sales and service to installation. “This program will have a significant impact on the economy of this region,” he says, “and eventually, other regions in Canada.”