Are aluminum windows poised for a resurgence? 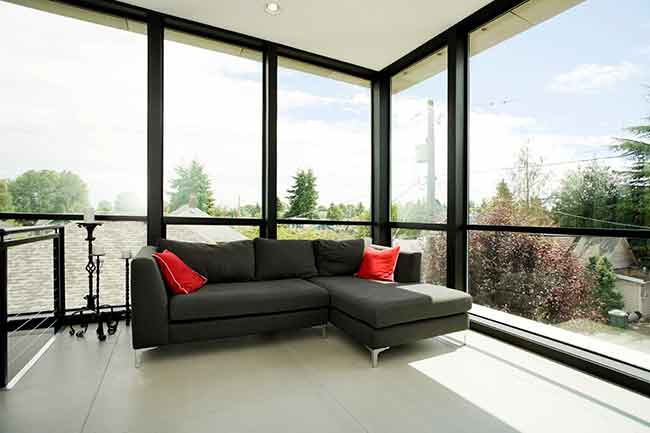 Cost will probably keep aluminum on the back burner as a material for mass-produced windows. But architects’ demands for larger sightlines and improvements to thermal breaking technology may open the door for more aluminum luxury products.

For decades, commercial buildings across the globe have benefited from maximum use of glass windows, supported by high-strength, low-weight aluminum frames.

But with all the benefits that aluminum provides—a more modern and low-maintenance aesthetic, to name only a couple—where does the material’s popularity currently stand in residential applications? According a Ducker Research 2014/2015 study commissioned by the American Architectural Manufacturers Association (AAMA), there were 4.6 million shipments of prime windows into residential projects in 2008 in the U.S., including new construction and remodeling and replacement. In 2011, that number was at an all-time low of 2.5 million units.

But this year, the number of those same prime window shipments is forecasted to go back up to 5 million units.

So yes, there appears to be an upswing in the residential market.

However, when you look comparatively at sales of vinyl, there is no contest. In that same Ducker study, U.S. unit sales totaled 29.8 million in 2008, falling slightly to 25.7 million—and are projected to go back up to 37.3 million units in 2016.

Put simply and bluntly, usage of the two materials simply does not compare.

A trend to watch?
With a difference of approximately 35 million units between vinyl and aluminum sales, one might be remiss to say that the use of aluminum windows in residential applications is becoming a “trend to watch.”

That said, Mike Bruno, president of Everlast, has seen first-hand an increase in demand.

“Everlast has seen an increase in demand for aluminum up by 37% in residential buildings,” says Bruno. “While high rises have always been traditionally aluminum, we’re now also seeing townhomes with three or four stories—that is, multi-resident buildings and condos—starting to put in aluminum windows.”

So what is driving the adoption—albeit slow-rising—of aluminum in residential applications?

Architecturally driven
According to Mark DePaul, business development manager for window and door profiles at Royal Building Products, the move toward aluminum frames is probably starting at the very beginning of the supply chain: the design stage.

“I call it the ‘architect’s hangover,’” he says. “Many architects have a previous history with aluminum—so when they start to design a building, aluminum is often the default material they turn to. They may choose it simply as a function of the process, like if they’re designing a commercial building. Or they may choose it due to the perceived structural integrity of aluminum, as being stronger. Or they may choose it due to the lower sight lines that aluminum provides, offering more glass area in any given window.”

Fenestration Canada president Skip MacLean’s observations echo DePaul’s musings regarding windows in residential applications. “There is a sector of the custom home building market that is designing structures that take advantage of natural lighting,” he says. “Positioning and size of window area has become a critical area of home design.”

Bruno concurs. “A designer who’s used to the West Coast trends tends to like the cleaner lines and larger glass areas…we’re definitely seeing more of a trend on more modern builds and larger patio doors, which lends itself to aluminum windows.”

Unfortunately, meeting the architectural desire for bigger views and narrower frames is not without its challenges.

Compared to vinyl, fibreglass and wood frames, aluminum conducts heat and cold the least well. As such, aluminum must be specially protected with thermal break technology to properly compete with other materials for energy efficiency and market share.

So, says DePaul, while architects and designers may be thoroughly enjoying the look of aluminum and driving its usage, “…the energy and building codes are shifting in a direction that is really moving aluminum out of favour.”

Hybrid: the next frontier?
To fit in with what architects and designers are looking for, what building and energy-efficiency codes will allow, and what the manufacturer’s (not to mention end user’s) budget can afford, hybrid is appearing to become a smart go-to solution.

Certainly, hybrid technology is nothing new.

Now, successes in innovation continue to improve upon the benefits that aluminum windows have traditionally offered.

For months, DePaul and Bruno have embarked on a joint venture between Everlast and Royal Building Products.

The end result, soon to be released, is the Altitude Window: a combination of aluminum on the exposed surfaces with a proprietary thermally efficient core—bringing a higher thermal performance level to windows for multi-family mid-rise and high-rise projects. The new product will have capabilities of .19 with three panes of glass, and a dual-glazed version of that window will be .23 to .25, depending on the glass package.

Selling a final product that meets the wants, needs and requirements of all parties is quite a challenge, but Bruno is confident that Altitude will meet all criteria, “…whether it be building code, air, water, or energy rating—so this will appeal to builders, designers, architects and commercial applications.”

Another big mover in energy efficient windows is RPM Rollformed Metal Products. Its Climatech Spacer, produced for IG manufacturers, is a premium locally-made product. Made out of Electrolytic Chromium Coated Steel, the spacer makes thermal breaking possible due to a bonded thermal bridge that is perforated, allowing the desiccant to absorb moisture. The spacer is compatible with both bendable and non-bendable manufacturing process requirements.

According to Yousif Abachi of RMP, the thermal properties afforded by the Climatech spacer “have become something very desirable by architects.” In fact, in just the past six months, RPM has seen a 300% increase in sales for that product alone.

The business of working with aluminum
Hybrid certainly creates potential for new business and entering new markets. However, Bruno advises that creating a hybrid aluminum product is not without its challenges.

“Everlast comes from a history of building windows for 55 years, and to build an Energy Star-rated aluminum building is much different than with other materials,” he says. “It’s not a very easy product to get into. There are many challenges regarding inventory levels and having access to the right fabrication equipment. There are many processes involved, so you also need the right level of knowledge or expertise in being able to manage inventory and production capabilities, among other things.”

Moreover, adds Bruno, the time period from design to production varies greatly between vinyl and aluminum. “If we were building Altitude as a vinyl-only product, it would take six months; but when aluminum is involved, it’s more like 18 months to bring it to market.”

What’s next?
“There is always an evolution of technology in the market space,” says DePaul. “First it was wood, then vinyl—and at some point in time, I think something will come along that challenges vinyl to be the primary residential window material.”

So are hybrid windows the “next big thing” to make an impact in residential applications?

DePaul isn’t sure. At least for now, he says, “…I think we’re going to see solutions like hybrid technology, which tries to leverage the tried and proven aspects of both vinyl and aluminum, to come up with a single window solution.”