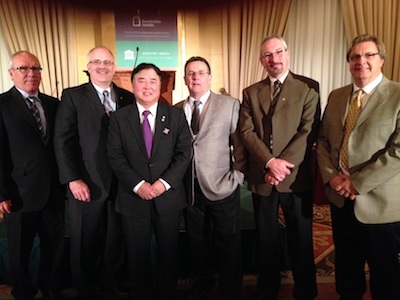 Skip Maclean of TruTech Doors, Fenestration Canada president, opened the Annual General Meeting on Saturday, June 14, with about 30 in attendance.

Financial
Members heard that association finances are healthy, with revenues up and reserves maintaining desired levels. Fenestration Canada brings in approximately $474,000 per year through membership dues, event fees and the Windoor show.

Skip Maclean of TruTech Doors, Fenestration Canada president, opened the Annual General Meeting on Saturday, June 14, with about 30 in attendance.

Financial
Members heard that association finances are healthy, with revenues up and reserves maintaining desired levels. Fenestration Canada brings in approximately $474,000 per year through membership dues, event fees and the Windoor show.

Nominating
Yvan Houle of Portes et Fenetres, chair of the nominating committee, announced that two board members, Robert Jutras of Air-Ins and Dan Darcy, had completed two terms on the board and were now required under the bylaws to step down for at least a year. Mark Straub of Roto Fasco and Matt Kottke of Truth Hardware have left the industry and departed the board. Houle said the board will proceed at a reduced size for now, but will be looking for new blood to join at its meetings at Windoor. The executive will remain unchanged for 2015. He also reviewed some small changes to the association’s bylaws that bring them into harmony with the new Canada Not-For-Profit Act.

Fabricators Council
Lisa Bergeron of Jeld-Wen, chair of the Fabricator’s Council, reported that group has a lot of work ahead. A priority for the Council is to better define the role of installation within NAFS and pinpoint who bears the onus for installation-related failures. Bergeron relayed the Council’s recommendation that the board look into preparing installation guidelines for all the regions in Canada so there is a common standard.

Government Relations
Bergeron also chairs the Government Relations Committee. She said the Committee is working with a group called the Canadian Energy Efficiency Alliance to lobby the federal government on retrofit standards and energy standards. The group is also trying to get tax incentives reintroduced to reward builders for upgrading their fenestration products and homeowners for retrofitting their homes for increased performance and energy efficiency.

Membership and Marketing
Laura Weil of Euro Vinyl Windows chairs the Membership and Marketing Committee and she introduced a new brochure aimed at recruiting new members. Look for it to be everywhere at Windoor. The M&M Committee is also overseeing a total overhaul of the Fenestration Canada website. The Committee has called for each board member to recruit two new members. The M&M Committee is also overseeing changes improving access to the national association for members of affiliate associations, such as Fenestration B.C. or the Insulating Glass Manufacturers Alliance. Affiliate association members can purchase non-voting membership in Fenestration Canada at a reduced price, provided they have not been members of Fenestration Canada for at least five years.

Technical
Robert Jutras of Air-Ins, chair of the Technical Committee, reported on the huge amount of work that has gone into preparing labeling guidelines across the regions. A major focus has been on standardizing one set of measurement units. The Committee is working with regulators now on new requirements for revolving doors and folding doors. It is also trying to have screwholes on handles and knobs exempted from meeting NAFS standards for air/water ingress.

Education
Jean-Francois Kogosevek, chair of the Education Committee, reported on the Committee’s plans to approach building officials across Canada with education about the North American Fenestration Standard. They are producing four webinars per year, and building officials and homebuilders are approaching the Committee to ask for help understanding the new standard. There is some debate as to the best way to fill these requests.

Windoor
With Matt Kottke leaving the industry, Rick Pries of Veka has stepped into the role of Windoor Committee chair. The show celebrates its 20th anniversary this year, and special events are planned. A Blues Brothers imitation band will provide entertainment, and special recognition will be extended to the original Windoor founders and exhibitors who have been with the show since the start.