Articles Community Events & Shows
FenCon19 : Another step in the evolution of a world class Window Conference 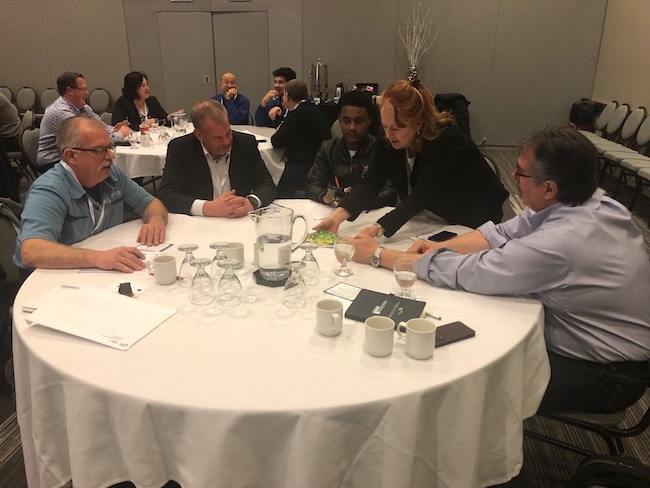 Mar. 26, 2019 – Three years ago, the leadership at Fenestration Manitoba realized there was a need for a new annual event. Inspired in part by the extraordinary CME Manitoba group, we chose to launch an educational manufacturing conference with a pure focus on fenestration. The somewhat natural and easily marketable descriptor – FenCon – was the natural outcome!

In retrospect, its even more obvious that a very special source of inspiration and motivation has been created over the first 3 conferences! A true win/win/win has been achieved in multiple ways – window and door manufacturing people are learning new and better ways to improve their processes, suppliers have obtained a MUCH LOWER COST and more impactful way to engage window manufacturers AND there is a great deal of engagement, interaction – from all parts of North America and even Europe!

The increasingly positive reviews have sometimes come from almost surprising angles and sources. Joseph Machine Company was a sponsor and speaker on automation for the second year in a row and delivered some intriguing ideas by Sanjay Parikh, VP of Operations in a workshop after which he commented, “I appreciated the educational value that I received on behalf of Joseph. FenCon19 brought some special insights into operations that I will take back to our engineering and production teams and THAT is the unexpected benefit of coming to Winnipeg”!

We worked diligently first at creating programming that would appeal to window and door manufacturers first and foremost. The focus remained to a fair degree on Continuous Improvement – augmented by the Operational Excellence session by Vern Campbell, University of Manitoba – but extended presentations in other unique ways. Participants had requested the input of an economist and we were fortunate to be able to obtain Glen Hodgson, a highly experienced, connected and knowledgeable expert for the breakfast keynote “kick off”. A second keynote, Billy Taylor, came highly recommended from Continuous Improvement circles and lived up to his reputation. Billy caught their attention immediately with his Boom! and continued with very personal and memorable examples of how manufacturing can step up and make long term, impactful changes.

The first Platinum sponsor, Thorwesten Maschinenbau, spearheaded the automation sessions with excellent insights into their work in 53 different countries and how their research pays off in factories. The expertise of Christian Luthman was clearly evident in discussions formally and informally, reflecting his personal visits to some 800 different window factories in time. A second automation workshop consisting of Joseph Machine Company and PMC Automation brought new and deeper insights and potential for both automation and implementation of robotics. But while investments in equipment can and will be increasingly important, another workshop focused on resourcefulness in completing and managing your production team. Todd Leroy, Senior VP of Production, Loewen Windows, brought special focus to their success to adapting their factory such that a higher percentage of the work can be done by women as well as promoting them into leadership positions.

The kaizen portions of the programming were without doubt the most impactful. We had been fortunate in engaging a highly qualified and yet diversified team of presenters and educators. Workshops varied from a “reporting back” session which allowed insights into how a medium size firm has launched and developed its program over the past 3 years while Frank Schaefer, Décor Cabinets, brought focus to the innovative 2 Second Lean approach. The 2 ½ hour workshops – CI for Management and Kata, run simultaneously by different instructors – on day two allowed for a much more engaging and intensive teaching process. In fact, it was quite clear during and after the sessions that both window makers and even suppliers and presenters were leaving with new inspiration for implementing Kaizen and its benefits.

FenCon19 sessions once more touched on quite a diverse range of other topics and issues, ranging from operating software to finishing fiberglass door panels to increasingly complex venting window hardware.

We are quite grateful that Fentro introduced our team to Siegenia Hardware for the Tilt N Turn hardware session while Amesbury Truth focused on some newer issues including restrictors on casements and awnings. Aquasuretech drew a packed room and some excellent reactions to their continued development of better finishes and equipment for higher levels of automation. The operating software session was again led by Matt Batcha, FeneTech. The participating group was smaller undoubtedly raised some important considerations. We believe in a world powered by software that there is MUCH more to be achieved in these sessions and possibly even a full stream with specialized topics. Cold climate and ultra high performance also merged paths in Winnipeg. Robert Clarke, LONG time expert on true high performance glass, delivered a highly informative presentation ranging from dynamic glazing to vacuated glass to Alpen’s latest version of Thin Glass. Once more, Jon Eakes stepped up with a somewhat controversial but ultimately convincing and successful presentation on more effective rain screen principle/cold climate installation techniques – followed by a tour of the Red River College test facility.

We are deeply grateful to the industry from beginning to end. The confident re-investment in the industry – especially by numerous continuous and repeat exhibitors and sponsors such as Fentro Technologies, Cardinal Glass, Adfast and Roto to name just a few – is critical to the success of FenCon. The level of commitment is also apparent from forward leaning window manufacturers including JELDWEN, Loewen, Alliance Door Products, Yarrow, Westeck and DUXTON who have the drive to register at least 5 people from each of their companies to keep learning . . continuously!

The most gratifying feelings come from a combination of feedback from somebody like John Neels, VP of Manufacturing, Westeck Windows & Doors, “Thanks for pressuring me to come. As a result, we brought foremen from 3 different plants and found excellent value from the trip. The whole combination of meeting other window manufacturers, touring other facilities and educational sessions were very valuable. We will definitely be back!” And also, Tom Hassell and Robert Clark, Alpen High Performance Products, “We really enjoyed the conference and felt the entire event was very well organized – friendly and engaging! We headed home re-energized by the conference.” And lastly from presenter, Frank Schaefer, “I think the organizers have done an excellent job putting FenCon19 together with great speakers throughout the day! I heard a lot of positive comments directed towards the organizers and how much they care about the industry and each other’s businesses.”

Finally, another interesting comment emerged toward the end of FenCon19, “Its noticeable how the window makers have increasingly opened up to each other over the past 3 conferences – realizing they have much more to gain by exchanging ideas than remaining silent.” Sounds a little bit like that quote – a rising tide lifts all boats – and that would be the objective of this unique, North American window manufacturing conference – based in the heart of the continent. FenCon20 is still in early planning stages – stay tuned!