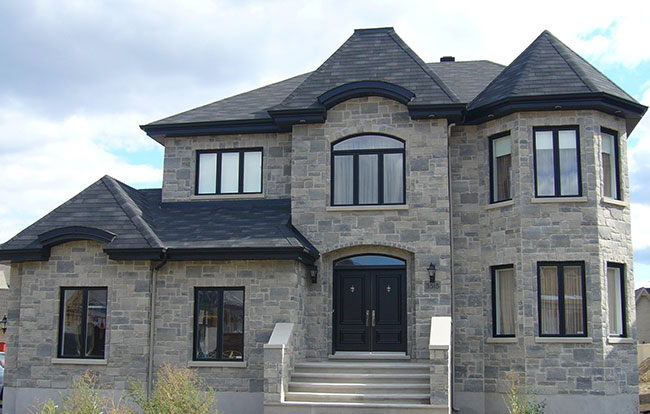 Wilton Panorama has seen a lot of growth in the upper end single family home market.

As a snowstorm rages outside his office, softening the prosaic lines of a Saint-Léonard industrial park on the Island of Montreal, Nick Hladky ponders how the COVID-19 pandemic has stood his supply chain on its head, challenged his ability to attract new employees, and brought a flood of business to his company, Wilton Panorama, which specializes in residential and low-rise condo projects.

“After the shutdown early in 2020, the market took off and hasn’t stopped. I’ve been doing this long enough to have seen lean years, so it’s a blessing to have demand in our industry this high,” Hladky muses.

He is also fortunate to have surplus warehouse capacity, as short turnarounds for supplies have gone out the window.

“We are buying more in advance. I had placed an order in April of last year for an essential part, and it is only ready for pickup just now. Something that would normally take a month to get can now take several months or even over a year. The warehouse is full of raw materials. PVC, aluminum…you name it. We need cushions. Our PVC supplier is a great example. Usually, it would take three days to get an order. Now it can sometimes take a month,” Hladky explains.

When materials are not available, Hladky must get creative. “For one component,” he recalls, “I got the material from a furniture maker. I had to think outside the box to cope.”

Hladky’s father, William, founded the company, then called Wilton Aluminum Products, in 1969 in a 2,000 square foot building in Montreal North. The company purchased Panorama Windows in 1995.

“Panorama was a pioneer in the manufacturing of PVC windows in the Montreal area,” Hladky says. “Although Wilton and Panorama are still two distinct companies, we have been going through a re-branding process, which included a revamped website and a new Wilton Panorama logo which launched a few months ago.” 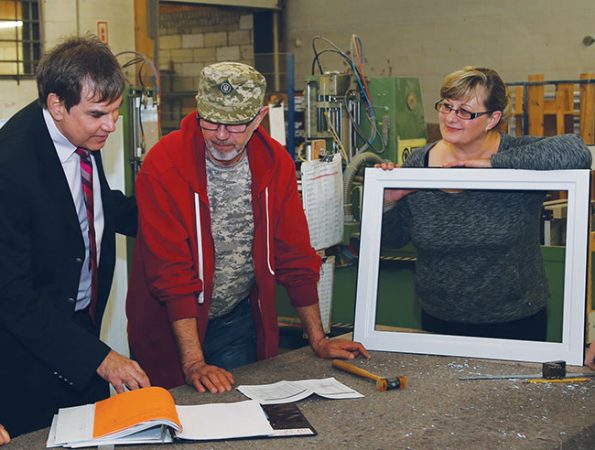 A family business
By 1989, Wilton Panorama employed 15 people, including Hladky’s wife, Luba, his brother, John, and their father.

“He approached me to see if I was interested in coming on board. The company had recently moved into a new 20,000-square-foot facility. As a student, I had worked summers with my dad, the first couple of years in the plant and later in the office. I had an idea of what the window business was like. I picked up my initial experience from my father and asked a lot of questions.”

Before joining the company in a full-time role in 1989 and slipping straight into the president and CEO’s chair, Hladky relates, “I studied accounting at Concordia and became a chartered accountant (now chartered professional accountant). I worked with Coopers and Lybrand, now PricewaterhouseCoopers, for six years, then left to become vice-president of finance with one of my clients: an advertising agency and art studio downtown.”

Wilton Panorama continued to grow, adding a retail store and showroom in Quebec City in 2006 and another in Salaberry-Valleyfield (roughly south of Montreal) in 2015. The company now has 50 employees and 50,000 square feet of production space in two facilities — one for PVC windows and the other for aluminum. The showrooms have been hopping since the pandemic began.

“Our showroom traffic been crazy. Our traffic is also multiplied by our dealers. The volume of sales is up,” Hladky says. However, he emphasizes, “The main strength of our company is that we sell our products through numerous distributors that cover many Quebec regions. Our main source of sales is through our dealer network. We rely on [the dealer network] to develop contracts. They are our team.”

Hladky adds independent dealers are becoming harder to find. Window and door manufacturers buy them, they close, or they are taken over by the next generation of family owners, sometimes breaking the chain of goodwill with manufacturers.

“You are fighting for a bigger piece of a smaller pie. We had a couple of new dealers come on board last year. They quickly became quite a big dealer of ours,” Hladky says.

Wilton Panorama happily relies on its dealers to do installations.

“We have no intention right now of expanding the installation side. Developing the installation side is complicated and it is expensive to maintain. I’ve lived through that,” Hladky says. “We are there to help and train our dealers as much as we can and to provide them with the tools that they need to sell and install our products.”

A one stop shop
Wilton Panorama offers quite an extensive variety of window and patio door products in PVC, hybrid (aluminum and PVC) and all-aluminum, in hung, sliding, casement and, most recently, tilt and turn configurations.

“We strive to be as much of a one-stop-shop as possible for our dealers,” Hladky says. “Most of our products are targeted towards dealers, contractors and consumers that are looking for higher-end products than would be found in a hardware store or sold to contractors that are simply looking for the lowest price point.”

Key suppliers, such as Novatech, PH Tech and Alumican, provide Wilton Panorama complimentary products that it does not manufacture, such as steel doors and certain models of PVC, hybrid and aluminum patio doors.

“Door manufacturing is simple on a small scale, but to do it efficiently you need to be doing at least 10,000 doors a year. It has become a lot more complicated than it was before,” Hladky says. “There are a lot of designs and Energy Star requirements.”

Running a busy company during the biggest pandemic the world has suffered in more than a century also causes complications. Supply chains are a mess, material prices have skyrocketed and suitable new employees, despite thousands of businesses having lost the battle for survival, are hard to find.

“My sealed unit supplier is constantly telling me that he was, last year, often borderline not getting glass on time. There are no glass manufacturers in Canada. It all comes from the U.S. There used to be glass plants in Ontario and Quebec City, but they have all closed. Now, post-COVID plants are having trouble meeting demand. The cost of the wood has doubled from a year ago. We’ve had four price increases in the past year. We are constantly trying to protect our margins,” Hladky says.

Recruiting new employees is also difficult, Hladky adds. “The week that the federal government reduced COVID benefits we had a surge of walk-ins looking for jobs. Unfortunately, most didn’t fit the mould of what we are looking for. There is a lot of competition and increases in the minimum wage results in older workers asking, ‘Why am I not making more?’ There is pressure to increase their salary, to make the gap larger.”

A few years ago, the company implemented a program where every year it hires student interns from backgrounds such as engineering, computer science or marketing.

“The students are generally very enthusiastic and have helped us to advance many projects. Some have even been hired on a full-time basis once their internships have ended,” Hladky says. 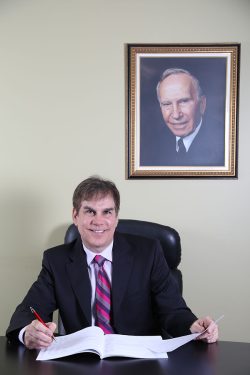 CEO Nick Hladky in his office. On the wall behind him is a portrait of his father and company founder, William.

Reaping rewards
While Hladky juggles these issues and others, such as the “lightning speed” increase in technology and his goal to continuously evolve toward a digital work environment, his company is reaping the rewards of the fit between their quality products and what he says is a growing demand for bigger windows.

“Everyone is pushing the envelope, but if a proper product that can handle the structural requirements isn’t used, a window may sag, and seals can open over time. I saw this in a condo project: windows that were banana-ing, resulting in the outside seals opening and creating water infiltration issues,” Hladky says. “As soon as you have to send a guy on site to correct something, your profit is gone.”

“We launched Montana in 2020. It’s an all-aluminum product line of tilt-and-turn and fixed windows, as well as doors based on European technology. Our target market is the high-end residential sector seeking contemporary styled windows with minimal framing, and able to support large double and triple glazed sealed units,” Hladky says.

“These contemporary houses are building their windows as big as possible,” he adds. “The Montana series reduces the mullion widths by almost half. That adds up to a lot more glass. Since our products can handle larger and heavier sealed units, we are seeing a lot of growth in the upper end single family homes new construction market.”


Related
Editorial: In search of silver linings amidst the dark clouds of the pandemic
York Aluminum celebrates 50 years
Tiltco launches new sister company TiltcoAP
NGAWDDA announces board of directors for 2016-2017