Homeowners are asking for more closed spaces and privacy.

Barn-style doors are popular with homeowners who want open concept as well as the ability to close the area off.

Lockdowns during the pandemic have limited people within the confines of their homes. Homes now serve as private offices and personal schoolrooms among other things. Consequently, the need for privacy and seclusion within the home has become important.

Diana Elliott, product manager of doors at Jeld-Wen Canada, notes that the company is seeing a shift at the ground level. People are expressing a desire to move away from open concept and creating more defined spaces within their homes. When this happens, the next question is what are the needs for the door? Does it have to be sound-proof? Is there a need for natural lighting? Should there be glass on the doors?

Working with the homeowners directly are the renovators and custom-home builders. Marc Esposito, co-owner of Otis Interiors says that among his clients, open concept is still ideal and preferred on the main floor. However, he is receiving plenty of requests for basement conversions.

“People are asking specifically for defined office spaces for themselves and workspaces for their kids. Whether it’s a door or a partition wall, we’re finding that people are really interested in creating spaces for specific purposes,” he explains.

Esposito adds that often customers want multi-purpose rooms. For example, his company is working on a project where the client wishes to use a basement room as an office 90 percent of the time and as a guest bedroom for the other 10 percent.

When creating these defined spaces, the type of door required depends on how the homeowners intend to use the space.

Elliott explains that if the need is to reduce sound, people are looking for solid core doors, like Jeld-Wen’s ProCore door for example, that can help minimize noise and distractions.

She adds, “When creating that defined space, it is important to consider the use of French doors with glass panels as it helps in feeling not closed off. That is when the homeowner has to take into consideration how important sound management is versus letting that additional light come in.”

Elliott says that the glass-panelled doors can also help parents keep an eye on what their kids are doing while being in a different room. “That way you can still see if they are doing their school work while you attend a video conference in your office.”

Often, the request may not be for solid doors but for “door-like situations,” finds Esposito. Otis Interiors has received several requests for pocket doors, also known as barn-style doors. These doors allow homeowners to partition the space off, if and when they need it.

“For most of the time, you could leave it open,” says Esposito. “For example, we built an addition last year that had an opening into another room. The clients wanted the ability to close the space off from the rest of the house when they have friends over for dinner so that their kids could sleep. So, most of the time the area is wide open and the door is pushed into the corner against the wall.”

Gordon Wornoff, shop teacher and former president of A Higher Plane, has encountered the need for closed spaces in his own home and is considering installing a barn-style door. He has seen people requesting sliding barn doors and accordion-style folding room dividers quite a lot recently. He has personally not seen requests for complete closed places a lot and says that the lumber prices have contributed to this factor. In his own home, he has an open concept main floor. For this he has considered barn doors but finds them to not be timeless and elegant. So, he plans to create a custom roll-up door out of wood that is hidden most of the time and can be pulled down when needed. 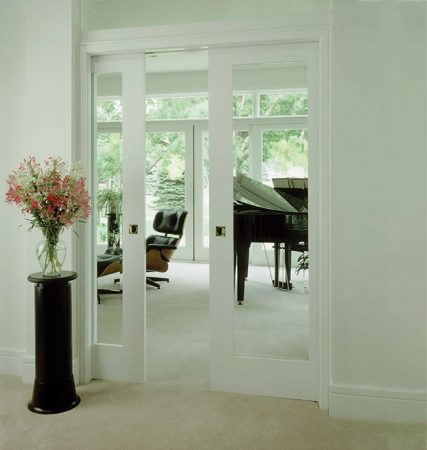 Clear glass doors allow people to have a separate space while still being able to keep an eye out on the goings-on in the next room.

Wornoff says that the pandemic has certainly caused a shake-up in open concept. With kids inside now, people do not want the noise travelling through an open concept house. The house needs to function differently than it did before.

“Working from home, combined with not being able to have people over, has caused homeowners to rethink and re-examine everything. A lot of people who request open concept usually do it for times when they have guests and relatives over at their place,” explains Wornoff.

There is still quite a lot of demand for open concept on the two main floors generally, finds Esposito. But there are several nooks and crannies around the house, such as behind stairwells or off laundry rooms that are being turned into work spaces. “There is a need to be creative here. Unless you are building an addition or a custom home from ground up, you have to work with the existing footprint. We are essentially using doors to use the space more efficiently.”

Interestingly, doors are being used not just to block off people inside but also to block off the outside, says Esposito. “When people are in their open kitchen, they don’t want to look at the messy office room and the work table. So, the office is on its own and a separate entity that does not need to be organized all the time,” he explains.

When it comes to glass doors or separators, transparent glass is not the only choice. Elliott says that clear glass doors can be distracting as you are able to see people walking by. However, that is not the case with textured glass as only a blur is seen when someone goes by, limiting visual distractions, while still letting the natural light in.

Esposito has come across requests for such doors, especially in basements.

“We have done this in our house as well,” he says. “Frosted glass works well because you have the privacy and the light.”

Additionally, every time they work on a purpose-built room, Otis Interiors has had conversations regarding sound-proof doors. According to Esposito, even though people have closed office spaces, kids might be running around outside or upstairs. Therefore, the doors and walls have to be able to block off that extra noise.

While we are still mostly indoors, vaccinations have started and there is hope to return to normal activity sometime in the near future. So, would the closed concept go away with return to work? Elliott says that recent polls and studies suggest that the majority of the people who are currently working from home want to continue in some aspect to be able to work from home.

“There’s a lot of talk about hybrid workforces, where you’re spending some days in the office and some days working from your home office. We’ve also seen a lot of people have leave the urban hub. People are making these transformations not just as a short-term solution,” she says.