New technology can help when skilled painters are hard to find. 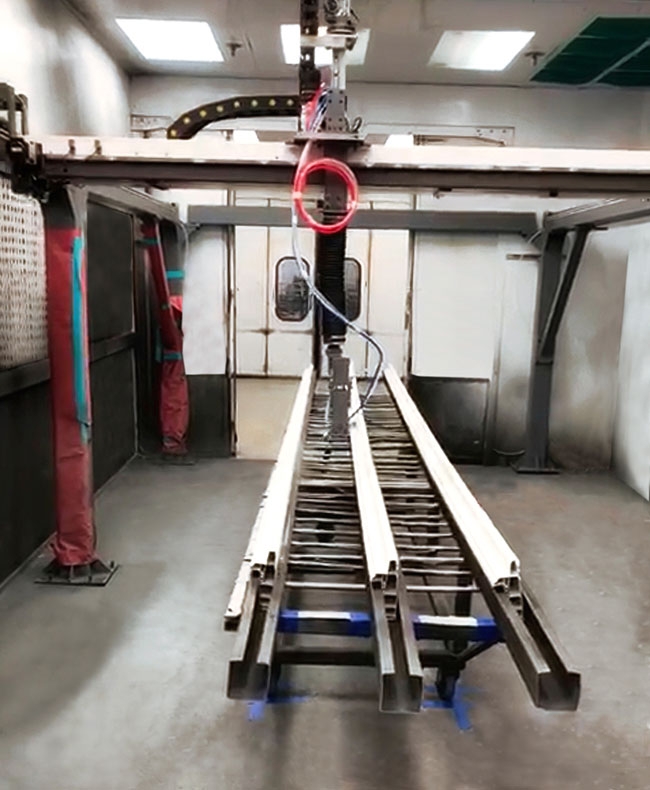 AquaSurTech realized less was more when it comes to machine enclosures. They install the gantry system right inside a customer’s spray booth, saving floor space and making it possible to finish very large pieces. Photo: AquaSurTech

More door manufacturers than ever in Canada are painting in-house – and that means more are opting to automate the finishing process, especially for fibreglass and steel doors.

“A lot of painting used to be outsourced but companies are now doing it themselves because they want reduced lead time,” notes Luca Tosetti, owner at INT Machinery in Toronto, the Canadian distributor for door-finishing equipment made by Italy-based Giardina. “It also means that if something goes wrong with the finish on one door, say out of an order of 20 doors, you can deal with the problem right away and ship the order out.”

However, if your painter is absent for any reason, explains Maria Jasminez, you will experience some serious downtime. “If you don’t have a back-up painter, over time it’s likely your painter is going to risk some sort of repetitive strain injury,” adds Jasminez, who is head of customer relations at AquaSurTech, which has offered water-based coatings and stains for almost 25 years and has mixing operations in Toronto, Montreal and Ohio and also offers custom coating services and automation technology. “There is only so much output a human can provide, consistently, in one shift.”

Jasminez adds that in Ontario (where most of Canada’s door manufacturing occurs), there are not that many painters available and it’s therefore really hard to retain them. “The competition is so fierce,” she asserts, “that some other company is going to be desperate enough to get your painter by offering a higher wage.”

Therefore, instead of choosing to have painting done in-house by hand, door makers are opting for automated systems, which are fast, consistent and require fewer and less-skilled workers.

Jasminez says this route has proved cost-effective for their customers in terms of logistics, material handling and eventual warranty claims. By offering a turn-key solution, she adds, there is also no finger-pointing between suppliers in case of a problem.

However, there can be hesitancy to get a robotic system, notes Paul Breault, sales manager at Quebec-based PMC Automation. He believes this likely stems from the fact that door finishing is not yet an industry where robotics are standard. “The fear of lack of talent to utilize the technology effectively is often present,” Breault observes, “but a robot is just a machine with six servo motors, programmed like any other multiprocessor.”

Sales for the automated finishing systems made by PMC are quite high in Quebec (over 20 installations), and Breault muses that this could be due to Quebec door firms having more difficulty getting workers than elsewhere in Canada, or simply positive word of mouth among customers there. “It could also be that some firms outside Quebec aren’t looking at true ROI, including costs of new minimum wage hikes,” he notes.

For some firms, automation is not warranted as their door volumes aren’t quite high enough, but in some cases, machinery with some degree of automation may be considered for a specialized finishing procedure. This is the case for Chameleon Wrapping and Lamination in Edmonton, which applies colour foils and also wood laminate to doors, door jambs and window frames and started automating their window frame finishing about five years ago. (Their window machine applies primer, then the film; the windows are then stacked and cured before a polyurethane topcoat is applied.) Chameleon Topcoatings, also in Edmonton, has offered custom finishing for windows and doors for the building industry for ten years.

The specialized door finishing for which Chameleon Wrapping and Lamination may consider buying a machine involves pressing wood film onto the aluminum slab and sealing all six sides, explains president and CEO, Amber Gunderson. “It lasts a very long time as moisture cannot enter,” she says. “We are importing some doors finished this way this year and we’ll see how they are received in the market. If it goes well, we will look into purchasing the machine for this.”

Specific equipment advances
PMC has offered robotic systems for door finishing for about three years and Breault explains that each installation is tailored to the specific needs of the end user. Systems can include head and sill finishing, jamb assembly, insert install and hinge install. They have also installed systems that position windows for painting (helping to reach shadow grooves in the corners, for example) but none for doors so far.

The most recent development at Giardina is the addition of a patented feature called Dualfast a few years ago. It allows for very quick colour changes because the system has up to four different colours at the ready at any time. “When you need to change colour, you remove the plates which closes the flow of one paint, and when you add the new set of plates that triggers the other circuit to allow another paint colour to flow,” Tosetti explains. “You can also flush out colours that are not being used right now and load new ones if you want.”

AquaSurTech continues to make “great strides in automation,” says Jasminez, and has recently launched new machinery since the release of their LH1100 automatic door coating machine in January 2017. “In 2018, we completed 11 installations of various pieces of automation equipment,” she says. “These include the semi-automated lineal painting machine, the FlamePro and the LH1100.” Customers range from small to high-volume producers.

Del Windows and Doors in Stoney Creek, Ont., purchased a first-generation LH1100 in the late 2016. Spokesperson Leo Stabile says they use it to paint steel and fibreglass door panels, between 20 and 30 panels a day. “I recommend you have proper fixtures made for holding the panels in place when painting, and racks to hold the finished panels,” he says. “The system is very easy to use once all programs are in.”

About a year ago, AquaSurTech staff – having heard from many potential customers that they didn’t have the space for both an LH1100 and a spray booth  – recognized that the mechanisms of the LH1100 could be easily transferred into an existing spray booth. “It was a lightbulb moment that we didn’t really need the housing,” says Jasminez.

With this concept, the firm created the Universal Gantry Spray System and launched it in 2018. “Basically, we took the housing off the LH1100 and directly assembled the CNC-driven robotic spray arm inside a customer’s existing spray booth,” Jasminez explains, “through the use of a gantry track system.” With it, you can paint doors in excess of 42 by 95 inches and larger window boxes and lineals up to 21 feet.

No matter what automated system or finishing machine is chosen however, there will be a learning curve of some sort.

For Giardina systems for example, Tosetti explains that it takes a few months to get familiar with how to use the paint. “There are several types of paint on the market, water-based and solvent-based, some working at high pressure and some at low pressure,” he says, “and the same type of paint – water-based/high pressure, for example – will be different from different paint suppliers. Typically, our customers pick a paint supplier, do their tests and stick with that one supplier or maybe have two.”

All AquaSurTech automated systems are designed to use the firm’s water-based coatings. Initial programming takes about 15 minutes and changeover of design and colour about 10 minutes. “On installation, we do the programming for the customer’s SKUs and pre-populate the menu and submenus with options in the system for custom jobs as well,” Jasminez says. “The operator just chooses the type of job – doors, boxes, lineals – and paint, [choosing] from one to five colours.”

Related
FenCon19 seminar: The Big Finish – Painting your own door panels is easier than you think
2019 Door Product Showcase: Thrill your customers with these top components and door systems
Technoform Bautec expands capacity to meet North American demand
RegaLead to paint the town at GlassBuild America