Articles Fabrication
There and back again 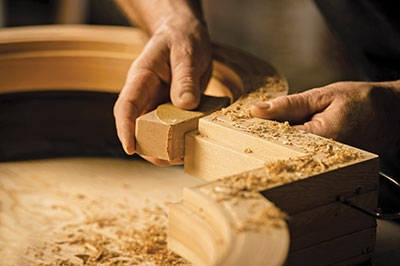 Loewen has stayed true to its roots as a builder of luxury wood windows even as most companies have felt compelled to go into vinyl. Babiuk says the strategy has worked well, and will continue to guide the company’s approach in the future.

The popular wisdom is that you can never go home again. But this may not be always entirely accurate. In 2010, Manitoba-based Loewen Windows went through arguably the biggest change in its history when the Loewen family sold it to the Danish company VKR Holdings.

The popular wisdom is that you can never go home again. But this may not be always entirely accurate. In 2010, Manitoba-based Loewen Windows went through arguably the biggest change in its history when the Loewen family sold it to the Danish company VKR Holdings.

The 108-year-old Loewen business had been family-owned, and its headquarters remained in Steinbach, originally a Mennonite settlement, but now a city of 13,000 – and one of the fastest growing cities in Canada – about a 40-minute drive southeast of Winnipeg. Aside from its Mennonite heritage and former “dry town” status, Steinbach was known largely to Winnipeggers by the old jingle “it’s worth the trip to Steinbach,” which featured in ads for the Steinbach auto dealers. Loewen was another well-known local part of Steinbach.

But over the years things had changed at the company, as they sometimes can over the course of, at that point, 108 years of family ownership.

“Well, we were a group of siblings, two of whom were involved in the business and two who were not,” said Loewen Windows’ Charles Loewen. The brothers — older brother Paul, Charles, Clyde, as well as the younger Stewart and John — had been involved in varying levels of the company in the past. Charles and Clyde were more recently the two brothers who were most involved with the company.

“The two who were not, you know, were getting into their 40s and 50s and typical of family businesses – the way I like to put it – is kind of interests started to diverge.”

At one point before the great recession of 2008, Loewen was estimated to have had 1,500 people on its payroll. That changed after the recession. The Winnipeg Free Press estimates that the company has half the payroll it had at its peak.

“We were starting to see that the bloom was coming off the housing boom and it looked like we were going to have some difficult markets ahead of us,” said Charles. So we explored a number of options and came up with what we thought was a very good situation with VKR. We thought, well, they’re Danish and a much larger company, we liked their focus on quality upward end, on integrity and ethics and so on and thought that they would be a good steward for the business, as indeed I think they were for the three years they owned it and so we came to an agreement with them and the family sort of exited at that point.”

Not that it was an easy thing for the family to do. Charles, for one, had worked at Loewen since he was an eight-year-old looking for something to do on the weekends. He became more involved as he got older and eventually assumed a larger role when his father, the famous C.P. Loewen, died when Charles was in his 30s.

So the purchase went down in 2010, three years went by and things changed for VKR. They started to make noise about divesting.

“I will say as a purchaser of the business, and having been involved on the board, VKR was a very good steward,” said Charles. “They had to change strategy which is why they decided to sell not only Loewen, but almost all of their operating entities they divested of over the last two, two and a half years.”

Says current CEO Al Babiuk of VKR, “The decision to get out of the different businesses was very much in concert with diversifying their investment portfolio entirely out of building products with the dollars that they generated. So they’re looking at, you know, becoming a – what they called a financial investor and holding the skylight business as sort of their operating business but very much diversifying out of an entire building products concentration, which is what the portfolio had become.”

This past summer, Loewen went through arguably the second-biggest change in the company’s history when some of the Loewen family and a group of investors bought back Loewen Windows from streamlining VKR. The divestment was not a statement about the value of Loewen Windows, it was merely the result of a company readjusting itself. Also divested at the same time was another VKR past purchase, Gienow of Calgary, Alta., which the Danes had originally acquired in 2009.

In retrospect, it may have not been much of a surprise that this happened, that the company was sold shortly after it was purchased and that the Loewens were in a position to reacquire the firm. Charles Loewen was still on the board of the VKR-owned company, and with an ear to the ground knew what was going on.

“I was aware back, well, I guess, two years ago, when their basic corporate strategy was changed because I was on the board at the time. I was, as a board member, informed of the strategy (to look to sell Loewen Windows),” said Charles. “Probably a year and a half into the sale process, I was in contact with VKR and their representatives to explore – and they asked whether I might explore the possibility of putting a bid together. So that was about, I guess, November of 2012, at which point I left the board because of an obvious conflict of interest. And then started – I had to find sort of a core investment group and doing some analysis and then conversations and negotiations with VKR.”

But, despite the obvious connection between the Loewens and the company, the buy-back was not a fait accompli.

“It was not an instant yes,” said Charles. “I was, I guess, excited in the neutral sense of that word.”

“The industry still in very early stages of a slow recovery and we believed and continue to believe that there’s not going to be a quick snap back, that the old days, if you will, that is, you know, of two million housing starts a year in the US and boom, boom, boom, boom, boom. Those days aren’t coming back in our lifetime. And so our view of it as a risk was different. When you have money and you’re putting it into something, you’re wise to do a very harsh, cold-eyed assessment, which is what we tried to do.

“People might be surprised how little heritage and legacy factored into our decision and I suppose they might even be pleased to hear that our decision was based primarily on what we felt was our best assessment of the risks going forward and the challenges and hard work ahead.”

With this 3.0 version of Loewen Windows, Charles Loewen is back as chairman of the board, brother Clyde is part of the executive management group (focusing on product development), and Al Babiuk is president and CEO, as he was through the VKR years.

So, what’s the next step for a reacquired company in post-recession North America? Is everything back to the way it was, or is there a different plan moving forward? According to Al Babiuk, the company may be looking a little more eastwards these days, for one.

“(The west) still continues to be our largest market area but we were underpenetrated on the east coast for several reasons,” said Babiuk. “One was the range of impact product and hurricane product. The other one was really the double hung design that we had on our previous product offering for double hung. It wasn’t really meeting the traditional architectural styles needs of the east coast. So we addressed both those from 2008 through 2011 and that allowed us to really focus on developing the east coast dealer network – both the northeast as well as the southeast and so we’ve done that over the past several years and continued to add dealers in those regions which has allowed us, you know, good opportunities to expand where we had been weak prior to the downturn… but really centred around not having had the double hung product or the range of hurricane product that we needed to capitalize on that.”

But the company’s efforts don’t just have to do with only expanding their territory.

“We’ve spent the last couple of months refining our plans for the back half of the year now that we have, what I’ll call control over prioritizing,” said Babiuk. “So that the areas of focus are certainly on product development. You know, we’re doing work on our systems to better support the customers as well as the manufacturing process and that’s been ongoing through the VKR period as well. It’s more behind the scenes for efficiency and costs and quality control. And, you know, we had really made a deep investment in lean process redesign on the manufacturing floor and we’ve been aligning our work plan to continue to focus on that.”

But at the same time, the company is aware of what it is and how people view their products.

“We’re definitely committed to the premium end of the market,” said Charles Loewen. “That’s where our brand stands. That’s where our product is recognized and, you know, we target our design and the manufacturing of the product to really meet the quality expectations of that segment. In terms of strategy going forward, we’re going to continue to focus on there. We will, you know, certainly not leave our home base and go from manufacturing wood, you know, wood, traditional wood or wood clad product to a pure vinyl product. That would be a shift that would not make sense brand-wise or competency-wise.”