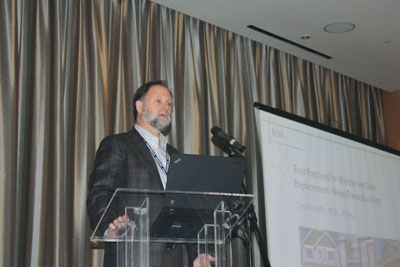 If you wanted to sum up Fenestration West, western Canada’s flagship
fenestration event, in one word, intensive might be your best choice.

If you wanted to sum up Fenestration West, western Canada’s flagship fenestration event, in one word, intensive might be your best choice. Change could be another. Conferences such as these make you really realize how quickly our world is changing and reinforce how important professional development is if you want a chance of keeping up with it all.

Flynn Canada, Stella Custom Glass Hardware and Layton Consulting kicked off the day by nabbing the last GCABC Project of the Year award ever (next year it will be the Fenestration B.C. Awards) for the stunning Earth Systems Science Building at the University of B.C. Debra Dotschkat, conference chair for the event explained why the project was chosen as project of the year. “The LEED Gold-certified ESSB was selected as an excellent example of some of the creative solutions created by glazing industry professionals,” she said.

Mark Layton, president of Layton Consulting, was presented the Community Contribution award for his outstanding contribution of time, talents and efforts to various community events and charities, such as the Vancouver Children’s Hospital, Cystic Fibrosis Canada, Theatre Under the Stars, Scouts Canada  and local food banks.

Topics from the sessions included best practises for replacing windows and doors, specifying commercial glazing products in B.C. in compliance with the new energy codes, the North American Fenestration Standard and its impact on the commercial and residential fenestration industry and fourth-surface low-E coatings.

Perhaps the presentation that drove home the reoccurring messages of change and innovation most was the keynote speaker, Murray Frank of Constructive Home Solutions. Frank’s presentation, “Safety, Efficiency and Sustainability: The New 2012 B.C.

“They have raised the bar and are pushing the envelope towards greater energy efficiency and are beginning to embrace an aging population with new code language that looks at accessibility,” says Frank. “The changes are substantial and are going to create two very different worlds for minimum energy performance for commercial and residential designers and builders in the province.”

A significant change for the 2012 B.C. Building Code is that glass received an upgrade in this revision. In the past, the spec for glass was splattered all over the place with different standards for windows and doors and skylights which now includes tubular daylighting devices. According to Frank, authorities have unified the minimum requirements and extrapolated all of the various references to promote glass to its own section, Section 9.6. “Windows, doors and skylights are all rolled into one,” he explained. “Transom glass and sidelites are all part of the door specification. So even though the windows right next to it are identical, these units are actually part of the door system. People should be aware of it.”

It is also important to understand they added a reference to ASTM E2190 for performance and evaluation of insulated glass units. “There is an actual IGU specification in there,” states Frank. “Where that has its greatest impact is on site glazing. For those few projects that still involve site glazing, there used to be a loophole that said you could install any glass in there. Even though window manufacturers had requirements in their processes, this kind of snuck through the cracks. The codes officials have made it so that you now require compliant IGUs in site glazing.”

According to Frank, the new code also states builders need to minimize condensation on windows. “I don’t like terms like minimize in the code because one person’s opinion on minimize might be vastly different than another’s. It leads us to a lot of fights out in the trenches.”

Another key takeaway from Frank’s presentation was that under NAFS-08, it means that if windows, doors and skylights conform in B.C., they can be sold anywhere in the North America. However, American built windows are not necessarily tested under NAFS with the Canadian supplement. “So a truckload of attractively priced U.S. windows may not be a good bargain.”

Frank also cautioned attendees to be aware that as of Dec. 20, if a company is going to sell a window for installation in British Columbia, they need to provide installation instructions or the installer cannot conform to code. “That’s a huge line and I’m not sure if they thought that one through to its greatest impact,” says Frank.

Vancouver is also going to have a “feebate” program. In the City of Vancouver, the fee for a single family permit is around $6,000.

According to Frank, if you build to the minimum of these new code previsions and energy requirements, chances are you are building at about an EnerGuide Canada rating of 82. “If you choose to build at that minimum level, they are going to charge a 100 per cent surcharge on the building permit of $6,000, so it will cost you $12,000 to build the worst possible performing house that you are allowed to build in the City of Vancouver,” says Frank. “However, for every EnerGuide point that you qualify above 82, they will take $2,000 off of that. And they won’t stop when they get to zero. They only stop at an equivalent of an EnerGuide rating of 90 at $21,000. Theoretically, you could forgo all permit fees and make $9,000 and if you choose to build to EnerGuide 90.”

“There is a lot of money available from the City of Vancouver to help builders understand that better windows will have a dramatic impact on their EnerGuide ratings. You are going to see builders voluntarily install heat pumps, high performance low-E  triple units with argon, and other options to drive their EnerGuide rating up because they will be able to build a house cheaper in the 86-90 range than in the 82 range. There may be more feebates available than the cost of the windows. Be prepared to help your clients understand that it may be free to go to better windows.”

With free high-performance windows, networking and education, it was an intensive day indeed.

About the author
Rich Porayko is a professional writer and founding partner of Construction Creative, a marketing and communications company located in Metro Vancouver, B.C. richp@constructioncreative.com.
Print this page