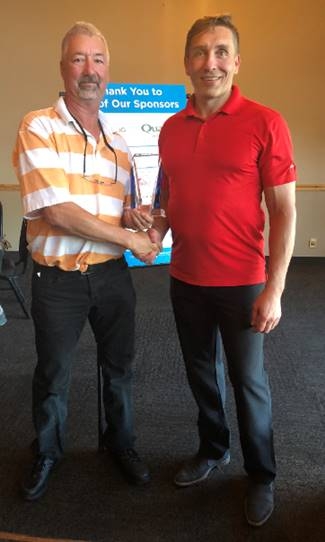 It all kind of came together with a little bit of luck and lots of elbow grease including the usual amazing organizing work by the FenMan Executive Director, Nancy Zubriski.  Blue skies throughout, perfect temperature, little or no wind, well manicured greed St Boniface golf course, larger turnout than 2017, a dinner with excellent food, great support by the supply industry AND a recognition of Aurele Robin as Builder of the Fenestration Manitoba organization!  What more could you ask for?  FenMan president Gary Blad provided the MC leadership including the presentation to Aurele.

Sean Kapusta, General Manager, HiTech Windows, “Thanks for the great day, it was lots of fun and its so easy to get out there and relax and enjoy a special day with members of the window manufacturing industry!”

Erdem Gogceloglu, Klaes Software, “I was the luckiest golfer of the tournament!”

I finally found the time (seems Aurele is always on the run and hard to pin down) to sit down with Aurele for a “journalistic” type of interview and it proved quite interesting.  It seems Aurele went straight to work following completion of high school and found himself in quite a variety of roles and industries and locations.  Aurele’s first 15 plus years of adult working life found him in a welding position with Hunter Wire & Steel, working in auto body shops and even in Saskatchewan running concrete plants.  In reality, Aurele was just meant to spend a life in window and door manufacturing and that stage of his life finally came along in 1983.

Aurele had been looking for a business to buy when they stumbled upon Dominion Windows, located on Main Street in Winnipeg.  John Dominic, founder, had reached a point where it was time to sell the business as it turned out that his son was determined to go back to teaching.  After about 6 months of negotiations, Aurele reached an agreement and following the participation of some of his family members, concluded the purchase.  Aurele and brother in law Claude Fiola (he remained active in the business for less than 5 years before going back to construction) dove in and within 5 weeks were forced to hire 5 more people.  It turns out that Aurele loved the business so much that he has spent the rest of his adult life, following the evolution of window demand from aluminum to vinyl and from more manual to more automated.

In fact, when you listen to Aurele, it seems he has repeatedly moved a step ahead in quite a variety of ways.  Very early on, the Dominion Window operation had decided to vinyl windows to their offering and started by buying them from local fabricators.  However, it didn’t take long and Aurele had decided to adopt the brand new Thompson Plastics system and began production with their first one point welder in about 1987.  They had found high demand for vinyl windows and decided , why don’t we do this ourselves?

That theme continued further as the next step became the manufacture of insulating glass.  Super Spacer had just appeared on the scene and they decided to get into that business also and launched Bison Glass.  And, it turns out, Bison Glass was doing something special also and began producing and selling glass to many other window fabricators.  “Unfortunately, Polar Windows had taken THE Gold spacer so we had to settle for a grey one,” says Aurele with an amused smile.  Somewhere along the line this conversation, Aurele says, “Whenever I was told can’t do it, it would be get me motivated to figure out how to do it anyway!”

Automation proved to be another example where Aurele was determined to lead the way.  “Paul Loewen once said to me, I want to get to a point where lumber is loaded into the factory at the front end and windows come out the back end with hardly any human touches!”  It seems Aurele was already motivated but then somebody from PH Tec added fuel to the fire by commenting, “That kind of automation can’t be done in the window industry.”  Needless to say, Aurele proceeded to develop robotic automation and invested something in the range of a million dollars into mechanization that could accomplish all kinds of tasks.  In fact, he ended up patenting quite a number of the developments that came out of this advanced work!