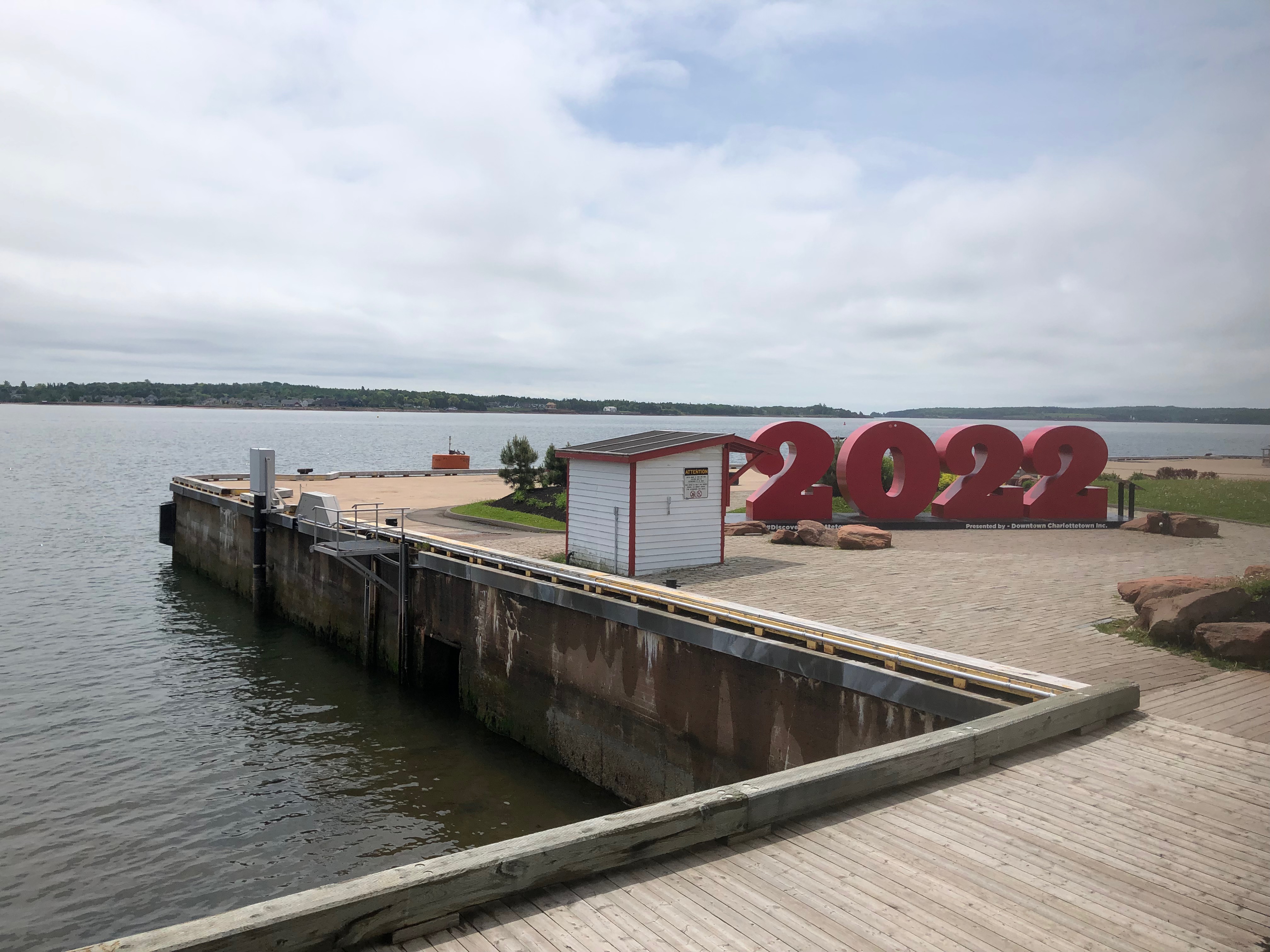 Fenestration Canada’s Spring Conference in Charlottetown, P.E.I., represented first and foremost a chance for industry friends and colleagues to renew in-person acquaintances after two years of distancing and remote meetings. The excitement to all be together again in one place was palpable from the opening night’s President’s Dinner through the social outing to Red Shores race track and casino and in the buzz of discussion at the educational sessions, committee meetings and supplier showcases. Kudos to FenCan organizers for an excellent venue that took advantage of Charlottetown’s scenic waterfront and a relaxed pace that managed to get all the important work in. Hats off also to association vice-president, Cam Drew of Thermoproof Windows, who leveraged his background in radio to provide some smooth and easy-listening emcee work for the entire event. 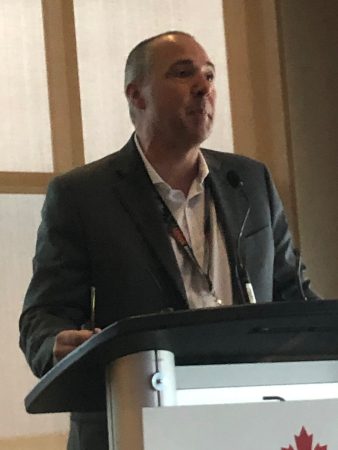 Cam Drew expertly took care of the introductions and announcements.

The President’s Dinner satisfied the main expectation of everyone attending from west of the Maritimes: lobster. Mike Bruno awarded the President’s Award for outstanding contribution to the association to Adrian Edge, project director at Innotech Windows and Doors in Vancouver. Bruno noted that as a relative newcomer to the industry (Edge started at Starline Windows in 2019) Edge has made an outsized impact with his hard work supporting the Fenestration Canada regional chapter in B.C. Edge wasn’t able to be at the dinner in person, but Bruno shared a video of him presenting the award previously. Edge said he was honoured and humbled to be recognized.

Notes from the education sessions 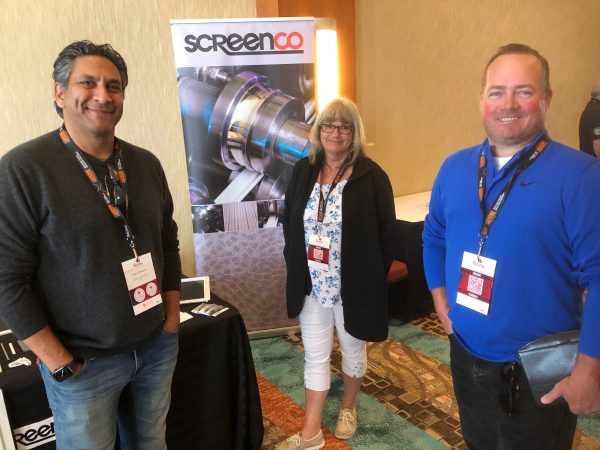 Marc Chinapen (left) and Jayme Tilley of Screenco got a visit from Jason Neal of SAWDAC.

Jason Neal, executive director of the Siding and Window Dealers Association of Canada, had a “fireside chat” with Drew, complete with a blazing YouTube fire on the video screen. He explained SAWDAC’s frequent role as a mediator between clients and fenestration dealers and how he is often able to convince homeowners who are mad to give dealers and installers another chance to fix problems. Neal explained the Window Wise program, noting that it really does establish a higher standard of service quality and hugely reduces the callbacks that manufacturers get on their product installs. He said SAWDAC’s Renoplan financing creates an average 20 percent increase to the value of sales for dealers who use it. He talked about government incentive programs for energy-efficient windows and why they haven’t often worked as intended. Neal says the incentives should be offered to dealers, who would then push higher-performing products. He’s recommended as much to government officials, who have promised to “take it under advisement.” Neal also explained SAWDAC’s efforts to grow its installer training program, including an initiative to work with First Nations groups.

Jonathan Layton and Taylor Wight of Layton Consulting travelled all the way from Surrey, B.C., to deliver a talk on thermal modeling, with last-minute help from Jon Hill of Keystone Certifications. They used the analogy of the German autobahn highway to explain that everyone wants to go faster when it comes to modelling, but no one is exactly sure of what direction they should travel. Misunderstandings and confusion about what standards, test results and labels mean is common. For instance, they pointed out that U-value is a rate of heat transmission through glass, not a measure of insulating value. As such, there is a time component and the temperature differential between the outside and inside of a window is important. Different standards treat this differently.  European standards such as Passive House can be poorly structured for Canada because they envision things like wider air cavities and higher baseline temperatures that don’t exist in North America.

Al Jaugelis, Fenestration Canada technical director, updated attendees on relevant changes in the 2020 National Building Code. A standard for spandrel glass has been added back in. The code has clarified that safety glass is glass that has been made fire and/or impact-resistant with films, coatings, tempering or lamination but not wire. This message is confused, however, by other sections of the code that still refer to wired “safety glass,” which is still allowed in applications to prevent blowout in fires. Wired glass cannot be used in showers or baths or in public buildings with occupancy above a certain number. 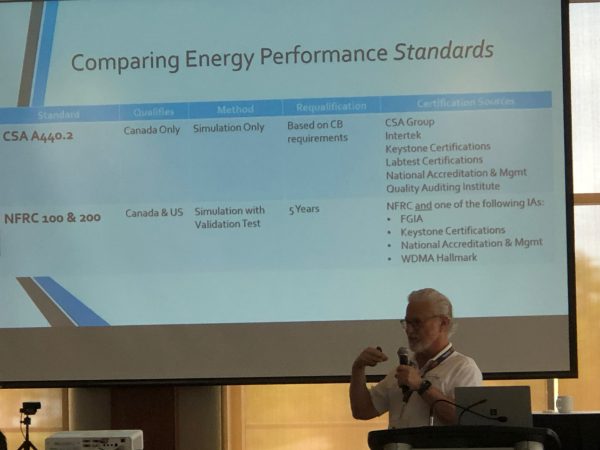 Jon Hill of Keystone Certifications stepped in to help out with the presentation on thermal modelling standards.

Residential windows need opening restrictors if the bottom sill is over 1.8 meters off the ground and less than 0.9 meters above the inside floor. The restrictor needs to stop the window from opening wide enough to let a child climb out and only be releasable with “tools or special knowledge.”

The code now includes a tiered energy performance requirement incorporating four tiers. The top two are not defined. The performance path requires a whole-building model. There is now a prescriptive path points system that allows builders to trade off component performance as long as they achieve the overall points required. For example, Tier 2 requires 10 points, with windows contributing 3.5 to seven points. Jaugelis pointed out that high-performance windows may become more attractive to builders under the points system as they may be the most cost-effective way to accumulate points that can be used to install less expensive HVAC and insulation.

Most of all, the Spring Conference felt great for the smiles, handshakes and laughs we’ve all missed for the last two years. The next Fenestration Canada event is Windoor, coming to Montreal on Nov. 9.