York Aluminum discusses keys to its 50-plus years of success 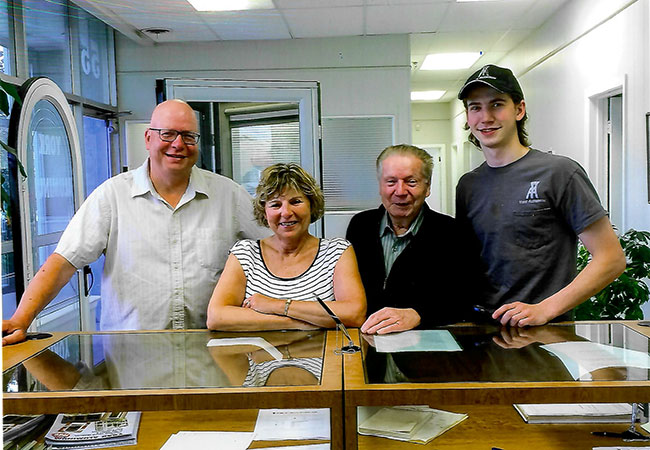 Ed, Marnie, Ernie and Kurtis have all been a part of York Aluminum’s succesful business operations.

These are the things that have allowed York Aluminum Storms (York Aluminum) to grow from its humble beginnings in 1969 as a 2,000-square-foot shop in Etobicoke, Ont., to a 35,000-square-foot manufacturing facility that has been building custom and standard-sized aluminum storm doors, screen doors, porch enclosures, entrance enclosures and storm windows for more than 50 years.

Building relationships has been key to the success of the business. Just ask Ed Weidner, owner of York Aluminum.

“From small beginnings to 50 years of success, it’s been about customer service, relationships, honesty and quality,” he says. “It’s hand-in-hand with how we are today.”

The family-owned and -operated business was started by Ernie Weidner, Ed’s father, who initially started up a window and door business with his brother a few years earlier before venturing off on his own in 1969.

“In the early years, he worked a lot. He worked hard to keep it growing and growing,” Ed recalls. “As time went on and he grew, he hired more and more people.”

Ed says putting in those long days is a key to building any business, especially during the first few years of operation.

“You have to put the time in if you want to be successful,” he says. “There’s not too many people I know who got filthy rich sitting on their duff working two hours a day.”

Ed followed in his father’s footsteps, joining the company in 1982. He started out working in the assembly plant, learning the manufacturing process for a few years before moving into the office in a sales role as the company expanded.

In the early years, York Aluminum’s growth stemmed from word of mouth from satisfied customers, which was largely comprised of contractors.

“For years we never had a salesperson on the road,” Ed says. “Customer service is key. Quality is key. You tell a guy something is going to be ready on Friday, you make sure it’s ready on Friday.”

Things changed and business picked up dramatically when the company signed on with a national distributor.

“That was quite a big leap, which gave us access nationwide,” Ed says.

Managing COVID-19
During its busy season, York Aluminum typically employs about 40 people. But due to the current pandemic and Ontario’s non-essential businesses being shut down for months, the company wasn’t working at full capacity as of early June.

“Right now, we’re still on our winter schedule which is skewed to the pandemic. It is because we have to be careful and we have to be mindful of that,” Ed says. “We should have everyone back and we don’t. Window and door people are just starting back up.”

That said, there has still been enough work to keep the winter staff busy in alternating shifts.

“We cut and punch one day and assemble the next day, so we don’t have too many in the plant at one time,” Ed explains. “Eventually we do have to get back to everyone here.”

Thankfully, outside of Ontario some of York Aluminum’s customers have been operating business as usual. Particularly, its customers in Atlantic Canada.

“The guys out east are busy,” Ed says. “New Brunswick hardly had any cases to begin with, so it’s pretty much back to normal. They can go out for dinner and a beer, but they have to social distance.” 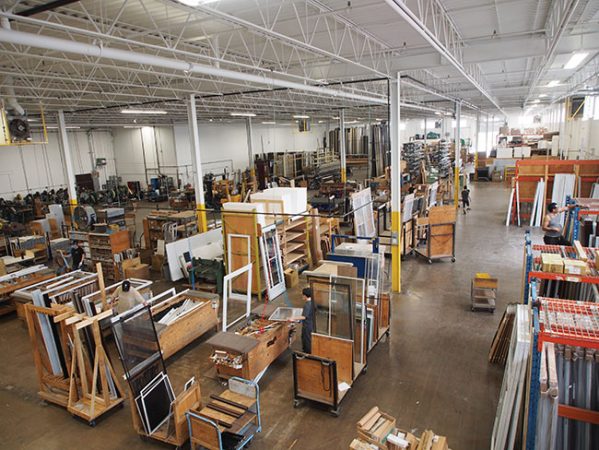 Overcoming hurdles
When a company operates for more than half a century, it deals with its fair share of obstacles to overcome. For York Aluminum, finding the right people is always a challenge.

Up until the late 90s, the company was being run by Ernie, Ed and his sister Marnie. But when Ernie fell ill, Ed’s leadership role changed dramatically.

“That’s when I sat my rear end on the big desk and took over the reins, and that was a challenge,” Ed recalls, adding that not having his father’s wealth of knowledge there on a daily basis made transitioning into the role more difficult. “Then it was a matter of getting people. Finding a good plant manager, good office people.”

Fortunately for York Aluminum, it has had several long-term employees over the years.

“We still have one employee that started with my dad in the early 70s. I have maybe a half-dozen guys that have been here for 20 years,” Ed says, adding that relationships between employers and employees can’t be one-sided. “You want them to want to come here. It’s getting harder to get young people into these industries. We really have to focus on turnover – not that I’m kicking anybody out, but they’re going to retire eventually.”

Changes in the supply chain have been another major hurdle to overcome for York Aluminum.

“It’s a lot harder for the small guy,” Ed says, adding that you can’t just go out and buy 100 hardware kits anymore due to price constraints for smaller orders.

He says that overseas suppliers have significantly affected the local market.

“Locally, flexibility is always greater. But there’s a cost to that,” Ed says, adding that York Aluminum typically buys based on its recent manufacturing history, but one big order can always throw a wrench into things, especially when you’re not buying parts locally.

People person
When asked what his favourite part of running the business has been over the years, Ed says its all the social aspects of operation.

“I’m a people person. When we weren’t the size we are, I did everything – sales, production. I miss sitting at the front desk dealing with guys, solving problems, looking at drawings – the social aspects. I still have it in a different way, but the day-to-day stuff, I kind of miss that,” he says.

The company supplies a wide array of contractors and window and door distributors, big and small. But when it comes to working with customers, Ed especially misses helping out small companies.

Succession planning
Ed recently enlisted his son, Kurtis, into the family business full-time. He just completed a bachelor’s degree in business at the University of Guelph and is excited to learn more about the operation.

“Now that I’ve got that behind me, I can get to work,” Kurtis says.

Kurtis worked part-time at the facility while in school, mainly in the plant.

“He worked in the plant, did deliveries, pickups, getting to know the manufacturing aspect of it, kind of like I did. I think that’s key,” Ed says. “I’m excited to have York Aluminum keep going as a family business.”

After Ernie recovered from an illness, he stepped back from his leadership role in the business and worked shorter hours looking after inventory and other aspects well into his 70s. Ed would like to have a similar transition one day.

“In a perfect world, that’s what I’m going to do,” he says. “Maybe I’ll golf twice a week, which I always say I want to. That’s sort of the plan. In a perfect world, I’ll have a place to go to when I’m 65 or 70 years old. It gives me something to do. I’ll be able to share my knowledge with my son from over the years.”

What does Kurtis think of Ed’s plan to stick around part-time and share his knowledge of the industry?