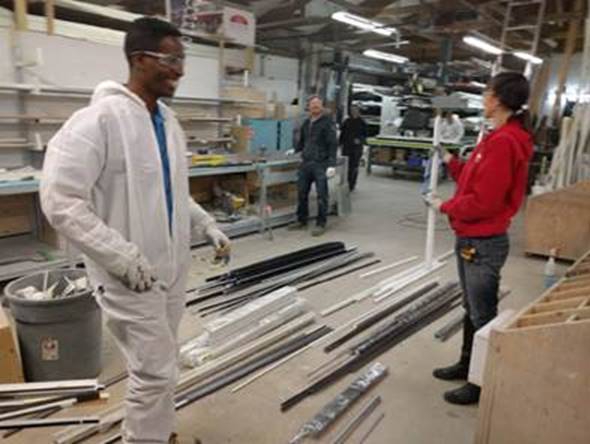 Ansley Dueck, continuous improvement manager at Duxton Windows and Doors, recently completed an overhaul of the Winnipeg fabricator’s quality and production processes and reported on her experiences at FenCon17 in early February. She has shared this report, which casts light on some of the challenges and benefits of embracing Lean manufacturing processes. – ed.

I have a green belt now.  A big, shiny green belt that carries opportunity on one side, and responsibility on the other. For those of you who don’t know a green belt, check out Canadian Manufacturers and Exporterss’ Lean program  – you’ll be glad you did.

The first step is to try out my new belt and its tools in our factory. The plant supervisor, Darryl and myself, set our eyes on one cutting station to turn upside down and reorganize.  The goal was to re-orient the saw, and build a new shelving rack. Simple enough? This was our first factory floor Kaizen Blitz. A blitz is typically a three-day focused event where you reduce cycle times and/or find more useable production space. Ours was mainly to gain back square footage in a very tight space. With a team of five people and three days (that was optimistic) we named ourselves “Z-Land” and developed a chant which my father was particularly fond of. “Z, Z, Z, Z, HAI!” Imagine each Z getting louder, and the president of your company exploding with enthusiasm. Welcome to Duxton!

Lesson #1 – Chants are really awkward, but they ALWAYS break the ice.  Find a good leader for the chant and your team spirit is up 10 points. (Also – have a hilarious president).

We dove into the area.  Almost two days of just sorting material, the good from the old, scratched, and obsolete.  And then, finally, the sorting was done!After sorting, we figured out how much material we needed to store, and designed our new shelf.  Put the shelf on order and wait three days for receipt. Shelf comes in – start loading it.  By now, we’ve got a team member on holidays, need to paint the shelf, and need to feed the production line, so this is done in broken chunks of work.

Lesson #2 – Don’t break up the Kaizen Blitz!  Keep your momentum and your team’s focus.

In the meantime we chip away at some other 5S standbys – a shadow board for tools and labeling shelves. In between, we have some hiccups, of course. The production staff put material in the wrong places after spending hours sorting from that exact same problem. It’s going to need ongoing check-ins to maintain it, but we’ve given them some great systems as a grounding for organized material.

Lesson #3 – Figure out how to maintain the changes – and then do it again a week later – and again maybe a month later – until you see habits change.

Finally some two weeks later, it’s done, and we prepare to present our accomplishment to the department and the senior production staff. This was a really inspiring and hopeful moment, after many hours poured into this blitz. The most inspiring part was watching our factory staff stand up in front of a group and present. In most cases it was probably one of the first public speaking events they’ve ever had. And they really did appreciate the changes and understand the reasoning behind it. With English as a second language, communicating can be a real challenge, never mind continuous improvement efforts which are not in their day-to-day responsibilities (yet anyways).

Lesson #4 – There’s nothing like hands-on training for continuous improvement. People don’t always see the benefits of CI until the transformation is complete and they have had time to reflect and speak on it. It may be enticing to skip the formal presentation, but witnessing the pride of work, learning, and professional development during those moments are truly precious.

Last thoughts on C.I. at this point in our early journey…

Lean advocates out there, stop pretending continuous improvement is so easy! It takes hard work and dedication, just like it does to start a business as an entrepreneur. You don’t wake up one morning and have a successful profitable business. You work away at it, think about it, learn from mistakes, make some changes, and repeat. Then one day, someone congratulates you on your great success. I’ve heard about too many start/stop journeys into continuous improvement, and I think it’s good to face some realities about it. No, it doesn’t have an instant payback.  But yes, we can improve people’s working environment and ease of work. Yes, we can transform workstations in a small amount of time. Yes, we can get people on board to be a part of the culture shift. But so far there is no quick fix. It’s grinding away at it. But I have to say, I’m the strongest believer in continuous improvement being daily improvements, no matter how big or small. And someday someone will congratulate us on our great success.