Articles Fabrication
Espresso and Windows: A look at the Woodbridge fenestration fabrication community

Most windows made in Canada come from Woodbridge. Why? 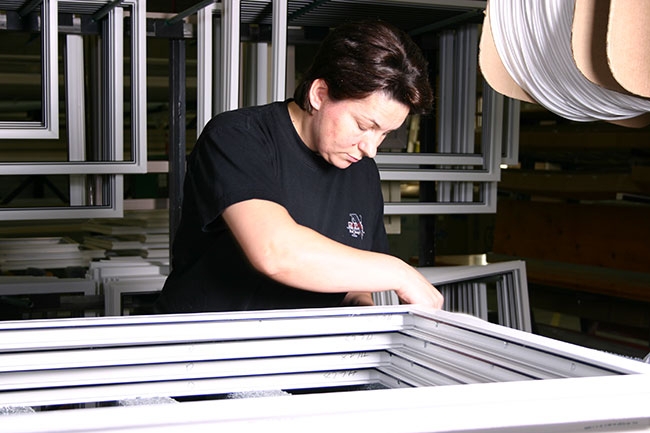 The story of Woodbridge window-making is really a story about vinyl and its rise to become the dominant fenestration building material in Canada. Here, Iwona assembles a frame at Euro Vinyl Windows and Doors.

To hear Frank Bruno tell it, there may be no more fitting place to found a fenestration operation than Woodbridge, Ont. He was a mere 16 years old when he joined Everlast Aluminum, a small aluminum shop, back in 1961. Over the next six decades, the company not only changed its name to the Everlast Group, but also changed its location, from cramped quarters in midtown Toronto to a cavernous 45,000-square-foot facility in Woodbridge.

“This has long been the place to go for those in the window and door business, although there wasn’t much around us here in the 1960s,” he recalls with a chuckle. Back then, Woodbridge was little more than a sleepy little rural community in the rolling countryside north of the big city. “But we knew even then that this was where we must set down our roots and grow.”

Today Everlast is still run by the Bruno family. Frank is still involved, but his business-savvy sons, Mike and Johnny, oversee the whole operation day-to-day, producing custom windows and doors for the new residential and commercial replacement markets. The Brunos remain firm in their fealty to Woodbridge as their home base.

“It’s where our suppliers are and where our customers have ready access to us,” states Mike. He’s referring to Woodbridge’s critical central location. One of six large hamlets within the city of Vaughan, north of Toronto, Woodbridge (one of the region’s biggest bedroom communities) is linked to the Greater Toronto Area (GTA) by the major provincial highway systems: 400, 407 and 427 and close proximity to Pearson International Airport. “We’re sitting on the doorstep of a huge market that just keeps on growing. There’s no sound business reason to move anywhere else,” he affirms.

Woodbridge also boasts the birthplace of Royal Group Technologies, long one of the largest plastic building-products companies in North America, and founded by the legendary De Zen family. Because Royal was among the few elites in the GTA for sourcing plastic extrusion products for the burgeoning new building industry in Ontario from the 1960s onward, Woodbridge organically became the province’s hub for the window-and-door manufacturing sector, luring such titans of fenestration as Jeld-Wen, Atis Group, Performance Windows and Doors, Euro Vinyl Windows and Doors and Trimbo Window Manufacturing. The ever-entrepreneurial De Zens also started up a new company, the Vision Group, making products like windows, doors, fencing and decking in its state-of-the art plants sited in Woodbridge.  “Like us, Royal started small, but became a powerhouse that attracted window and door manufacturers like moths to a flame,” adds Mike. “We helped create a city here.”

A relative newcomer to Woodbridge, T.C. Insulating (TCI) Glass is a leading manufacturer of double- or triple-glazed sealed units for the commercial and residential sectors. Founded in 1988 by Claude Levesque, the company was from the outset composed primarily with mostly family and other close ties to the glass industry for which Claude himself had worked for 20 years. TCI started in a 12,000-square-foot building in North York and grew quickly. In 1993, the company relocated to Woodbridge (in the Highway 7 and Weston Road area) into a 18,000-square-foot industrial unit. “We felt that being in Woodbridge where the Royal Group was located would help the company to greater exposure in the window manufacturing industry itself,” recalls Albert Levesque, Claude’s son and now company president. It was at this time that TCI began a dynamic business relationship with Cardinal Glass and began to produce soft coat low-E. TCI at the time was one of the first IG suppliers to begin producing these coatings. “We purchased our first automated cutting line in 1996 and followed that in 1999 with our automated IG line,” adds the younger Levesque.  In 2003, the company moved again, opting to remain in Woodbridge, in a brand new 29,000-square-foot facility at the junction of Highway 7 and Highway 27. “We did that as we felt that this area would be the window capital of Ontario with Royal Plastic and the up-and-coming Vision Group,” nods Albert. “We couldn’t ask for a more synergistic locus of operations. And as we continue to grow our business, we can easily expand our facility to make room for more equipment, more employees and more of our trucks as needed.”

The story of Woodbridge window-making is really a story about vinyl and its rise to become the dominant fenestration building material in Canada. Here, Iwona assembles a frame at Euro Vinyl Windows and Doors.

In addition to offering some of the lowest property tax rates in the GTA (Vaughan is maintaining municipal tax increases at under three per cent at the time of writing), attributes abound making Woodbridge (and Vaughan region) very attractive to the fenestration industry. According to the 2017 York Region Employment Survey, the city of Vaughan, plays host to approximately 80 companies (small, medium and large enterprises) involved in fenestration manufacturing (excluding glass manufacturing) and employs about 3,300 people in the region.

“We’ve always been in Woodbridge, it’s a great place to work and to live a pretty good life,” lauds Domenic Trimboli, vice-president of Trimbo Window Manufacturing, a maker of aluminum and vinyl windows and doors housed in a 15,000-square-foot plant a mere kilometer from the always-busy six-laned 400 Highway. He also lives in Woodbridge, about a four-minute drive from factory door to family abode, which he says is fine for working late and getting home quickly. Started by his dad, Damino, 32 years ago, it seems there was very much cultural fellowship that bonded the company owners in the area. “We were all competitors, but there was a camaraderie too,” says Domenic. A feature that makes this area so unique is its thriving Italian-Canadian community, one of the largest in the country, that has drawn many here since the 1960s. They were and are the Woodbridge big boys – the builders, suppliers, and dealers. “Everyone knows everyone else in our business. Our philosophy has always been why work against each other, when we can all work better together?” He points to the fact that if he’s unexpectedly short on materials, he can call on others to help out in a clinch. “I can go down the road to get what I need. We talk to each other, often meeting over espresso at the local Italian bakery and restaurants. I call this ‘respectful competition’ and it’s worked out well for us all.”

Christopher Meiorin, president of Euro Vinyl, which produces casement, awning, fixed, hung, slider and tilt-turn vinyl window systems as well as tilt-turn doors and patio doors, says he has a very personal affinity for Woodbridge. “I grew up here; I have embraced this town my whole life,” he says with a smile, speaking from his 35,000-square-foot facility. So back in 1986, with ample options to pick plum locations to build Euro Vinyl, he notes that, “Woodbridge was my natural choice. I’ve always believed that this is the place to be.”

Euro Vinyl’s market is high-end residential replacement in southern Ontario and its channel is a network of window and door dealers. Golf clubhouses have been a lucrative sideline for Euro Vinyl. Though he doesn’t golf, he has successfully leveraged a relationship with an architect into clubhouse projects all over Ontario and into the U.S. as far south as North Carolina. Due to Woodbridge’s enviable central locale, linking up to key transportation corridors across the province and into the northern U.S., including a few short kilometers drive to Pearson International Airport, Meiorin believes his company is geographically well-positioned to reach ever more far-flung projects.

Culture and coffee are the warp and weft of Woodbridge. From the get-go, Meiorin understood that, but it was only later that he got to know his place in it. “It is true – the density of window and door manufacturers in this one area exceeds that of anywhere else in North America. One of my first realizations was that being a tea drinker wasn’t going to cut it anymore. This Italian-rich area is fuelled by a high-octane juice that they call ‘coffee,’ and it is pulled off in style.” Most shops in the area, from retail to hardware fabricators, are well equipped with various types of espresso machines. The art of business in this Oz-like area seems to include a defined coffee ritual. “It took me a while to summon the courage to try espresso out. The coffee ritual offers a great team building experience. I was hooked. From that day forward, staff and customers join in with this ritual and it’s now a defined aspect of our business.” Euro Vinyl is in business to make high quality windows and doors, and, as Meiorin sees it, “Woodbridge is the place that makes it happen.”