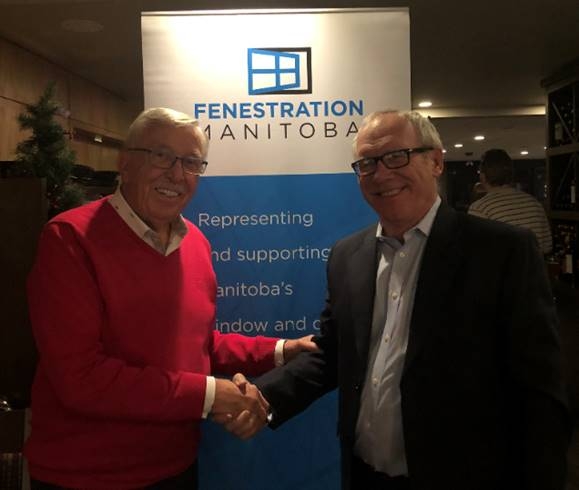 Bill Fast, retired founder of Willmar Windows and C.P. Loewen award winner, was thanked by Fenestration Manitoba at its Holiday Networking Event on Dec. 11 for his generous donation of 50 backpacks towards the association’s drive to help the homeless through Siloam Mission. The donation was valued at $2,000 and led all donors. In all, FenMan collected 347 backpacks, each packed with items such as soap, toothpaste, toothbrushes, towels and other essentials to make life a little easier for Winnipeg’s homeless.

“I’ve seen the homeless street people at Siloam Mission who carry their stuff with them, in their hands, and that’s all they have in the world,” said Gord Seier of AGM, a FenMan director. “We’ve been working with the concept of finding something like backpacks with a few supplies such as a blanket or towel (and possibly a few other essentials) so the homeless people can keep their stuff and not have it in ripped plastic bags or worse yet loose.”

The Winnipeg window and door community really stepped up for this one. Other donors included: