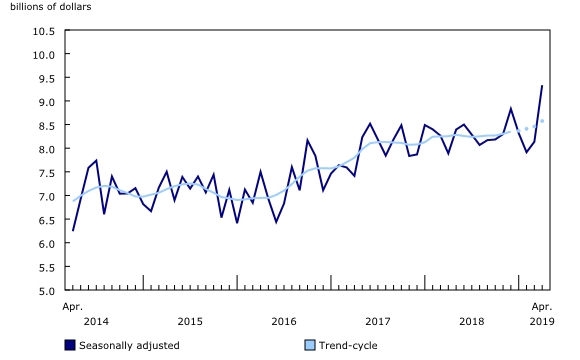 June 19, 2019 – Canadian municipalities issued a record $9.3 billion worth of building permits in April. The increase in the value of permits was almost entirely due to a planned change in development costs in Metro Vancouver.

Change in development costs drives increase
Nationally, the value of permits was up $1.2 billion in April, the largest increase since May 2007. Although six provinces reported higher values, British Columbia accounted for most of the gain. This was due to permits being issued ahead of the development cost increase in Metro Vancouver in May, the first change in costs in that region since 1997. Meanwhile, Quebec reported the largest decline, down $147 million from March.

Multi-family dwellings in British Columbia boost residential permit values
In the residential sector, the value of permits rose 24.5% to $5.9 billion in April.

Municipalities in British Columbia issued $2.2 billion worth of residential permits, almost doubling the previous record set in June 2018. The provincial increase was driven by multi-family dwelling permits issued in the census metropolitan area () of Vancouver (+$880 million).