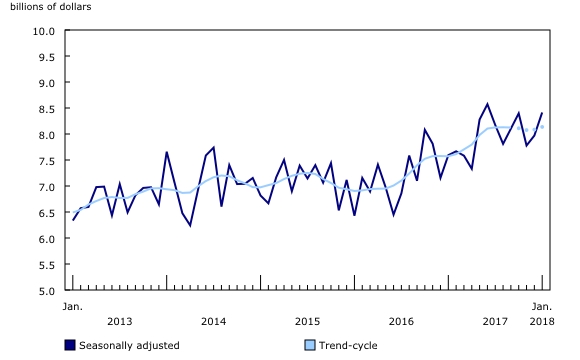 Mar. 8, 2018 – Canadian municipalities issued $8.4 billion in building permits in January, up 5.6% following a 2.5% rise in December. The value of permits for three components rose, while industrial buildings (-18.6%) and single-family dwellings (-1.3%) declined. The January increase was largely due to higher construction intentions for multi-family dwellings in Ontario.

Toronto leads the gains among census metropolitan areas
In January, 16 of the 36 census metropolitan areas (CMAs) reported gains, led by Toronto. The total value of permits reported by municipalities in Toronto increased 25.5% to $1.8 billion in January, following a 14.0% decline in December. The increase mainly stemmed from multi-family dwellings, which hit $590.3 million in January, bouncing back from $311.0 million in December, the lowest point in 2017. The second largest gain was reported in the CMA of London, up 89.3% (+$77.5 million) from December, also due to multi-family dwellings.